A new version of the Spotify iOS app (0.4.23) has just been released, giving 320kbps streaming quality amongst other improvements. Can you please realease a new version of the Spotify Android app which is functionally equivalent to the iOS app? We need playlist folders (which iOS has had for some time) and 320kbps streaming. Or is Android always going to play second fiddle to iOS in Spotify's world?

As many of you know, we released the new version of Spotify for Android to the Google Play Store yesterday complete with the following features:

As a result, my first inclination is to change the status of this idea to "not planned". Our logic is this: The wording of the idea suggests that in order for one version of the Spotify app to remain "functionally equivalent", Spotify would actually have to hold back the release of another version of the app.

However, I shy away from changing the status to "not planned" for fear that the status could be misinterpreted as an initiative on the part of Spotify to refrain from updating the Android app in the future, which is certainly not the plan.

I'm going to go ahead and and change the status of this idea to "implemented" in light of the recent release, but I would like to remind folks of the inherent nature of app development and circumstances which could arise which leads asymmetrical development of applications.

320kbps mobile streaming? From where do you know that? At least it isn't mentioned in the App store description for the update. Hope you're right!!

If you upgraded from the previous version, the notes mentioned in the iOS version are - 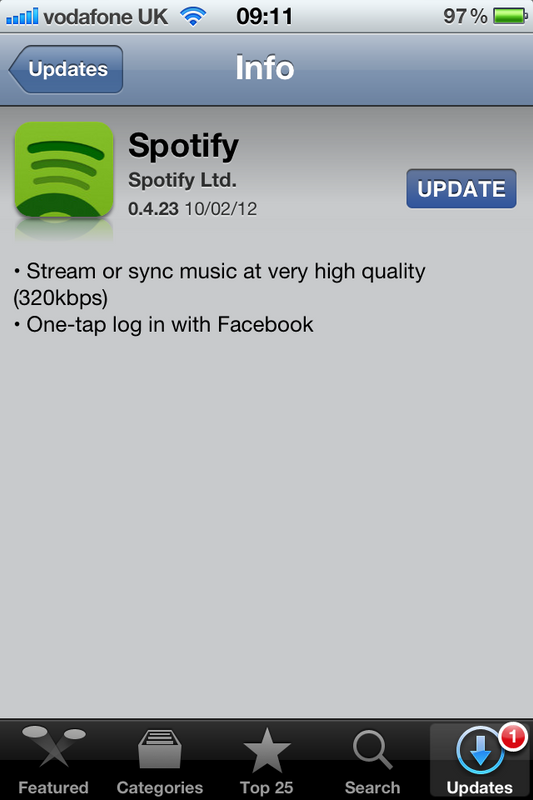 We haven't forgotten about Android, though, certainly not...

I just discovered playlist folders and spent some time setting up my computer to use them.  When I go to my paid mobile subsciption (android on HTC incredible 2) there are no playlist folders.  What gives?

I expect an Android update within the next couple of months, but this will likely be to enable support for Honeycomb and Ice Cream Sandwich. Playlist folders, album art, "extreme" bitrate streaming... these are all nice-to-haves and don't impact potential revenue in the same way as the app not running at all on newer devices.

I wrote a post comparing Spotify on iPhone vs. Android last summer:

The iPhone version was vastly superior then and still is.

So I think the answer is yes, "Android [is] always going to play second fiddle to iOS in Spotify's world."

Scooby359
Casual Listener
Android isn't as much competition to Spotify as iTunes is. Make more effort for us Android users though, please?
0 Likes

Please update Spotify to fully support Android ICS 4.0 and Galaxy Nexus. The app hasn't been updated in a while and there are bugs. And you should really update the interface to match the new standards in ICS 4.0. C'mon Spotify, you can do better!! The WP app is alot more customized for its operating system.

Agreed. I'd understand if Android had a low user base but it's massive.

I have both and iTouch and Android phone and have noticed that the Spotify apps are different.

The biggest thing is to have playlist folders display the same as they do in the iPhone app instead of just one big list off playlists.

I love my playlist folders in both the windows and iPhone app.

This is a duplicate of an existing idea: http://community.spotify.com/t5/Spotify-Ideas-and-Feedback/Please-make-the-Spotify-Android-app-funct...

yup. but i have some performance problems too with the android client. we need a better optimized app.