Turn down the volume of loud ads

Prevent ads from being louder than the song that came before it. I know the point of the ads is to annoy us into paying up, but it can be very painful to turn on some relaxing tunes after school/work, turn up the volume a bit to hear the quieter details, and then have a surprise advertisement blaring some awful hiphop noise or a screaming spokesman blast 5 times louder than the song. Just normalize the volume of ads so that they aren't louder than the song they follow. Ads should be the same volume as the music.

This can be implemented by having an internal variable to measure the average volume within the song, and then set the ad's volume to that **bleep**. This way, classical concertos are recognized at the lower volume they are, and the next ad won't be 5 times louder than the loudest part of the song. Or just have a "advertisement volume equalizer" checkbox somewhere in the account settings. Or let us turn up the volume for just one particular quiet song within a playlist, so that everything else plays at normal volume.

To all fellow Free users, please take my survey on what you do when an ad is BLASTED at you- I'm sending the responses to the companies being promoted by obnoxious ads, to let them know that loud ads reflect badly on them when we rip off our headphones. Also, contact the companies whose ads are BLASTED at you, and ask them to tell Spotify not to blast their ads. Shari's Berries apologized to us, and a McDonalds rep said they only design ads. Keep it up! Contact the marketing department of these companies and politely ask them to demand a normal volume for their ad. 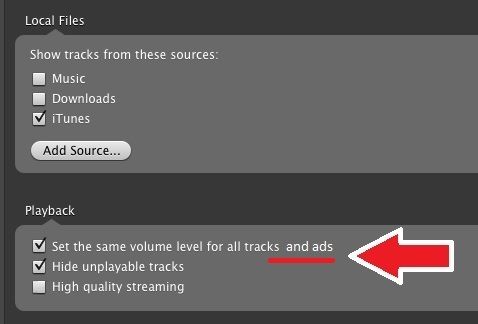 Update Sept 27, 2017: Thank you so much for taking my survey about how you react to loud ads - it has 1,571 responses! Here are the results - please show these to companies whose ads are blasted at you!

Answers to Other (Please specify)
10/14/2014 1:11 PM: I tear my headphones off, then lower volume on spotify, then press play (cause lowering volume to bareable pauses the ad), wait for it to finish then pause the song after the ad so I can turn the volume up again

9/26/2014 12:12 PM: Contact the company and point out that I am going to avoid their products until their ads are played at a reasonable level.

Hi everyone, we appreciate your feedback here in the Spotify Idea Exchange around our ads for Free users.  Please know that we have applied audio normalization to all of our ads and that all new audio follows the same volume guidelines that we have for Spotify.

If however you still find a specific ad is 'too loud' or has disruptive sound effects, like car noises, please post the specific details below as per the instructions in this thread - we'll make sure to pass it on to the right team.

Thanks again for all your feedback!

If television has to quiet their ads, this should be also made to apply to other services. Spotify, we love your service but don't ignore our request. If you were in our place, you would agree. Ads are important I know to keep spotify going, but so are your users. Pretty elementary, Sherlock.

Spotify, I USE to use iHeart, but I'm sold on you now. So I do add compliments.

+1 from me, because I listen to classical music a lot here, as Spotify has many great albums from that genre. The difference between this kind of music and the audio ads is way too big, I have to lower the volume at least to 50% too often.

Definitely needs to happen. The ads are too loud.

Think about it: whenever these stupid ads come on at some multiple of the volume of the last song played, we all have to take the headphones off, or mute the computer (then hit play again while it's muted, because muting pauses the ad), or quit Spotify and go back to Pandora for a while, because if we don't, our ears will be permanently damaged. No matter which of the aforemenioned options we choose, the end result for your sponsors is that the ads are not actually being heard. And when we go to Pandora or iTunes for a few hours, no Spotify ads are being played, so everybody in your sphere gets less revenue. Not that the artists were getting any of it in the first place. But that's a different conversation.

That, and ads for all those idiotic cookie-cutter hip-hop songs make no sense for somebody who's in the middle of a Mahler symphony, or Chopin preludes, or anything of that ilk. Think about targeting those ads a little better, based on recent plays or starred songs, or whatever. Otherwise, the people who buy ads on your platform might eventually realize their money is completely wasted, because we're not going to buy their crap no matter how many times they inflict it on us while we're trying to do something moderately intelligent. Or maybe you guys thought Harrison Bergeron was an instructional manual? Also a different conversation.

But still: if you've never gotten to the end of a track that was designed to flow directly into the next one, and that marvellously constructed cadence dances tantalizingly on the edge of resolution, and you want to get back to tonic so bad, your whole body quivering with desire for everything in your ear to be carried poetically back to where it all began, when suddenly, out of nowhere, some whiny autotuned snotrag jumps out the computer screen and slaps you in the eardrum with his latest cover of "imdabes", bragging about what a whiny irresponsible snotrag he is, just like the other four hundred and thirty-five thousand five hundred and twenty-one like him who already wrote the exact same song with a slightly altered beat, then let me tell you what it feels like: there are levels of rage that you didn't even know existed yet, and you will experience them all, from the top down, while you bandage up that bloody eardrum, and you will curse Mr. Whiny Autotuned Snotrag #435522 with every curse you know, plus a few you just made up, and you most likely will not purchase his song.

Open letter to the guy who wrote the crappy song in the ad: There is no doubt in my mind that you have the potential to be a charming young person, who respects his elders and does honest work for honest pay, a shining example for our youth to study hard and stay sober, etc. But it doesn't look like you're there yet. I'm not criticizing you personally for your failure to reach maturity at a reasonable age; I'm just saying it's easier when you put some actual effort into it. And I do have one small piece of bad news: ur not da bes

Agreed. Those ads that start blasting awful 'music' along with an irritatingly excited announcer makes me despise both as well as whatever product they are pushing. Spotify does need to look into targeted ads, but for now they REALLY need to equalize the ad volume. TV can no longer have louder ads (the C.A.L.M act), and streaming music should follow suit.

Most of us mute the commercials or rip off our headphones, so there's no financial/revenue benefit to making us angry every 5 minutes. So keep spreading this page- we need more KUDOS!!

We have a super Spotify genius. This issue should be up to battle more often when there should be more of a solution than money. I really need to know who wants to have a Walgreens advertisement busting up your good music. Nobody likes it guys 😄

I switched to a hacked version of spotify. I will continue use that until the a-holes that are the spotify team fix this issue and enforce ads at the same level as the music.

My hearing got damaged due to this illegal technique they use to annoy people into purchasing.

Hearing loss do not heal or get better. I will use this version until they pay me to stop.

Only ideas with 40+ kudos should have the good idea status.

i came here to post the exactly same problem.

My suggestion is to simply ad a volume control for Ads. but ok ok, "un mutable" so that you earn your ad dollars.

its really annoying the volume of ads being as it is.

Rocio
Spotify Legend
Status changed to: Under Consideration
Hello there, The team is investigating about the volume of the ads at the moment, so we will come back to you when we get more information. Thanks for the feedback.
6 Likes
Log In