Use Spotify PC app to control another Spotify device

I have an old laptop hooked up to my stereo for playing Spotify (typically with the screen closed) and I've been using a third party app called Spotimote to control it.

Now there's Spotify Connect which is great but it's missing one thing: if I'm using my regular PC I'd like to be able to control the music PC through the regular Spotify app instead of having to pick up my phone and fiddle with the Android version of spotify.

So my request is: make the PC app a controller as well - as far as I can see there's no way to do that right now.

EDIT: michel123 points out that this idea is already implemented in the beta. Nice!

Latest beta is at http://community.spotify.com/t5/Help-Desktop-Linux-Mac-and/Welcome-to-the-Desktop-Beta/td-p/932803

Spotify Connect on the desktop version should now be available.
You can control your other devices from the Desktop: 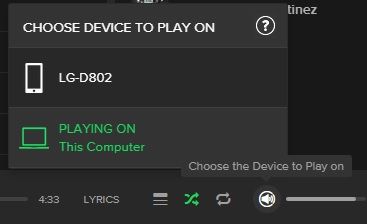 Enjoy this (Premium) feature and thanks for bringing your feedback to the ideas exchange! 😉

Marked as new idea, as it has not rolled out to the majority of Spotify desktop users.

I haven't been able to find this in the Linux Preview version of Spotify; can anyone confirm or deny if it's present?

Just installed the beta, just what I was looking for! In some cases it is easier to discover music on a laptop (sites, wikipedia etc in separate tabs easier access) and I always want to listen to it on a stereo,

I'm confused, installed the beta and want to control my Yamaha (spotify connect) receiver via my laptop. I cannot find the button to activate spotify connect, how to do this? Where is the 'connect' button?

In the current beta version (as of Dec 17, 2014), the volume control has moved to the lower-right corner of the screen. Clicking the small speaker icon next to it brings up the Spotify Connect menu. (This works with my Yamaha receiver).