Albums & Playlists: Have BOTH Play & Shuffle buttons at the top

Some users want to easily play the list in order and other users want to play it in shuffle. Some buttons are currently play and some are shuffle. Why not put both buttons there so we can choose if we want to shuffle it or play it? Right now to play in order you can press or click on the first item in the list, but with the different types of play buttons this is still confusing for most users. Shuffle can also be controlled by clicking on the shuffle button on the now playing screen.

Right now the play buttons are inconsistent across all of the Spotify apps. On mobile it was recently changed so now when you go to album pages, the button at the top is no longer a shuffle play button but instead a regular play button. Playlists still have the shuffle play button on mobile. On desktop all play buttons are regular play buttons and do not shuffle. See how confusing that is? Why not do like other music apps already do and have both a PLAY and SHUFFLE option buttons at the top of the playlist or album. Problem solved, you get to pick how you want to play it. Doesn't make sense how inconsistent it is currently. I never use the play buttons because you never know if it's going to shuffle or regular play. I just click the first song in the list to play the songs in order usually and if I want to shuffle I just turn shuffle on from the now playing view.

For artist pages you can just leave it the way it is now with only a shuffle play button since playing in order wouldn't make sense. You could still add it and pressing the play button would play their most recent releases in order. If you end up keeping the shuffle button then change the icon on it to a shuffle instead of the play with the little shuffle icon underneath it.

This is how it would look like at the top of the album and playlist pages in the mobile app. It would look similar in the desktop app too.

It would be better to have 2 buttons separately.
One to Play and one for Shuffle play. 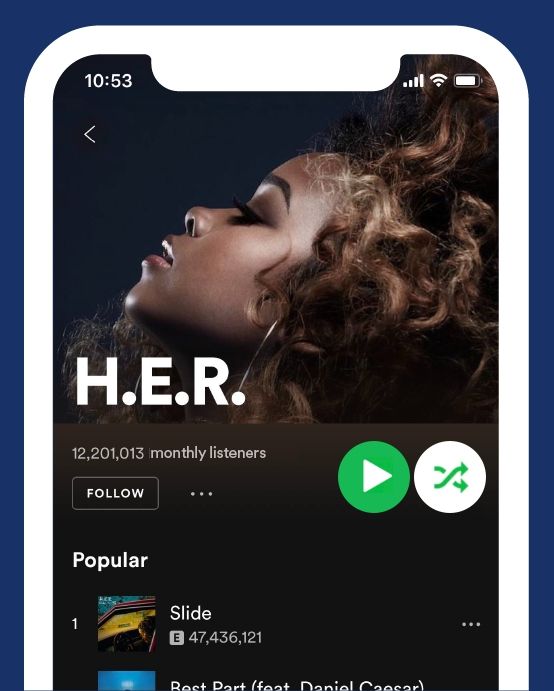 Recent IOS update has embeddd the shuffle button onto the play button when in albums or playlists. Can these be separated, I want to listen to albums or playlists in order and it seems to default to shuffle everytime I press play. Not sure what the logic between integrating the two buttons is but it's not a good experience at all. Can a future update set them back to two different functions. Thank you.

I agree on this and I was surprised that the new UI still had that unnecessary shuffle, why oh why?

It's been too long anyways, and I would have hoped to see this useless feature taken away long ago.

I have always listened to full albums and playlists as premium-user and never had reason for any shuffle. But when I had to shuffle I could enable it easily elsewhere.

I think Spotify should remove the shuffle-mode from that play-button and let people enable shuffle elsewhere.

The previous large shuffle-play that Spotify had for many years, did take too much space and was robust old idea of the past.

And I like to think that Spotify should enable this shuffle-play button only to free-users. I think this is only making harm to any serious music-listener and premium-subscriber.

It's not handy to push the play-button and then it will shuffle the album/playlist when you only wanted to listen to it all the way from the start until the very end.

I like the separate shuffle button as well. It’s so small now, I can never press shuffle on my phone easily anymore. Bring it back please.

Combining play and shuffle on the iOS app is not a great UX decision. Playing an album or playlist is a separate and unique action from shuffling an album. Shuffle seems like it would be better positioned on the same level as favorite and download. Separating it from Play, and making the play button the clear, primary action would make using the app so much easier. It's infuriating that clicking play actually turns on shuffling. You can only turn it off by viewing the individual song that is playing.

It seems random which lists have the play option or shuffle play at the top.  I would like it if every list just had both at the top, take the guesswork out of which one fits best.

Hello and thanks for bringing your feedback to the Idea Exchange. We've marked this as a new idea.

If you'd like to see this in the iOS app, we'd recommend checking this idea.

Spotify Staff will look into this idea once it reaches the necessary amount of votes. More information about how the Spotify Idea Exchange works can be found here.

It is extremely irritating how the Spotify mobile app doesn't allow you a simple and intuitive way to play the tracks on an album in the order that the artist intended. When you go to an album in Spotify you are only given the option to Shuffle Play, and I don't understand why this is the default option. Why not have two buttons - one for Play and one for Shuffle (I've done a mockup and attached to this to show how this could be easily done). Or, alternatively, have a Play button that if you press and hold brings up a Shuffle option.

Interestingly in the desktop program the default is to Play and you can then choose to change the play mode at the bottom of the screen. I appreciate that with a larger interface it is easier to offer more options and functionality but the disconnect between desktop and mobile seems perverse.

Thanks for submitting this to the Idea Exchange!

Spotify Staff will look into this idea once it reaches the necessary amount of votes.

There's a similar Idea you might want to look into and add your vote to.