This is not a new idea, but I haven't found any practical reply to it, so I think it needs to be repeated. I completely agree with Rennestein (screen capture below), we need to stop seeing irrelevant suggestions because it is annoying. Why can't it be possible to decide what we first see when we open Spotify on any device? (playlists, recently played, artists we're following, etc), and enjoy better our Spotify experience?
Please Spotify, let us have the home screen as we'd like. :)) Thank you! 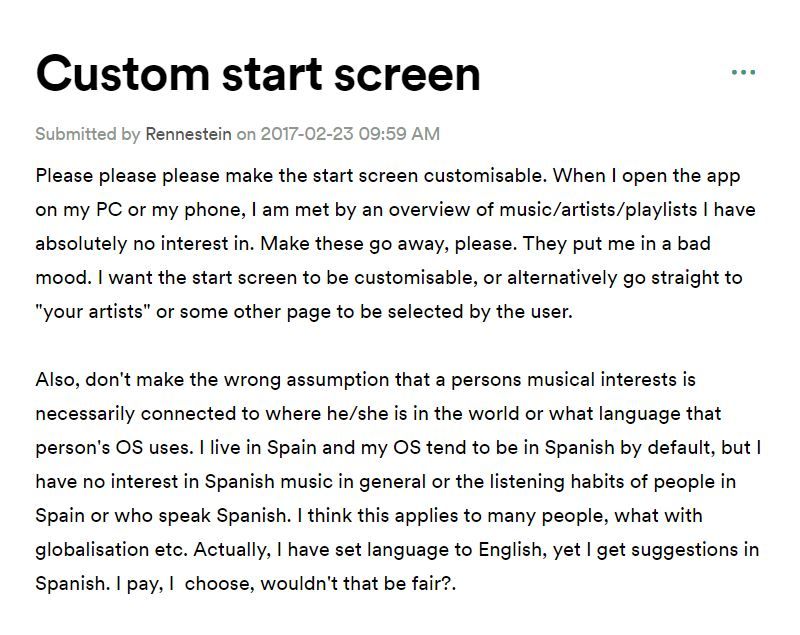 Hey folks,
We appreciate you coming to the Community, and adding your votes and comments to this idea.
We're setting this idea to 'Not Right Now', as this isn't something we have any immediate plans to implement.
If we do have any new info to share, rest assured we'll check back in here with a new status.
Thanks.

Seriously considering deleting Spotify over this. How is this suggestion over 3 years old with over 7,000 likes and there STILL is not anything close to this option. "Status: Not Right Now"--when exactly? If the answer is "Never" then just say "Never".

Thankfully, I was only paying 9.99 (10.81 with tax) but another issue I had is a song would play that I wasn't interested in, so I blocked it and it said "We will not play this song from this album again."  However, the next time I played that album, it would play.  Although I would still like to keep Spotify premium, I just got notice that my job is ending on the 2nd, so I cancelled my subscription the day before it was due.(whew). Hopefully, by the time I get another job, they'll have the issues fixed and I can come back.  While Apple Music Individual is the same price, I really don't want to have to install iTunes on my work computer and depending on the job I get, I might not be able to.

You don't have to install iTunes, Apple Music has a web player, just like Spotify.

Haha. Now musicians started pulling their music from Spotify due to this controversial podcasts feature. LOL. You should have stayed away from politics, Spotify! I told you so long before.

They're not going to do anything anytime soon, if at all, much like optimising their Mac app for the M1 chip. I'm at Apple Music now, so much better, for the same price.

Thank you, Eurohilli. I did not know that.

Seriously, the Apple Music sound quality blows Spotify clean out of the water. I have tested on my B&W HiFi and Bose QC headphones. The difference is remarkable.

If you're feeling adventurous, and your internet connection, storage capacity and hardware allows it, you can stream/download Pro-Res, at about 150MB per song. Again, all this for the same price as Spotify, just 10 bucks a month. Oh, throw in Dolby Atmos for no extra charge.

They will never allow you control over the home page. The home page is how they leverage their algorithm for maximum "engagement." It's literally their business model.

They don't care about usability. The faster you find what you're looking for, the less time they have to influence you to do something else.