[All Platforms][Playlists] Add the same song to multiple playlists simultaneously

To avoid this dilemma, I have spent hours and hours sorting through all my favorite songs and making different types of playlists that they may fit into. One thing I learned early on is that a particular song is likely going to fit into multiple playlists, and this is where the problem lies and the primary reason why most people avoid making well thought out playlists altogether.

In order to add a song to all the playlists I want, I have to sit at my computer and continuously drag a new song I want put into different playlists into each individual one over and over again which, when organizing dozens or even hundreds of songs, can take an insane amount of unnecessary time. And that is if you happen to be creating and organizing playlists on the desktop app… if you are trying to do this on your phone, you might as well forget about it - it would take you an hour to add 20 different songs to 10 different playlists.

Attached is a picture originally posted by a subscriber named anaraee who had requested this a few years ago, but apparently wasn't able to get enough traction then... hopefully this time will be different. 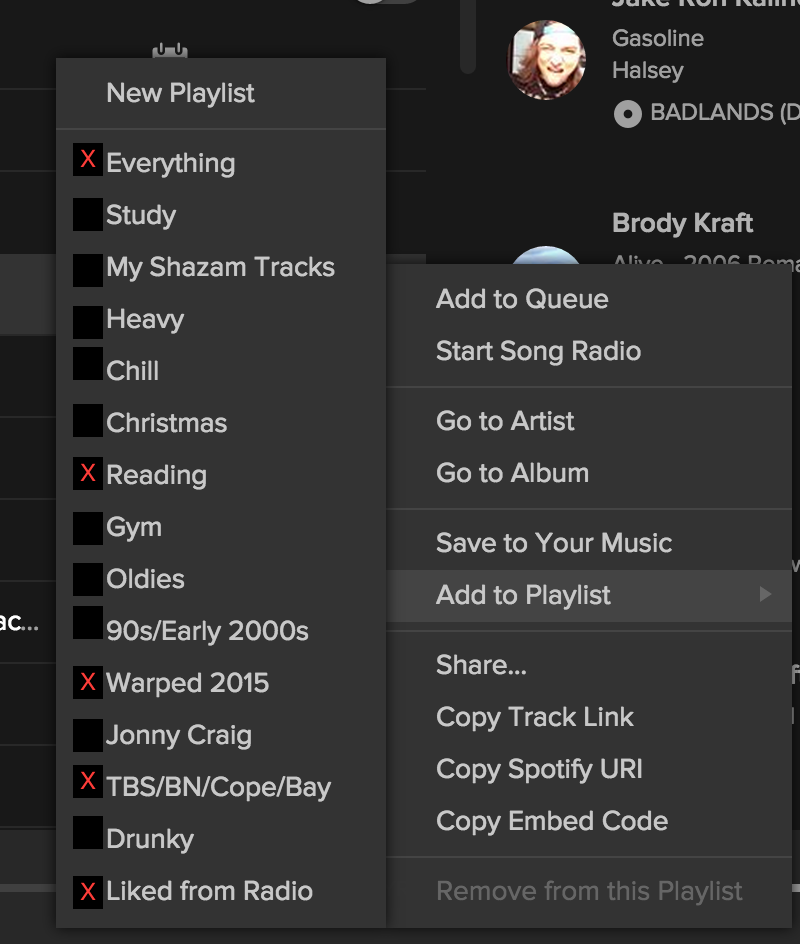 500 votes and still no action from Spotify. My premium subscription just got £2 a month more expensive, and yet, they can't implement what many have said is a very simple but very useful function. Time to step up...!

Completely agree, I've been dreaming of this ever since I started using Spotify. It's surprising such an obvious feature doesn't already exist. There's clearly support for the idea and it makes COMMON SENSE! Come on Spotify, let's make this happen!

It would be nice if users could add a song(s) to multiple playlists at once. So for example, I could find a song and add it to 5 playlists in one go, rather than one by one adding it to a playlist. Or I could add let’s say 3 songs to the same 5 playlists with one click. Additionally, it would be nice to add multiple songs to a playlist at once from liked songs, an album, or another playlist. For example, transferring all songs from one playlist into another or being able to scroll through liked songs and select all songs I want to add to a playlist at once rather than one by one.

Please make the feature happen! It doesn`t seem that hard to make it possible that you can tick boxes for playlists you want the song to be added to

An “add to playlist” option for songs that allows you to pick multiple playlists in one go and select “done” when finished. It’s a nuisance to repeat the entire process about 3-4 times when we could just select multiples.

As someone who is currently sorting songs into playlists, I feel like there should be a way to add one song to multiple playlists instead of having to add songs to one playlist at a time. For example, there could be a checkbox where you tick all the playlists you want the song to be added to.

still waiting for this feature to be implemented, I think we would all greatly appreciate it! 🙂

We are waiting for years for this feature and still nothing happened. It's sad to see that nothing is happening... 😪

I have had the exact same problem as described above and thought of something similar to solve this issue. So that you can see when you click on the song on which playlists it is already and where songs are that have the same or a very similar title to not have a song with 5 different versions in a playlist just because it does not tell you it is already in there because it techincally is not but a very similar song like remix or remastered version. Of course there are times when you just want that so you should make this possible too but you should be notified when it happens.

To not make this too complicated i would propose changing the current add a song to a playlist to like click on the song info or something to see where the song is already and then be able to just click add to playlist 1, 2, 3, download or like besides just make a new playlist from this menu and add the song to this new playlist.

In the end you of course have to organize the songs in these playlists like it is now and be able to play them shuffle and in a row. By the way why can not you click on the playlist where shuffle is and change it to playing all songs in a row?