[All Platforms][Your Library] Increase maximum Songs allowed in Your Music

I feel like the maximum amount of songs allowed in one playlist, and subsequently in "Songs" playlist under the new "Collections" feature, should be more than 10,000.

Quite frankly it should be unlimited.

We are paying for a service but limited on how many songs we are able to save? That is absurd to me.

I recently started saving all of my albums into "Collections" and got stuck at about 1/4 of the way through - 10,000 songs has been reached and I am no longer able to save any more albums.

WHAT IS A COLLECTION IF YOU HAVE TO LIMIT YOUR TASTE???

Thanks for coming to the Idea Exchange.

We're excited to be marking this idea as implemented!
We've now removed the limit on saved items in Your Library, making it possible to save songs, and albums on Spotify to your heart's content.

As the app has changed quite a bit since this idea was submitted, please be aware that some functionality is now different. This change does not impact the limit on the number of songs in a playlist other than your Liked Songs.

dahlbs
Newbie
I believe it is fixed now. Check it out

Why do you think so @dahlbs? Did you test this already?

It would be great if this is fixed. 🙂

I just re-read Spotify's response (from 2017) and this jumped out at me:

I wish they would explain, HOW would removing this limit lessen the experience for ANY users?

I would bet all Spotify playlists are stored as basic textual data, just lists of words, with just a few strings of text per song. Are they really claiming that letting 1% of the users have double or even triple the amount of titles in a simple text list, or even 10 times that number, is actually going to crash their servers? THAT'S CRAZY. It really can't be true. They are storing millions, billions of digitized songs, which take up gobs of space. Any amount of text lists could fit in the tiniest corners of all the servers they have for the songs.

Their freaking spreadsheets take up more space than any amount of expanded lists would. They are just making stuff up on this one. I am shocked that paid users are restrained in this fashion.

@dahlbs Huh, so they must on a slow roll out. Anyway it's been fixed for me since last month or so. 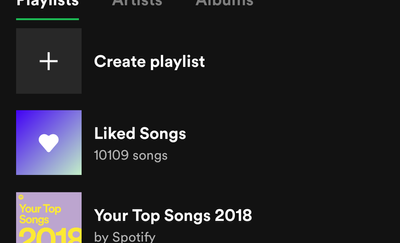 Why Spotify didn't say anything here in this thread? 😕

What are you doing to prove this is fixed? Any screenshots you can share?

You should consider that people have now been members for nearly a decade. This problem isn't going to go away. It may be a small percentage today. If you intend to be our streaming service of choice for years to come, you will need to pull back this restriction.

Well it took many years, but looks like it is indeed resolved! 21,029 songs sitting in Liked Songs and no “epic collection “ messages.