If I drag an album into a playlist folder, an entry is made which puts the album title first, then the usual em-dash and then the artist name.

Because there's no way to sort or create nested lists in the Artists or Albums sections, I use playlists and playlist folders to organize music by category, by month, by family member, and sometimes as a to-do list. Having new entries show up as an album called The Beatles by a band called Revolver becomes exhausting if I'm browsing for new music and setting aside things I want to listen to later, so I usually do it the other way: right click the album entry, then add it as a new playlist from the drop-down menus.

Here is where it becomes even more obnoxious. Because if I already have that album in some other folder, the artist is now The Beatles, but the album is Revolver 2. Occasionally this will even happen with a brand new release. I have yet to figure out what causes the system to think it's creating a duplicate in this scenario, but it happens pretty regularly.

It gets weirder. If I have an album called Anthology 2, the duplicate is named Anthology 2 2. If I make yet another duplicate, it comes out as Anthology 2 2 again. It never adds a 3 or a 4, or an extra 2. Far from being a system for (unnecessarily) avoiding duplicate playlist names, this behavior sometimes creates them. What is causing this? 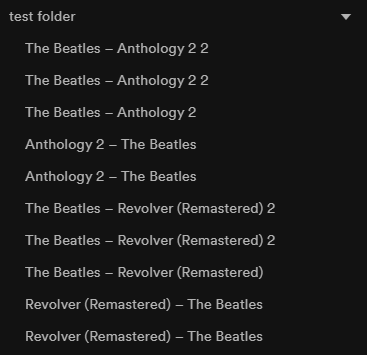