Currently, the only way to listen to unplayed podcasts on desktop is to open a phone and check the feed there, or check every podcast individually for new content. That's 100% unacceptable, and has been for years.

Give us a podcast view that we can sort / filter by unplayed episodes or recent uploads. If you want to be the industry leader in streaming, you can't ignore table-stakes functionality because of "100 kudos" horsesh*t.

Credit to user futtander who submitted this idea in March 2019 and who didn't get to the needed votes which is ridiculous as this is an important issue for those of us using the Spotify Desktop app.

The Desktop app Podcasts page (both macOS and Windows) layout lists only podcasts series you are subscribed to. This is unlike the iOS app which also lists podcast episodes by date episode was added (under the 'unplayed' section).

Podcasts come out with episodes at a daily/weekly/monthly intervals and are consumed on an ad-hoc basis as they come out, a revised Desktop Podcasts page layout for your apps is needed which shows the episodes listed by data episode was added (reverse chronologically) is much needed. Given your company's investment in podcasting, the lack of support for this on Desktop is unfathomable. This is addition to the inability to mark individual podcast episodes as played or unplayed on desktop as you currently can in the mobile apps.

This change would would make it much easier for desktop users to find which of the many podcasts a user subscribes to has come out with a new episode, instead of clicking through each podcast and checking, or looking on the mobile app, marking episodes as played if needed then having to go back to listening on desktop. There needs to be a seamless desktop and mobile experience for Podcasting. 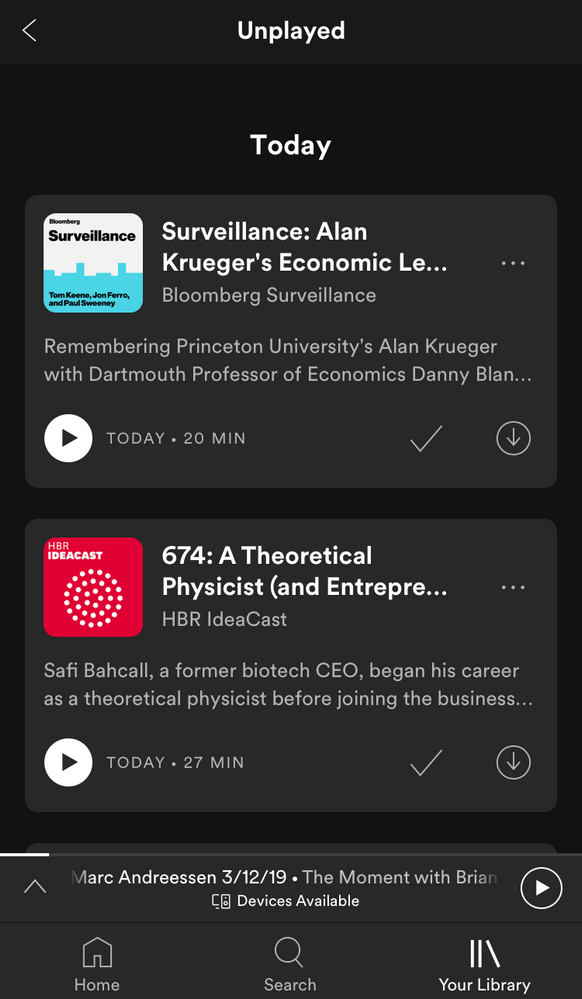 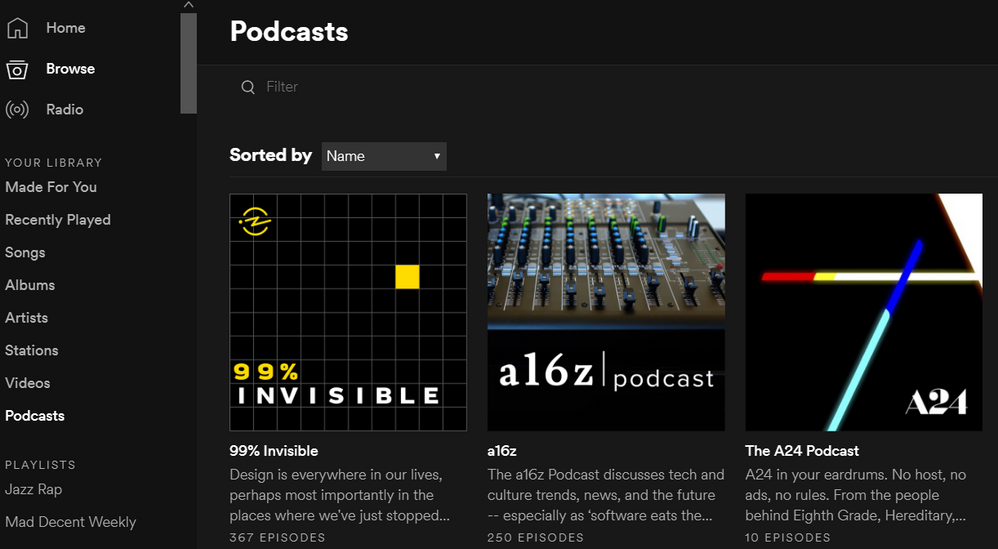 Please Spotify, podcast in Spotify is useless on Mac until you add this feature that should be there from day one...

How can we rally support to ideas if you dont allow us to DM more than one person a day?

This is incredibly frustrating. This "idea" is floating around here in different iterations at least since 2017.

In normal circumstances, I would absolutely understand that "new" feature for podcast listening on desktop wouldn't be the highest priority, but implementing a feature that already exists on other platforms?

And we are not talking about something technically difficult. Just simple sorting filters.

In current state, both web and desktop players are absolutely unusable for podcast listening. I am not going to click on every show just to see if there's something new.

I agree and will be looking for a better streaming service

Yes please! At this point I use the mobile app to search for episodes and just play it through my desktop.

Is there any update???

In my searches, I am shocked this isn't a 'feature' on the desktop client! I just want to see my newest podcast episodes the same way I can on my phone.

Right now I'm forced to look at the newest episodes on my phone, start it on my phone, and then switch my audio device to my desktop via the desktop app. It seems like the implementation of that awesome, multi-device feature would be a lot harder than simply creating a list-view on the desktop client podcast page.

Thanks for your time, and I hope you are able to implement this ❤️

Yes, please! I do not find sorting by "Recently added" helpful on the desktop app. Please add "Recently updated" so that the shows with new episodes can show up at the top of the list.