please reduce wasted screen real estate in the desktop client. Right now, there is too much wasted space that could have been leveraged.

Here are my main gripes:

1: I admit that there is not too much you can fill this area with, but you could move the menu bar and the window title there. Now, two "lines" are essentially lost.

2: Fill this area with information and statistics. And for God's sake, why do you not let users add descriptions to their playlists? Partners and labels can, so why can't we?

3: Why did you add this space? I see no logic behind it. And the play button that appears when you hover over a list item is completely unnecessary. Just double click. It's much faster, as you don't have to move the mouse to that tiny little are on the screen. And if people don't know that they can double click to play a song, they should not be using a computer. All major OS' use double clicking for various tasks.

4: There is absolutely no reasy why this space should be there!

5: Reduce the space between people in the activity feed, so that you can see more of them!

6: Reduce the space between list items. It might be easier on the eyes if there is a large amount of line spacing, but it makes for a tedious and inconvenient browsing experience. 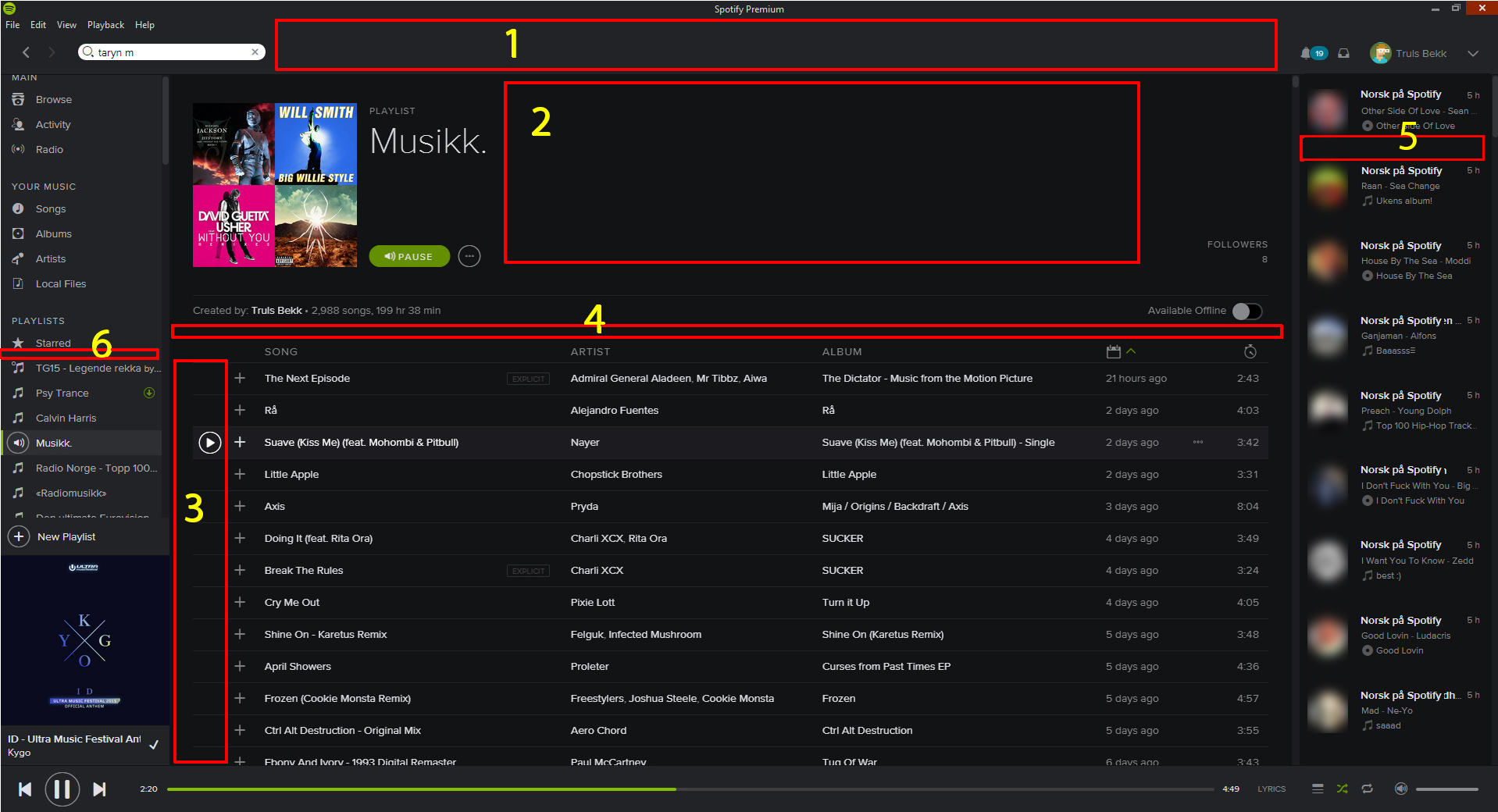 My suggestion for the UI: 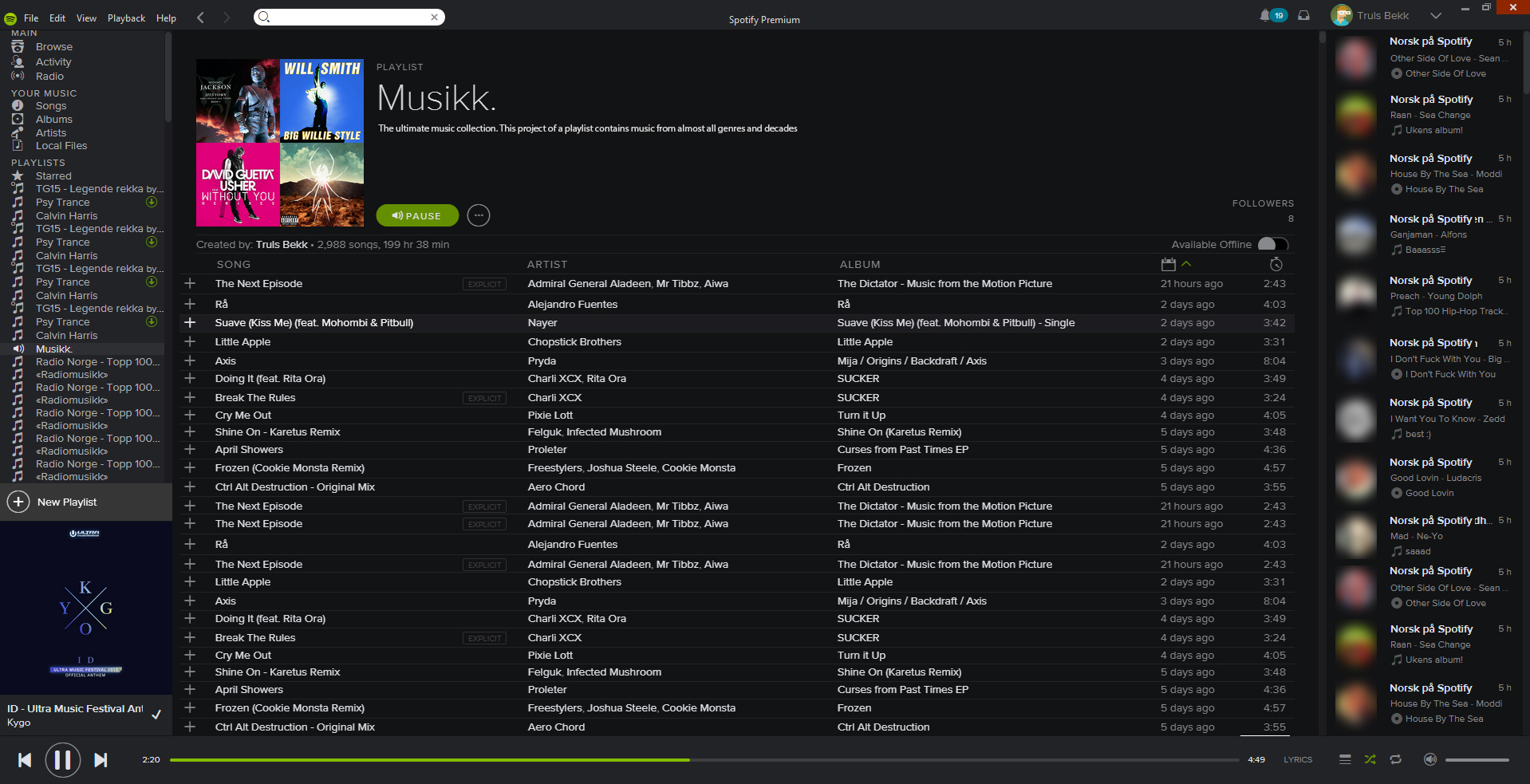 (Some line spaces are uneven, because I used Photoshop.)

Hey everyone, as this idea has reached 100 kudos we're giving it a status update. Please continue to leave your feedback here. Thanks!

I don't want this.  My monitor is large enough and I like having a design that breathes a bit.  I don't miss Winamp.

I personally like the UI the way it is.

It contains a lot of elements already, but the way they are separated by space is eye pleasing.

The main problem I see with reduced spacing is elements fighting for your attention and you don't quite know where one logical chunk of information ends/starts. You kind of have to fallback to comparing font sizes and other ways to figure out what is what. Spacing on the other side is easy to get and it is one of best practices for user-friendly UI.

I get this feeling that many of the people who oppose this idea have either (or both):

- not used the older clients

- not understood that the image in the post is a mockup. It's not how a final, more compact UI would look.

That being said, the images are still very helpful for pointing out some of the flaws of todays interface, and for that purpose, they do the job really well.

TrulsBekk deserves all the Kudos he's received and more.

I understand it's a mock up and have been using Spotify for years.  I don't want a cramped UI.

@ stuartq I have a small monitor next to my main, which mainly is used for spotify. sub-HD resolutions does not work very well with this GUI. Why not let us choose? or maybe adapt to the resolution.

@olli408 I've no problem with there being an option, like on Gmail, but I personally will not be using it.  I thought it was important to add my voice to the mix, since those in favour of change are more likely to be vocal.

Having said that, I do like idea 1 to make more use of the title bar, as Chrome does.  However, I'm not in favour of any of the other changes.  If there is a "Compact" view for those that do, then finee - but don't clutter up my UI! 🙂

I'm not saying it applies to everyone, and I believe that, as some others have pointed out, an option like in the Gmail client would be the best way to go about it.

But from all the comments left on here, none of them (except for you maybe) actually express that they prefer the new client over the old (until 2014 i believe) client in terms of spacing.

All I've seen (again, with the possible exception of you) are people expressing their preference with the current client over the mockup made in photo editing software.

Also, some more stuff not nessecarily in response to you, but rather just some more info I've gathered:

as an example, I'm just going to refer to what numbers I've found:

91 of these do have a touchscreen, so you could make the argument that these should be left out, as large spacing is often beneficial on a touchscreen.

Prisjakt does not let me easily compare how many of these are being sold, so i can not say for certain that x percentage of computers being sold have this resolution. But I would still argue that this gives us some indication, as I believe the laptop manufacturers would try to meet the demand where it's at.

The steam survey also speaks pretty clearly about what people own, and about 40% of computers in that survey have a resolution of 1366x768 or less.

Even a fraction of those numbers are still way too many people to disregard when designing a user interface.

Now I actually don't own such a device because I've cared for resolution for a long time, but I've seen enough both in reality and online to see that it is a massive downgrade from the older (pre-2014) clients. It's not unusable, but it's not practical.

I don't know if Spotify does hardware surveys, but if they do, I'd love to see if their numbers are similar.

Even if this only was an issue among low-resolution users, I'd find this enough of a reason to add a compact view option.

But as seen in the post(idea) and comments here it's not.

It's upsetting to see a service I've used to love (and paid for years) take this turn, and I really hope spotify takes another look at this.

If I've made any mistakes, or if I'm wrong and you know why, feel free to correct me. I've got email notifications on.

To anyone who actually read this, thank you!

Even if nothing get's done, I appreciate anyone who cares to hear me out.

All fair points.  I use Spotify on 22" widescreen monitors normally.  Although I do sometimes use it on a 13" retina Macbook and still quite like it, but that's not my main machine.

I love the interface, its nearly ok on a 27inch 1080p screen, but I never fullscreen it as im a power user per say, I don;t normally have just that on 1 monitor, but its doable. Make the window small then thats where I notice scrolling is just to annoying with the amount of artists I have, Once you find the artist, the way it shows the music tracks, is perfect.

On my HP stream 7, Spotify well I don't like using it on that 7 inch screen, it wont show up like andriod as its windows tablet. Its just faster to view the artists and songs locally. Im unsubing from spotify, only reason is because I fine my self avoiding these little issues I don't like, Sure its great on my andriod phone, but at most that do with it is control whats playing from my desktop when Im laying in bed. I can do that with my media center and already bought music with my RF remote for my PC.

Good service for sure, just them little issues I fine my self avoiding spotify because I don't want the artist list loading for long and scrolling for an hour.