Submitted by Frostman233 2 weeks ago

Not sure who thought it was a great idea to reformat how one can view songs by artist or by title...? It is much more convenient to have the two, side by side, while viewing a library rather than only being able to view the artist name or song name under the other...

Now that every song row has Artist listed under the Title, every row is as tall as mu thumb, which means if I'm visually scrolling through a playlist, it's now twice as long and showing half as many tracks.

How old you think I am that I can only see 7 tracks at once before my brain is overloaded? I prefer the dense listing, it allows me to quickly skim through a playlist with greater accuracy.

(and of course, since this is Spotify we're talking about: the feature was just rolled out "because who Wouldn't ever want that" and there are zero settings to let the paying customer choose what they want).

Tell your friends everyone, the Spotify Community Guidelines say we need 1000000 votes or else we're not even worth listening to T_T

I'm advocating for a database-style view, where we can pick which columns we want to display, in which order, and then set that as our default view for playlists.

It took me a week to see that artists bio had gone at the bottom of the title column where it's pretty useless. if I want to see the tracks of a few early albums I have to scroll for hours back and forward, some artists have published 100s of LP, singles, compilations. I cannot even see the title of what I'm listening to if it's longer than 3 words; it doesn't appear if you point the arrow in the main column; it does not scroll if you point it at the bottom of the left column: dot dot dot it's all I see. I have to go look for the album on another website and check the track number. Have your web designer ever used the spotify desktop version? Thanks a lot for the pretty colours, that's what we pay you for don't we?  I'm having a look at your competitor, a light version comes free with my... deliveries 🙂 and you bet they'll catch up!

can you tell me what I'm listening to?

Now tell me what movement of this concerto I'm listening to ... no wait I'll check somewhere else ... 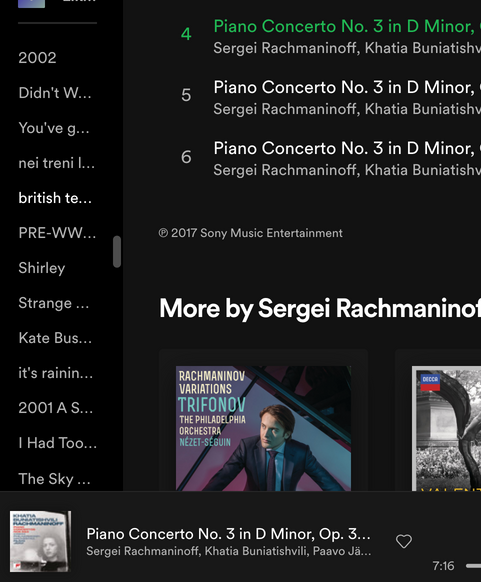 GianlucaBianchi
Casual Listener
maeveynot writes:
A good way to solve this would be to let users right click on the heading to choose which columns to display, like pretty much any media player app (e.g. VLC).

That's how it was before: you could chose to view the song titles in a list or as Album Covers, now someone decides for you.

Absolutely. In a world where single releases are far more common/relevant than albums, a whole column for the album is almost completely useless when more often than not the title of the "album" is actually the same as the title of the sinlge track.

I often sort my playlists by artist.  This is frustrating.  Is there some way to get that functionality back?

In a recent update the categories (artists, albums, songs, pods etc) became hidden under the subpage library. Previously you could access the categories directly in the left list, but now it requires an additional click. Simply worse in terms of UX.

As I understand it, the idea is that users will need to spend more time within the app. This is because the most convenient way to use the app is to make playlists, since playlists are directly exposed on the main page. Playlists are also the landing point after clicking into Library (making them appear twice on screen, which makes my point ridiculously obvious). Spotify is attempting to force the user to create content, making them more invested in the app. This is a dark design pattern and I do not appreciate it.

I support this point!

The change to remove the artist column makes navigating lists a chore. It is very difficult to quickly scan rows of data when the data type alternates from row to row.

Put the Artist column back where it belongs and decrease the row height back to what it used to be.

Or at least give us the option to. In it's current state the UI is unusable to me and I will be discontinuing my subscription if this is not corrected.