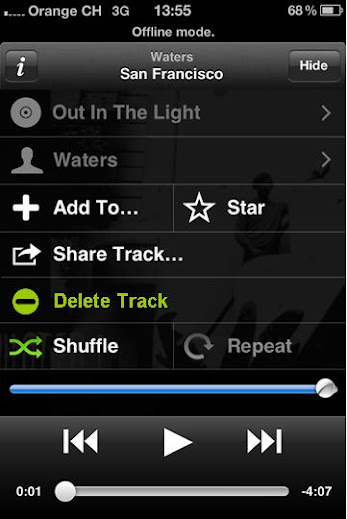 It is beyond ridiculous and self-serving for Spotify to offer no real option to delete songs on devices, or at all. also every time you reinstall the app it automatically defaults to autoplay, so they can load up your playlist**bleep** you would never listen to, then cannot delete. Spotify can then lie/boost play stats & inflate numbers to artists and advertisers. This **bleep** noncustomer support, not offering call in support to embrace their bogus non-customer support  forcing users to have a Twitter or FB account or use chat. Almost impossible to even locate an email address to contact alleged Spotify  support. All they do is tell you to reset your password or reinstall, advice that does not work.

Forget about their preposterous community/rockstar program inflating egos where customers are supposed to self-support? No support whatsoever. Huge ripoff,  more people need to complain about this.

"On iPhone, you can find the search bar by pulling down on the Playlist screen." Thanks! You're a lifesaver!

I can't believe this simple feature hasn't been added yet. The "Now Playing..." card even shows from which playlist the song is playing from.

Just from googling I've found multiple threads and idea posts regarding this exact issue, through all of the years since 2012. Each closed for not having enough Kudos a year to keep open, however somehow this one from 2012 stays open.

If I'm sitting on the bus and am listening to music and a song comes on which I would want to remove from the playlist, I just skip it because that is heaps faster than searching for it in my playlist. This obviously doesn't solve my problem and only annoys further when the song inevtiably comes on again the next time.

Can you please make a more efficient way to delete a currently playing song from a playlist?? Some of my playlists have hundreds of songs and it's too lengthy to scroll through to find the song to delete it. How about adding a "Remove from playlist" in the Currently playing view menu or as another user suggested, to have it be as easy as adding a song. Please?!

No more pain) I cancelled my Spotify subscription and switched to another streaming service which is much more user friendly. Thanks Spotify and goodbye

which streaming service is that? Im prolly going to

Having to search for a song to delete it is impossible/illegal on mobile when you're driving in the car.

Perhaps next to the "liked songs 💚" you add a "❌" to be able to delete the song you're listening to from the playlist in one quick tap.

Exactly! Also need option to delete from any playlist via dropdown menu &/or tap X to delete on android app & elsewhere.

which service is that? Spotify deserves that thousands leave every day because obviously they are completely deaf to the user's voice.

@DavidGP Like The up and fall of Nokia: We knows best and must learn the customer what they like.