I'm really missing the alphabet scroll bar for artists and songs on the iPhone Spotify app. Please return this feature! 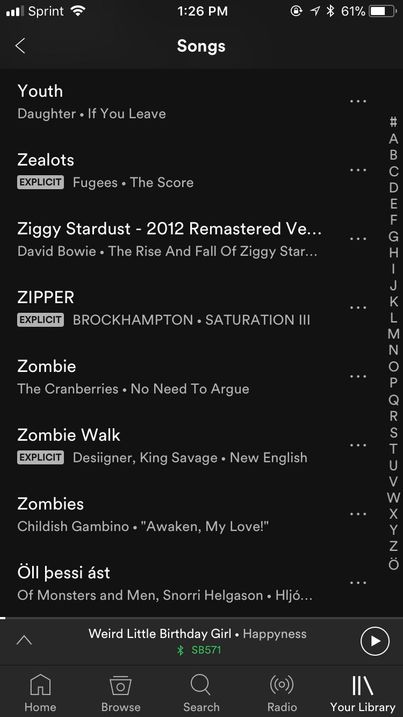 The A-Z scroll bar is back on iOS, under the Artist tab on Your Library.

We can see that there are users requesting this feature on Android too, so we'll keep the status as 'Not Right Now', so you can keep adding your votes.

Hopefully, Spotify will consider implementing this idea if it gets enough support so make sure to add your votes 🙂 You can find more info on how the Ideas Exchange works here.

Mcringleberry
Newbie
Agreed this needs to be added back!
2 Likes

Agreed!! Loved this feature and don’t like that it’s gone. Takes forever to scroll through all my likes songs.

What the **bleep** have you done Spotify?

Where's the alphabetical library of artists?

You've ruined this for me.

I'm off to buy a CD player and cancel my subscription.

That's not fair. I used the word for where the **bleep** lives and it has been blanked as if it was an expletive.

Really? That is pathetic. So the opposite to heaven doesn't compute?

I thought I had gone crazy but it seems this feature was really removed. Now if you want to listen to a specific song, you have to search for it in your library. Then, rather than shuffling your library when the song is over, Spotify stops playing music completely because it only plays the results of your search. What kind of UX is that? There was really no reason to remove the letters - it's not like they were taking up much room on the screen

If you're afraid of people accidentally tapping letters when trying to hit the "..." button on a song (a button much less used than the alphabet scrolling I must say), just move the letters to the left side instead of getting rid of them entirely

This was availabile until yesterday (6/18/19) for me on the iphone, now it's vanished.  Please put it back

The loss of the alphabet scroll is extremely annoying. I have a very large library, frequently hitting Spotify’s 10.000 item cap, so scrolling manually through all my albums without the ability to jump to a given letter is cumbersome. I don’t understand why this feature was removed. Please bring it back—there’s nothing to gain from its absence.

They brought it back only to remove the scroll search again in iOS update 8.5.7.601!

BRING BACK THE SCROLL SEARCH PLEASE!!!