[Playlists] Ability to link together Tracks in Playlists

Wouldn't it be great if you could "pair"/"link"/"lock" or "chain" tracks together in a playlist? Then even if you shuffle-played, certain songs would always play together. 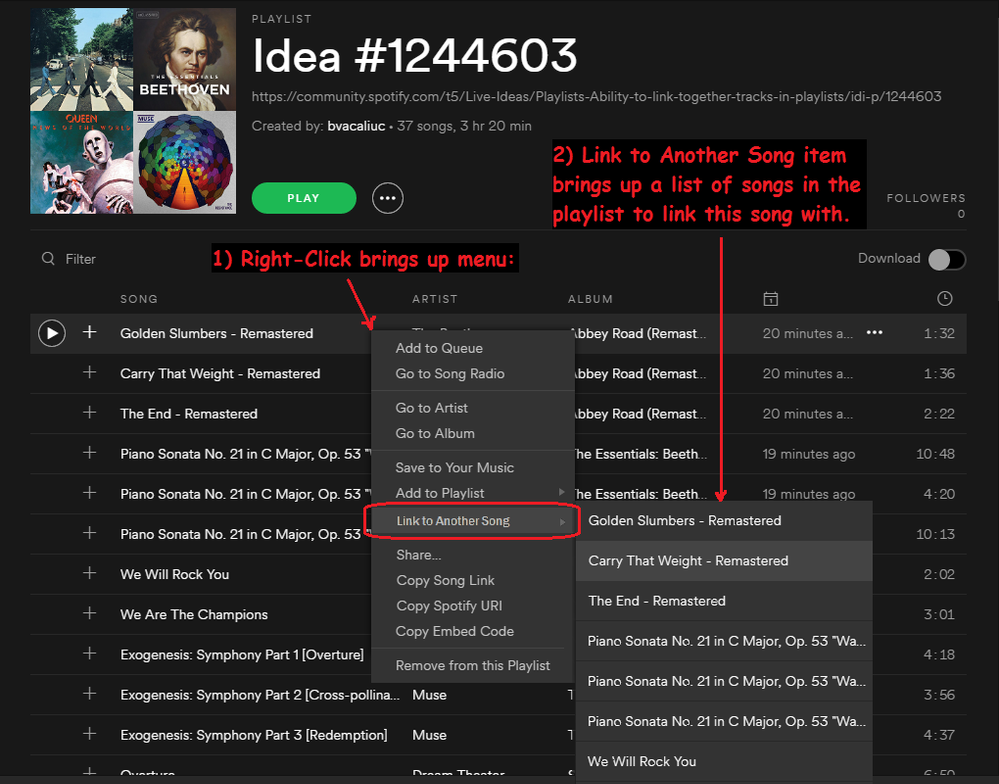 This idea was actually started by @Sartoris in 2012:

But in 2015 it was closed as not having enough votes. Coincidentally, about the same time, I signed up for Spotify premium.  As I listened to all the songs I've "liked" with shuffle, the one thing that kept coming into my mind was the terrible feeling you get when a song that is meant to follow another is not played.  You get the feeling of being violated; it is a terrible experience.  As I searched for this feature, I saw that idea was marked inactive and decided to open it again.

From the rules, we see that we needed to have over 500 votes to keep the topic alive in monthly discussions (check!). We also see that we need 100 votes per year to keep it alive (check again!). So we're in good shape on that front. Now we have to see what we need to do to get it moving forward from "Not Right Now" to "Under Consideration".

Again, from the rules above, Spotify says that they use these criteria:

Hmm. Ok. So I would say that playing tracks that are meant to be together really helps the artists because their work is rendered in the correct way that they intended. I'm wondering how many artists are dying inside when their specially arranged songs are cut up because someone shuffled their playlist?

I can't speak to Spotify's data and research, focus groups and surveys, or about their business strategy. However, it occurs to me that anything that affects the order of which song plays can affect revenue because Spotify pays someone when a song gets played and they don't pay the same amount of $ for every song... Sure its a tiny fraction of a cent, but it adds up. So my first guess is that Spotify's hesitation to implement this idea is economic. I think we should continue the discussion along these lines to see if we could come up with some kind of consensus on this notion.

Letting a song "pair" with another in a playlist would be enough to make a lot of people happy.  Would we be willing to put some $ behind having this feature? Lets say Spotify charged you $0.01 (a cent) everytime you were shuffle playing and the queue hit a linked song and played the one that came after it. Would you be ok with that? If not, what would make it ok? I think answering the economic question is one thing that is keeping this idea from moving forward. @wsmyth commented in May 2019 that he would be willing to spend $1/month for this feature. I would do that too, would you?

From the many, many great comments, @WesleyM77 posted in April 2019 a link to a US Patent. There are two patents, actually, [US8214740B2] and [US9396760B2]. Reading through the two patents, it's clear that they cover this idea in many of its possible methods. So apart from the economic impact, Spotify may be prevented by the patent holder from implementing this feature. It has been noted that only one service has this feature, and now this explains it. The patents expire in 2030.

So, here we are. We want a feature, someone has successfully patented the feature and so we can't have nice things. Everyone including the patent holders want to make money, so is there a price that Spotify could negotiate with the patent holder and then pass on to the users that would be acceptable to all parties?

Spotify, would you look into this and get back to us?

We're keeping this idea to 'Not Right Now', as this isn't something we have any immediate plans to implement. We appreciate you sharing your thoughts.

Marked as new idea and edited the title slightly to make it easier to find via search. 😉
This idea is a re-post of this inactive idea.

I think this also applies to classical music where most compositions are organized by movements. Two things that annoy me: 1) when ordering, movements sometimes do not stay together; 2) on smaller screens, you would get three entries "Piano Sonata No. 21 in C 'Waldstein' Op. 5...". Depending on the ordering, the first one might or might not be the first movement.

Organizing movements by compositions would solve this:

Magmystour
Casual Listener
I haven't had any music that bothered me if they were split in a shuffle playlist. UNTIL the Beatles became available for streaming. Abbey Road Medley would be a nice addition to the song list if we can't merge songs. There are other artists covering the medley as one long song, but it's like listening to cats dying in my ears.
11 Likes

As one of the "main" (as much as I can claim it) people supporting the previous version of the idea, I was disappointed when the response was essentially to say "Interesting idea, but we're not going to work on it". It strikes me as a case of the potential change not bringing in enough new users to justify putting time and effort into it, at least in the eyes of the developers.

That said, it's still a good idea. It would add actual functionality to the player in a way that no other player manages, and it would be simple enough to implement if they put a bit of thought into it. In fact several people in the thread for the previous idea suggested different ways to go about it from a programming standpoint.

And really there's no reason not to include it. Many songs from many genres were mentioned as being unfit for shuffle playlists without being able to merge the component tracks together, from classical symphonies and suites (often separated into different movements but in many ways better as complete pieces) to classic rock mainstays such as Queen's We Will Rock You -> We Are the Champions (although this is sort of a minor case since both songs make enough sense on their own, but you can't deny that they're better together) to more recent songs (someone in the previous thread mentioned Muse's Exogenesis Symphony; this is one I'd personally love to see this function added for). And in quite a few cases there's songs that have short introduction tracks that could improve the song as a whole to include. For a simple example: Pink Floyd - The Happiest Days of Our Lives -> Another Brick in the Wall, Pt. 2. And sometimes there's a long string of music that's broken up into separate sections but is meant to be heard all at once. The prime example, as stated above, is The Beatles' Abbey Road Medley (though I'd settle for just Golden Slumbers/Carry That Weight/The End if nothing else). And, though this is admittedly more my personal interest than anything super popular, I'd love to be able to put all of Dream Theater's Six Degrees of Inner Turbulence in one "unit" on a shuffled playlist and hear it all as the one song it was meant to be, rather than the eight components in random order at random places among all my other music.

I guess this leads into the purpose for me shuffling music to begin with. I like to mix things up, and not listen to the same music over and over if I can avoid it (putting aside when I get in a mood and listen to a song or album over and over, usually when I first discover it). So I gather a ton of music I like and put it all in one playlist to shuffle. (It's currently just shy of 1700 tracks.) But I've left a few songs out simply because they don't make sense on their own. Sometimes I put one song from a pair if it makes sense on its own, but often there's just something missing (this is often the case for songs with the "short introductory track" I mentioned above). Now, the fact that I can't get through that much music before the shuffle starts feeding me repeats anyway is an issue, but that's for another idea thread. Point is, I'd love to have the option to do this. It would be of great benefit to my listening habits, and even if it wouldn't benefit everyone as much as me, I can't see how it would detract from anyone's experience. Get on it this time, Spotify! Now more than ever it's time to get this implemented.

Yes I like this idea. You should be able to lock songs together: For example

Song 2 is outro for Song 1 but they are separate tracks on album. But what I want is to play this songs ALWAYS together (song1 first then song2) even when press any of them, or I have playlist on shuffle. This should work for 2+ songs too, Song1 is intro for song 2 and song 3 is outro for song 2. So I want to play Song1+Song2+Song3 always together in this order. I think its easy to implement and it will be really nice to have.

Thanks so much for your support these 3 months.  From the looks of it were on-track to top 100 kudos before the anniversary next November, and *maybe* the idea will get moved into development.  It sure would not hurt for it to go viral and get noticed, so if you know anyone who's on Spotify, please *beg* them to like this idea and help it get escape velocity.

Classical music pieces are basically not shuffle-able without this feature, really getting tired of having to manually choose what pieces I'd like to listen to. Just because classical music listeners are a small % of spotify's audience doesn't mean that they would be the only one benefitting from this feature, anyone who wants to hear more than one song in order on shuffle would find value in this. This would also be a HUGE differentiator from other streaming music apps as no one else offers this feature.

Hopefully this time around we can get it done.  It's been nearly four years since the original idea.  This is my number one feature that I'm hoping will happen someday soon.  Come on!

It would be great if this could happen.  For songs that I own, I've had to resort to making a mega-mix mp3 of the desired tracks to ensure they play together (see Led Zeppelin Heartbreaker-Living Loving Maid) and import into Spotify.  For those that I don't own, I'm out of luck.   This would be a gamechanger.

I just thought I'd pop my head in and say hi; I originally put forward the idea for linked tracks and, as I sit here listening to 'Thick as a Brick (Part 2)' by Jethro Tull, I thought to myself that I'd rather have heard the first part before it...

So, many thanks to Bvacaliuc for putting forward the idea again, hopefully this time we'll get it adopted! 🙂