[Playlists] See which playlists a song has already been added to

Sometimes I think of or hear a song and I want to add it to a certain playlist but I’m not sure if it’s already in there, or I just want to know what playlists it’s in. It would be nice to to have a feature where you can check which playlists of yours a song has been added to. I know that you there’s a notification if it’s a duplicate, but it would be more convenient if the song is in multiple playlists to just see all of them at once rather than getting that notification one by one for all of them, if that make sense.

Edit: someone in the comments suggested having checkmarks next to the playlist names in the "Add to playlist" drop-down and that would be perfect!

Well, you're in luck then! You can actually do exactly that. On Desktop App there's the option to "search within playlist". 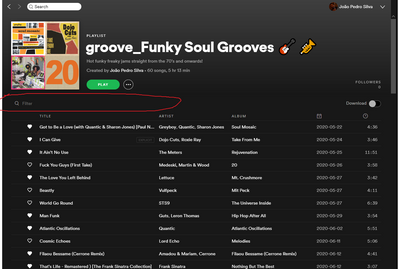 Although it's a very distinct function from what we are asking on this topic, and one that does not meet that need. 🙂
Hope that helps tho!

Hi, thanks for the suggestion, can I ask how do you find/USE the "search within playlist option" using the desktop, sorry if I am missing something obvious.

Edit.  Ah, sorry I have seen you screen shot now, so the search only works within a selected playlist.  So, if you don't know in which playlist/s the song is in it won't help?  Thanks for the help though.

ChexMex I have just tried out your Spotify Playlist Manager "Multiple Playlist Searcher" and it does just what I wanted ot to, thak you so much for sharing!!

On the desktop app (i'm using windows 10), open any playlist you've created. There is that searchbar I've highlighted on the screenshot above which says "filter" by default. Click in and now you can type anything you want to search for tracks. 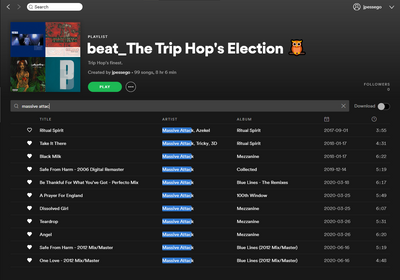 Can there be a feature similar to searching for songs within a playlist, but across all your own playlists created? This would bring so much joy to someone that creates many playlists, and when i want to listen to a particular song and I have forgotten which playlist i added it to, i have to search through every playlist I have created to find it. I feel like a general search bar for songs across all your playlists would be a great feature. Or even if you search for a song in the normal way, the playlist you created with the song in it should appear. This would be similar to when you search for a playlist name, and your own playlist appears first regardless how many followers

John1664
Regular
Hi check out this post from earlier in the thread:


I'm planning to try to create a website utilizing Spotify's API to solve this issue and hopefully do a couple of other neat things with playlists. Look out around January next year, hopefully I'll have something up and running by then.

I currently made a desktop application, Spotify Playlist Searcher under my GitHub username "MaximoM", that you can find that solves the issue if you don't want to wait. However, the UI is rather bad and it's windows only as of right now. Plus, for some odd reason or another it doesn't always give every playlist for a song. I'm hoping to fix all those issues and more when I move it all over to a website rather than a desktop application.


I have tried this and it really is good, you have to give access to your Spotify account for it to work but I confirm that I have had no issues since using it

This would be extremely helpful for when I am trying to replace songs throughout my playlists. Why would I want to do this? Because there are multiple versions of certain songs on spotify, in different albums. For example, a song is often duplicated in the regular and deluxe editions of an album, or between a single and an album (would be nice if these were tracked as the same song).

I prefer to like a track only once, and have that version of the song in all my playlists, rather than have multiple of the same song scattered throughout my playlists. This is because Spotify treats this same song as separate songs since they are from different albums (again, would be nice to track these as one item), and therefore does not warn me that the song is a duplicate and already present in a playlist. I have a lot of liked songs, and I can't keep track of all of them, so sometimes I like a duplicate version of a song and add it to the playlists it fits in. This leads to multiple of the same song in my playlists and my liked songs list.

It's easy to find if you've liked the same song twice by sorting through your liked songs list. However when I find that I have accidentally liked the same song twice, I have no idea which song I have added to which playlists. Most likely, I have added each song to different playlists, and some of my playlists likely have both versions of the song in them. If I could just see which playlists have a song in them, I could remove the duplicate song and make sure that all of my playlists have the correct version, and only one version, of that song in them

ChexMex
Newbie
Hey there! Until Spotify decides to implement this, you can use a site I
built, www.spotifyplaylistmanager.net, to solve this exact issue. Hopefully
that helps you out!

Perhaps a simple way to implement this would be a small icon at the side of the song - just like the heart for favorites.

By clicking on this icon, a list of playlists where this song is already in would appear.

This would be really helpful! I can't believe how many times I have selected the same playlist only to click the "SKIP DUPLICATE" button.