watchOS 5 should allow Spotify to develop an app that allows offline listening and streaming via cellular data.

Vote here to show your support for this development!

We wanted to post an update as a lot of you have added your votes to this idea.

We’re always working on improving the Spotify experience across platforms, but we’re afraid we don’t have any further information to share at the moment.

We typically don't announce integrations with third parties in advance. The best place to keep an eye on is on the Spotify Newsroom blog for updates about any partnerships.

Thanks for sharing this article. This kind of ties it all together.

Good article and it does soften my stance a little.

But I'm wondering if we're making assumptions in sympathy of Spotify? Knowing full well about Spotify's negative stance toward Apple, if this were the case then surely they would have publicized this front and centre? They could have even run a smear campaign showing that Apple supports streaming of unprotected content.

At the very least, why couldn't Spotify say something about it? At least that would have put us on their side.

Instead, the current perception of Spotify is a muddled one of greed and withholding features from customers in order to get back at their stronger and richer competitor.

Either way, all I've gathered from this is that Spotify has now officially run out of excuses once Watch OS 7 rolls through, which will be in a few months. If Spotify doesn't offer offline downloads and streaming by the end of 2020 then we know very well where they stand on the matter.

100% still Spotify's fault. They could help the situation by informing their users of this situation, and providing a roadmap. If the issue were identified as an Apple one, then Apple's customers (including myself) could direct their ire at them instead of Spotify.

Poor communication and community engagement is the fault squarely of Spotify.

Sad to say, because I've been enjoying Spotify for a long time, but that's a feature I'm really looking forward to...

I'll wait a couple more months to see what gives after apple launches watchOS 7, but if nothing changes I'll end up migrating to Apple Music, which has the feature.

Whoever the fault is, doesn't matter much from my customer point of view...

Why in 2020 I cannot listen offline on apple watch, will unsubscribe.

Common Spotify, don't let us down.

It is possible, make us Watch-Users happy, we don't wanna carry our IPhones all the time.

Please add Apple Watch functionality. Regretfully had to switch from Premium to Apple Music a few months ago. Premium, in fact Free Spotify, is far superior to Apple Music but I stick with it purely for watch support.

Commenting on here will make little difference. The only way to make an impact is like this, my Premium sub was cancelled today. 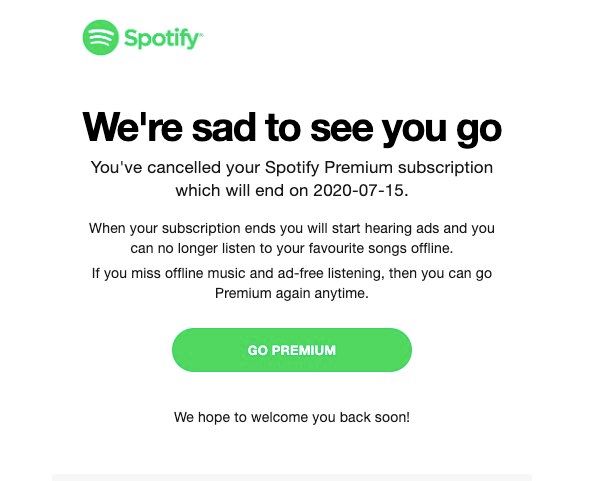