A New Year Resolution can be broadly understood as a promise one makes to themselves to start improving their life as the new year starts.

In order to fulfill this promise one will, for example, focus on continuing with certain good practices or maybe commit to initiating new ones. Just like this postcard from 1915 says. 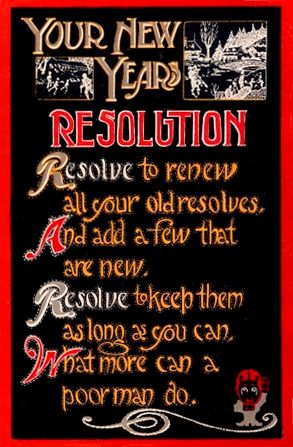 When it comes to New Year Resolutions, it's definitely worth considering how music can lead someone to reflect on their life in the pursuit of self-improvement.

It’s also true that music can help not only reflect, but also act in the context of a New Year Resolution and of one's promise to make (their) life better. Music can inspire one to act.

These days, I ended up rediscovering a song that I used to listen to a lot, but that I also somehow forgot about during the past years.

As I listened to it again after so long, it immediately inspired me to stay focused on acting sensibly as well as with a “beyond-the-limits” sense of vision in order to make (my) life better.

“Feet on the ground, head in the sky”, like the songs says 🙂

If you're wondering where to find out what this song is ...

Now, I have a challenge for you.

To accept it and pass it, you must reply to this post and include the following:

That’s all for this post. Happy New (Inspired) Year, everyone.

MarioModerator
Help others find this answer and click "Accept as Solution".
If you appreciate my answer, maybe give me a Like.
"There's more to living than only surviving." - Dexter Holland
Labels:
Reply
8 Likes
3 Replies
Highlighted

Here’s my top pick for the track that is inspiring me to make my life better this year:

Besides the wonderful dream-toned otherworldliness of the guitar melodies on this track, which for me are conducive to a relaxed state of mind that I oftentimes seek when feeling stressed out, “Lazy Boy and the Temple of Wonders” by Weedpecker also features an inspiring spoken word excerpt by my favorite philosopher, Alan Watts:

“So let’s go on then, into our visualization; our imagination. Use your imagination for all it’s worth to think yourself into the fact that this whole sense of importance of vitality, of aliveness, of being, is simply a sudden experience which was nothing before it started, and will be nothing after it’s over. That is the simplest possible thing you can believe in. It requires no intellectual effort. Nothing. Supposing that’s the way it is.”

Hearing this Alan Watts excerpt every time I play this great psychedelic rock song really puts life into perspective for me, reminding me that existence is but a fleeting moment in the grand scheme of things. In doing, this song motivates me live more purposefully and act with compassion towards others as best I can.

writie
Roadie
At the risk of sounding flippant, I'd say Roxy music's "Love is the Drug": a call to get out and dance more.
In reality, it's a pretty healthy thing to do for the mind and the spirit:
https://open.spotify.com/track/3wtMkvedoWMQ3XTKv7tqcZ?si=l_mMsXaXS6-9yu7b0S6sPA
Reply
2 Likes
Highlighted

Thanks for posting this, @Mario - I didn't think I had much to say on this, but apparently I underestimated myself 😛

As with most music which truly inspires, it's hard to pin-point what it is about a particular song which makes you feel a certain way, let alone inspire you to change for the better: I think inspiration - at least for me - tends to bypass the brain and goes straight for the heart. And while it might not express itself in a concrete resolution to strive for better, when at its best, music can soundtrack important moments in your life in a way which makes you feel understood and thus lightens the burden of whatever you might be carrying in those moments.

To go back to the question - while I'm not able to pick out any one song in particular, I can identify a characteristic shared among a group of songwriters who I'm listening to which I admire and which I'd like to emulate. Broadly put, this is the ability to serve others through one's work. Contemporary pop songwriters are becoming increasingly open about themselves in their music, even to the point of brutal sincerity. This way of sharing which bares all and spares no details seems to resonate especially with younger generations. Examples of such artists include Lauv, Maggie Rogers, Alec Benjamin, Billie Eilish, Rex Orange County, Sasha Sloan, Chelsea Cutler, The 1975, to name but a few.

I have at times been skeptical and wondered whether all this is done in the name of appealing to the mass market of the 'broken' youth. However, similarly to how people take what one reads in someone's autobiography as being true (at least as far as the author is concerned), I believe that songwriters who choose to open up to their audience through their music also deserve the same treatment: that is, that we accept that what is written on the page and subsequently performed in front of crowds comes from a genuine place. We should also allow for the fact that, at the end of the day, music is an artistic medium, and as such has to be flexible to accommodate for any deviation from the truth that it is attempting to convey.

I've personally gone from adulating said songwriters to ridiculing and rejecting them altogether. However, having experienced both extremes, I've more-or-less settled for a more measured middle-way and accepted their music for what it is: a wildly subjective, often naive and severely misguided, but ultimately sincere attempt at a snapshot of one's (troubled/frail) state of mind which represent a significant moment or period of one's life. And, going back to the initial premise that this is ultimately of service to its audience, I can attest to its ability to positively influence and, in the process, I've had to check myself and learn to accept a priori that people's intentions are fundamentally good.

To redeem myself for an unduly long response to a seemingly simple question, here's a track whose title encapsulates the nature of such songs.

I do happen to also have an entire playlist with songs from all the artists who I believe represent this movement of bleeding-heart-on-sleeve songwriting. As the name suggests, it's dark, but hopefully it gives people a better idea of what I'm banging on about: