Which albums do you listen to the most?

I usually just shuffle all my music and I don't spend much time listening to one album completely, but these are the ones I listen to the most:

The Truth About Love by P!nk that was released in 2012, it's still one of my favorites:

AM by Arctic Monkeys:

And what are your favorite albums?

BruneliciaRock Star 11
Help others find this answer and click "Accept as Solution".
If you appreciate my answer, maybe give me a Like.
Note: I'm not a Spotify employee.
Reply
1 Like 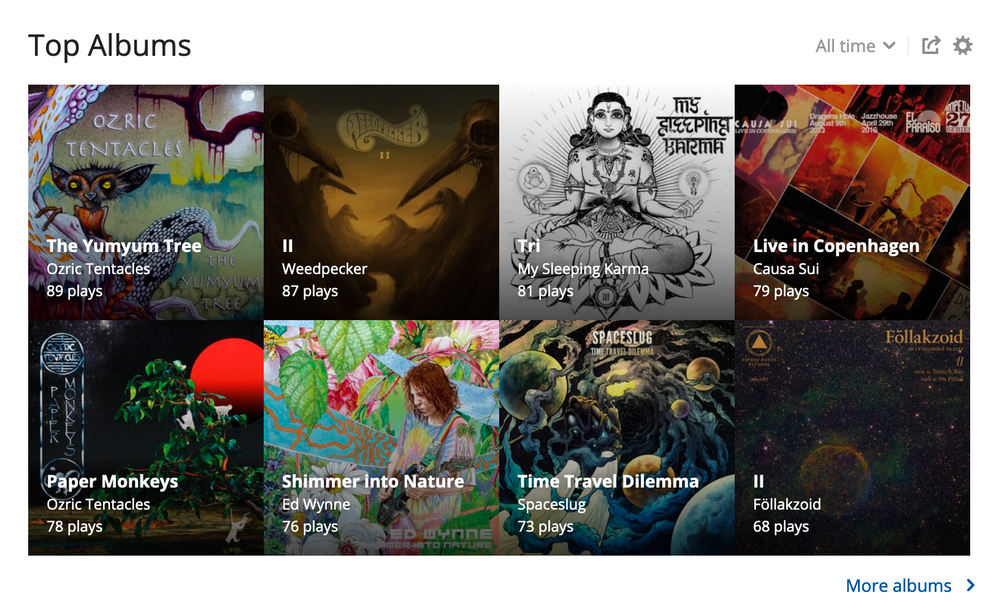 Here are my current most listened-to albums according to Last.fm

I do listen to full albums sometimes. Get tired of the disjointedness of my playlists, go to an album I love a lot and put it to play. 🙂

This one is a new Amon Tobin project with a lot of inspiration and references to psyche/punk rock and has tons of catchy (programmatic) riffs. I love that release and I'm currently rather impatiently waiting for the vinyl...
spotify:album:3QyY5dG3aX4V97gBAdgCIC:small

The new Datach'i album is beautiful, it really is..
spotify:album:32K9xoRdX83jCrTNDYgrHK:small

The new Amon Tobin album. Obviously, I guess, but man I find it enchanting. I did describe "Pale Forms Run By" as a song that caresses my naked soul in another thread. The fact it's completely beatless (strong opposite to previous full-length studio albums) just adds to it imo.

1984 by Alix Perez is such a solid release. Lots of great tunes in that one, although I have to mention that "Suffer In Silence" is my favourite song.
spotify:album:2fzARPEkcMwRoYqoSZhcsc:small

Psychic by Darkside. It is a marvellous album and while I usually listen to "Metatron" (the most seductive song I can think of) or "Heart", hitting play on the whole album is rewarding with both awesome transitions as well as beautiful tunes.

This. I've listened to this one over a 100 times. :')
This is the first Amon Tobin record I got my hands on back in 2015 and I played that one to bits. Admiration and love to both crazy drops and that amazing sound design...
spotify:album:6JiPQzrQs9VTk0cRW9kyS2:small

There is a lot of albums I love to go back to every now and then, the above are just notable ones. 🙂

SebastyRock Star 16
Help others find this answer and click "Accept as Solution".
If you appreciate my answer, maybe give me a Like.
Note: I'm not a Spotify employee.
Reply
2 Likes

I could go on, but I'll leave it at this.

What I listen to the most/Favorite Album:

I should just make a playlist with a song or two, each, from my favorite albums. That would be interesting, for me to cruise to.

There's albums I go back to for certain moods. My nickname for them is "comfort albums"