I'm back again with some very exciting news (and a smahing headache... umfh). 🙂

Amon Tobin has announced a second album this year, called Long Stories! It will be out in October 25th.

A little bit on what this album is about by the man himself:

long stories and fear in a handful of dust were made in parallel. fear is like a stretched line with extreme softness at one end and pointed angles at the other. stories pushes in through the center and is mainly concerned with balance. so harmony and melody basically.

a good portion of the record was made with just one instrument, the ugly misshapen gray plastic omnichord that somehow only makes sounds that sound like magic. these get processed through a slew of creamy analogue machines. so it's like magic folded into chocolate. like something margot robbie might eat.

The fun thing is that the album art for this one was actually included hidden in the vinyl record sleeve of Fear in a Handful of Dust. I... should have seen that coming? :'D

Now, with that announcement he released a single this Friday called "One Shy Morning".
My first impression of it was "Soundtrack of something utterly beautiful". I adore the melody. The percussion has detail that capture me.
I mean, holy god how can something be this beautiful?!

Amon also announced something for fans, called Nomark Club. For a one-time entrance fee the fans can get every release dropped til 26 Sept 2020 through Bandcamp.
I... obviously managed to join. How could I not? 🙂

There is more to come very soon... and I'll return again once I can talk about that!

I want to show you a video of someone playing an Omnichord. Amon was right, it is a fairly bad-looking device, but with sounds that drip of magic and sweet childhood nostalgy.

Considering that was used for the major part of Long Stories.. I fear it might end me with sheer beauty. :'D I can't wait!

Another single off Long Stories has been released! It's called "Full Panther" and is a lovely tune.

Shimmery vibrating haunting soundscapes that slowly wrap the listener as they expand, nostalgic-sounding chord progressions (of the ugly gray Omnichord) and that almost audible percussion that lifts you up from the velvety depths.

Have a lovely day and I'll speak again soon 🙂

The day has arrived and Long Stories is finally available for listening!

Darken your room, prepare a delicious cup of coffee, tea, cognac or something else of your preference, sit back and enjoy:

If you wish to read about the album, scroll a little upwards by about 2 posts. 🙂

Solid continuation from 'Orange' with war-drum beats and lots and lots of grimy menacing sounds!

Today, somewhat silently and using a moonlit Velvet Owl sighting as a sort of a promo: 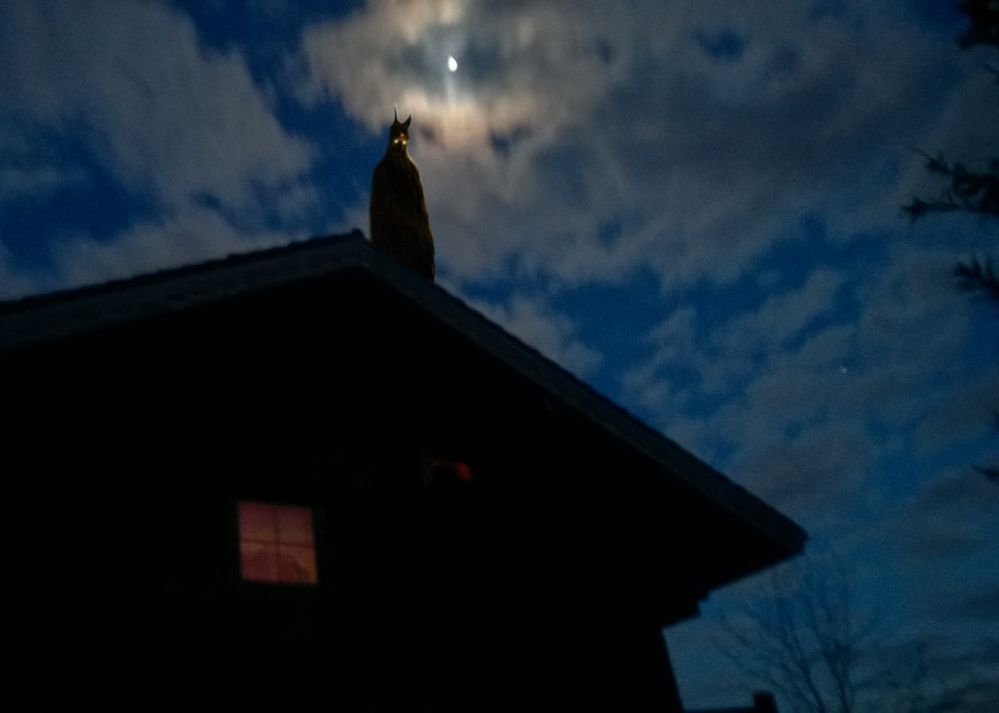 (they remind me of the sounds electric engines do when the voltage isn't quite right) :')

A little storytime post: how Amon began with making music.

Amon's family didn't have any musical background and he was coached into chemistry instead of music at school because no-one took that inkling of his seriously. But his interest remained. He grew up in the 80s when cassettes were most available. He and his friends grew fond of hiphop as they got handed cassettes of mostly hiphop. They were all little b-boys who had nothing to do with anything, but still attached themselves to this music. He got really into cassettes.

One summer he decided to get a cassette deck (to his memory it was a Toshiba twin cassette deck called MiniSystem), collecting money for it by washing cars.

And so he got it (the Holy Grail!). He started making tape edits on Top40 track lists recorded off radio stations, make his own version of it by removing parts he disliked and then distribute it at school.

He was about 12 on this photo: 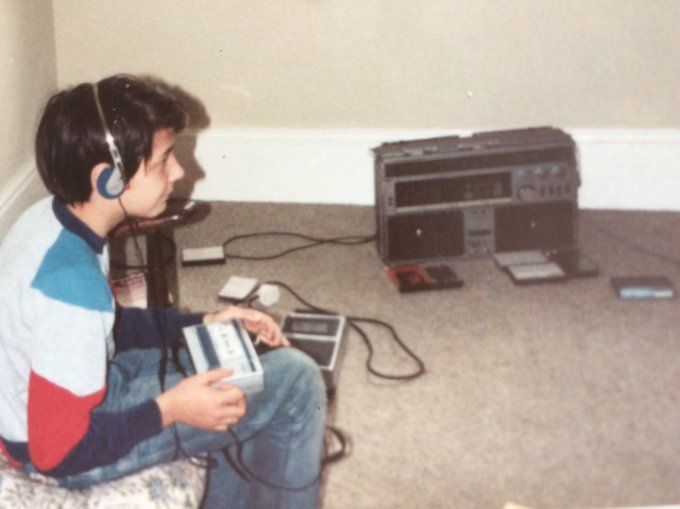 As he grew more involved, he started modifying tracks by removing parts he disliked, editing other parts to his liking and changing order or parts. He would also make use of his father's english pronounciation learning cassettes (his dad was an English teacher), borrowing slices off them and incorporating these in his work.

Once finished, he sold the reworked songs to his schoolmates.

He grew very deft using the deck making these edits, before samplers he got into rearranging music.  Once he found out about samplers, it felt like an extension to the cassette deck, this time he could start making proper edits.

At some point later Amon's main interest was putting together samples from various sources to see how it goes. He really loved the fact he could use music he was interested in and make something relevant to himself out of them without having to be culturally linked to anything. He wanted to be a bluesman at some point before figuring out it would be ridiculous for him.

He had a friend to whom Amon sometimes played his works and he suggested sending some demos to some labels. They bought some music(?) magazine, at the backside of which were ads for various music labels. The one that accepted him was a little independent label called 9bar that asked him to come over and record something.

That was when his first full-length release was born - Adventures in Foam. Constructed by his curosity on finding samples from various sources and carefully reorganising them to create something of his own.

You can listen to that release right here:

Tiny fun fact to those willing to search - Amon's boxset contains a few tracks labelled as teenage experiments. They are the 7 little tracks sitting at the end of 4th CD of the boxset.

i forgot about this thread. 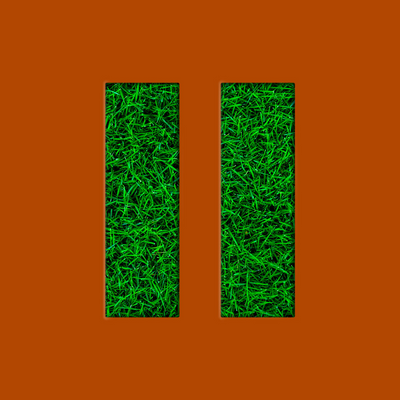 Listen to the album here:

With the vocal samples reminding me of this extremely demanding pet pigeon my mother has. 😀

There is a new mysterious project coming up:

First featured on the Only Child Tyrant project, this project is soon going to see a release (or a few) of its own.

Other news: Amon Tobin talked on an episode of the Vinyl Guide which you can listen to here:

He chatted on topics such as his label Nomark, working with Bandcamp on releasing vinyl and his journey of using samples in his early days of making music, among other things.

A 'new album release on Spotify, but it's actually a 2017 release' post!

It's a score made for the Syndey Opera House event called Vivid Live, where imagery and visual spectacles accompanied by similarly stunning audio get projected on the building's Sails.

This one was called "Audio Creatures" and the imagery was created by Ash Bollard.
It looked like this: 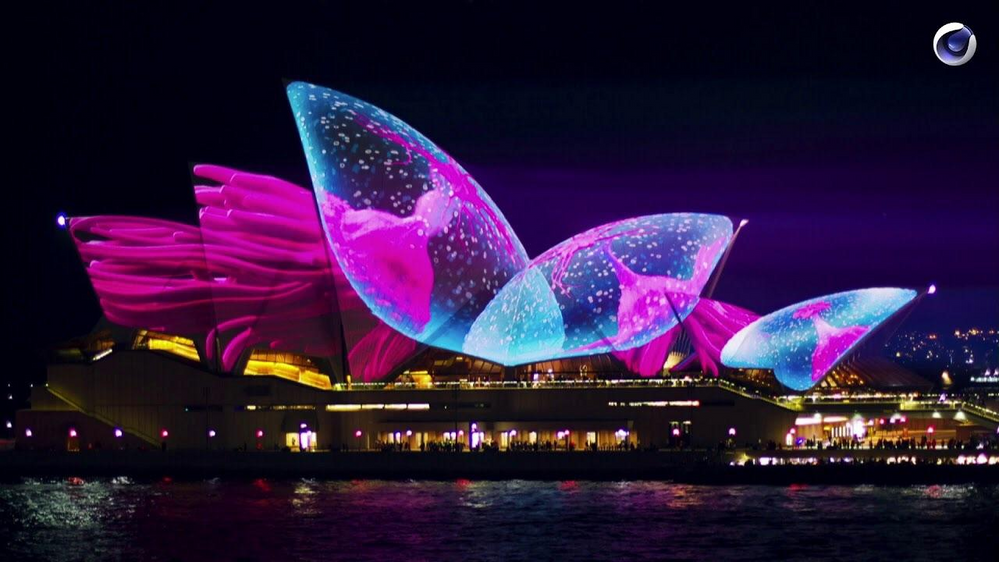 Amon created the entire score with his Buchla.

I would describe it as.. a whole lot of sound design, submerged, everything you see emits sound.

very small birds say Figueroa might start emerging in July. I am excited!!!!

SebastyRock Star 16
Help others find this answer and click "Accept as Solution".
If you appreciate my answer, maybe give me a Like.
Note: I'm not a Spotify employee.
Reply
0 Likes
SUGGESTED POSTS