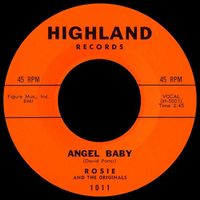 Rosie Hamlin, lead singer of Rosie & the Originals, passed away in her sleep Thursday. Rosie & the Originals recorded one of the greatest, most distinctive hits of the early '60s — "Angel Baby." The song was a favorite of John Lennon, Linda Ronstadt and members of Led Zeppelin (I'm guessing Robert Plant, who loves early '60s female R&B singers). Not only does Hamlin give a gorgeous vocal performance, the record starts with an unforgettable guitar lick that sounds like it's coming in from another dimension.

Spotify has "Angel Baby" and five other tracks. But if you want to do the digging, check out "Give Me Love," the B-side of "Angel Baby" and another Lennon favorite, as well as their version of "You're No Good," better known as a Ronstadt hit. If you're into oldies, you won't be disappointed.

Thank you for introducing me to Rosie Hamlin. I have never heard of her before. The song is a very nice 12/8-ballad. The guitar-lick in the beginning is interesting indeed. Hard to decide, if the "another dimension"-vibrato was played with the Whammy bar (Fender Strat maybe) or with a Vibrato-effect. Rosie had not one follower on Spotify, so I followed her as a tribute.