Sco-Mule brings their A-Game to The Fox in Oakland, CA (a concert review)

Sco-Mule brings their A-Game to The Fox in Oakland, CA (a concert review)

Ok, I've decided to step a little further out of my protective shell and start writing concert reviews for others to see. I started an internal blog at work where I've been sharing my concert experiences for the past two years. I've decided to dive a little deeper into the pool and share these thoughts more publicy. Here we go...

Last Friday, my son (Charlie) and I returned to The Fox Theater in Oakland to see Gov’t Mule. I’m a huge Gov’t Mule fan, and my son, who plays guitar and bass, shares my addiction. Warren Haynes (lead guitarist and vocalist) is one of my musical heroes.

I’ve seen Gov’t Mule live now about 15 times (including a 4-night concert in Jamaica). No two shows are ever the same, and you never know what they’ll play or who might join them on stage. (Guests I’ve seen them play with include Grace Potter, Davy Knowles, Hook Herrera, Ron Holloway, Anders Osbourne, Robbie Krieger, Dave Schools, Phil Lesh, Bob Weir, and many more.

But this short winter tour was going to be a little different. Touted as the Sco-Mule tour, this time Gov’t Mule was joined by legendary jazz guitarist John Scofield. A brilliant improvisational jazz guitarist who has worked with Miles Davis and Pat Metheny, Scofield is well versed in jazz fusion, funk, blues, soul, and rock. What better partnership for Mule’s southern blues-rock jamming style.

However, this partnership/tour was a long-time coming. Way back in 1999 (yeah I said way back), John Scofield played a few shows with the original Gov’t Mule lineup. These recordings were supposed to be released, but the death of original bassist Allen Woody put that project on the back burner, only to be forgotten for over a decade. Last month, Gov’t Mule released these recordings in the 2-disc collection titled “Sco-Mule”. Listen here:

And this is the tour celebrating this release and long-time partnership. So…on with the show...

The show started off with a high note for me with a cover of the The Staple Singers soulful "Hammer and Nails", a song I have numerous copies of in my bootleg collection but had never heard live. Warren’s voice echoed through The Fox Theater and then his slide guitar filled in every corner of the room. Next up was the monstrous baseline of "Game Face", which seamlessly bled its solo in “Mountain Jam." The first set continued with several old-school Mule tracks, including "Time to Confess" and "Banks of the Deep End."

Then, after a nice “Ain’t No Sunshine” intro, the band broke in to “Blind Man in the Dark”, during which John Scofield took the stage during the extended solo for the first time. Scofield has a jazzier and overall brighter tone than Warren, and the two played off each other wonderfully. Next up was a 16-minute version of the Allman Brothers Band’s “Instrumental Illness”, in which Warren and John traded solos, overlapping each other, going in different directions, and then coming back full center. A real highlight of the show for me. 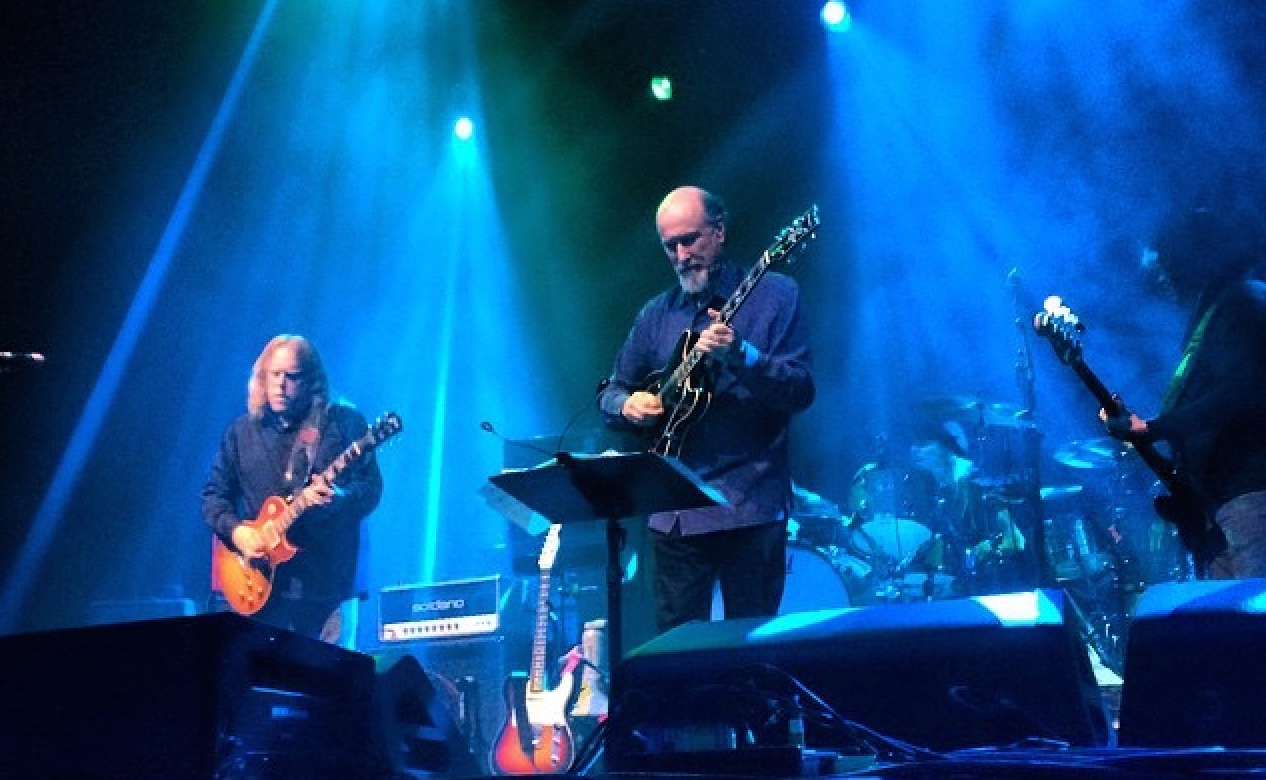 The 2-hour first set concluded with stretched out versions of two instrumentals “Birth of the Mule” and “James Brown’s “Doing it to Death.”

Set 2 started off strong with the fiery “Mule” and then into the ballad "Beautifully Broken" with Tom Petty’s “Breakdown” sandwiched inside. Set 2 ended with a normal version of Traffic’s “Low Spark on High Heeled Boys” and then a 15-minute version another ABB classic “Dreams”, in which Warren and John traded solos again. This version had a completely different tone that Warren’s versions with Derek Trucks with ABB. 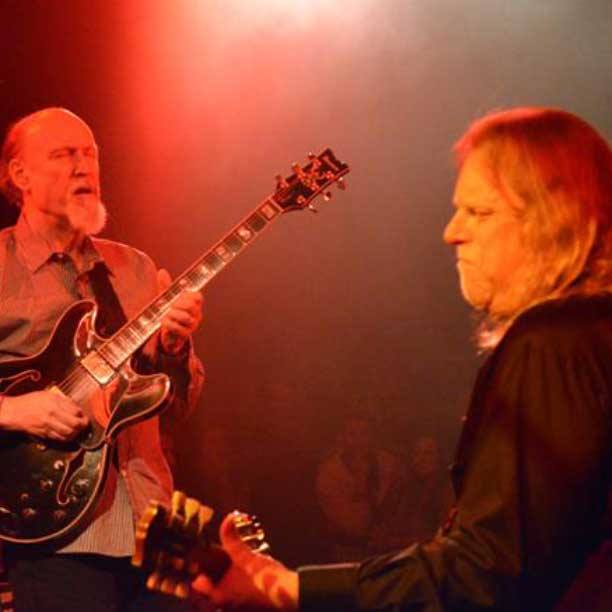 The show closed out with a personal favorite of mine, “Get Behind the Mule”, which is a droning march fused with some nice audience singing. Toward the end of the 12-minute closing number, Warren reached back for a megaphone and sang through it the rest of the evening.

This show was a real partnership of Haynes and Scofield, each sharing the spotlight but not trying to outdo each other. And it was wonderful to hear several songs I'd heard live before reintepreted by Scofield.

And, if you're so inclined, here's a link to a bootleg of the show. Mule fully supports audience tapings of their shows.

Posters to commemorate the evening: 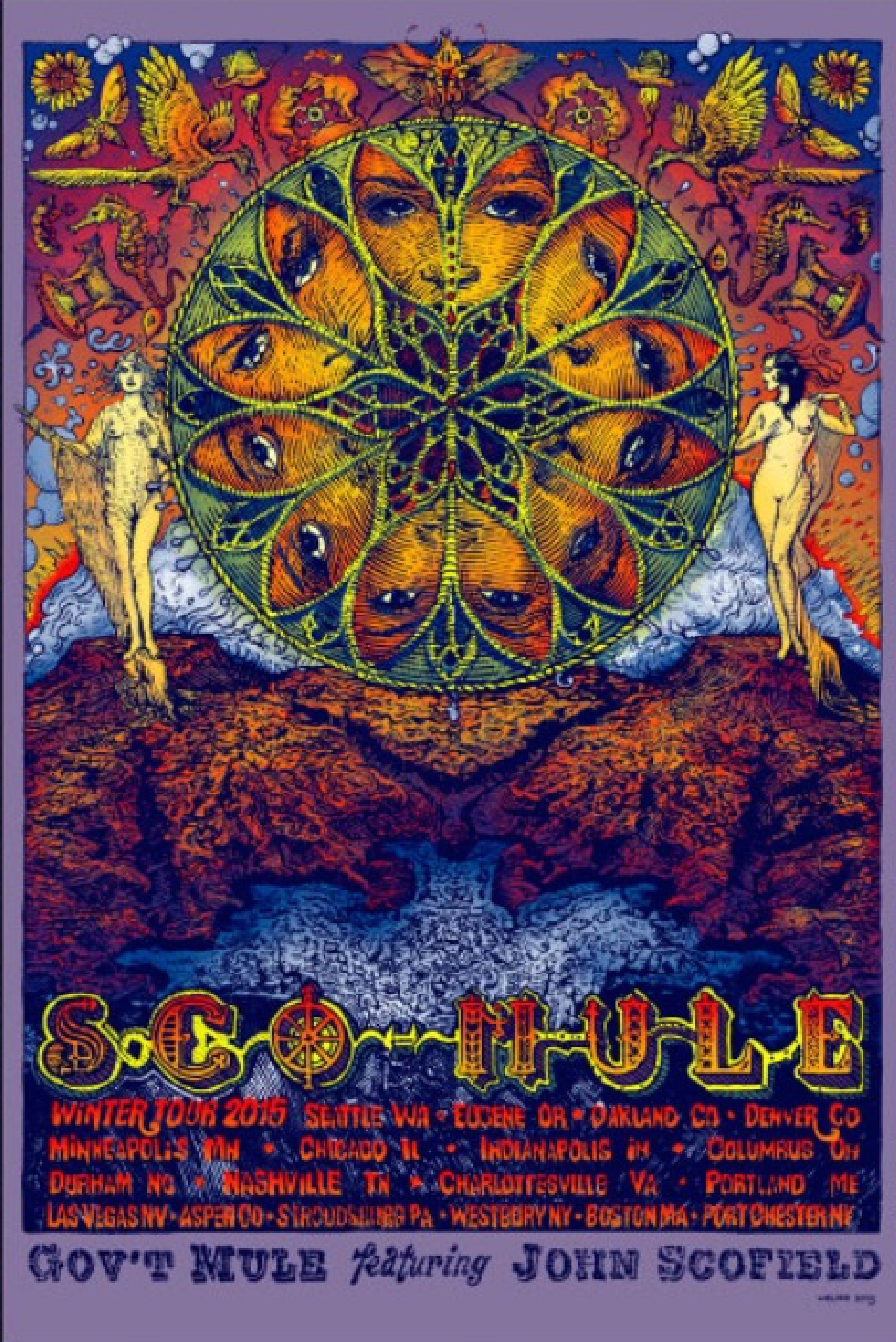 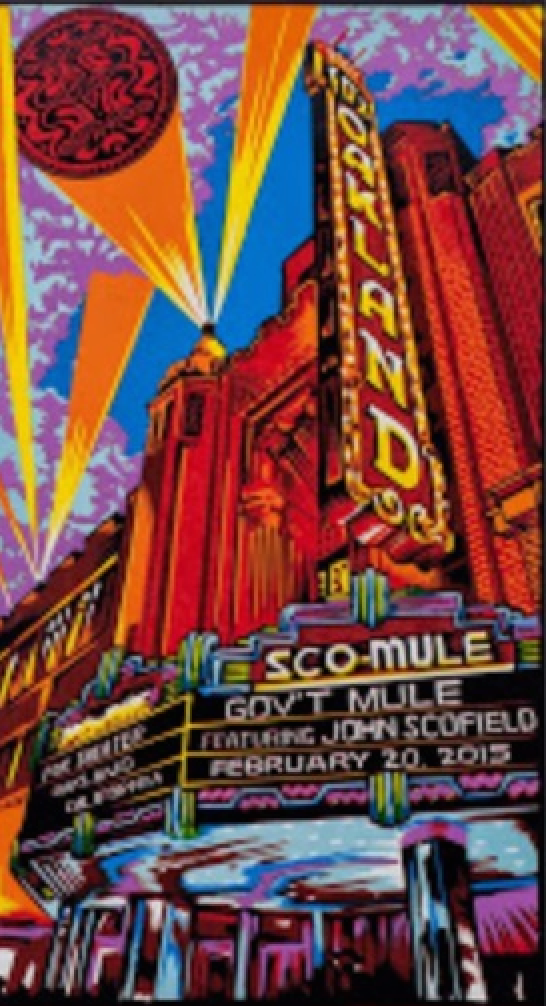