@crematedman I do my best 🙂 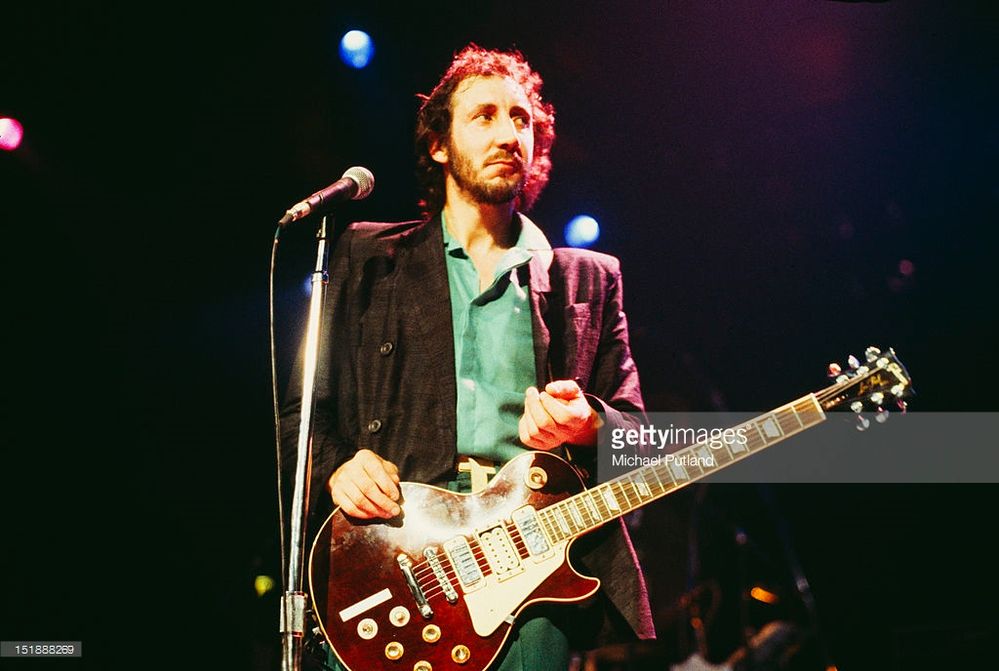 Pete Townshend, the living windmill, was never known for handling his guitars with much care. Unlike most other players in this thread he is also not known for extensive solo-noodling. Pete always serves the song and focuses on rhythm-guitar leaving much space for the real soloists of the original The Who line-up, Keith Moon and John Entwhistle.

But back to the topic: During the 70s Pete used Gibson Les Paul Deluxe models on stage and sometimes in the studio. Most photos of this period show him with this model, but it looks quite different from a standard Les Paul Deluxe. Have I already told you, that Pete don't care so much about his instruments?  All of his Les Pauls were heavily modified. If you are collecting guitars or other instruments you avoid to modify instruments, because modifying guitars is like cancelling stamps. He did the following

- added a third Pick-up in the middle

- modified the wiring and switching 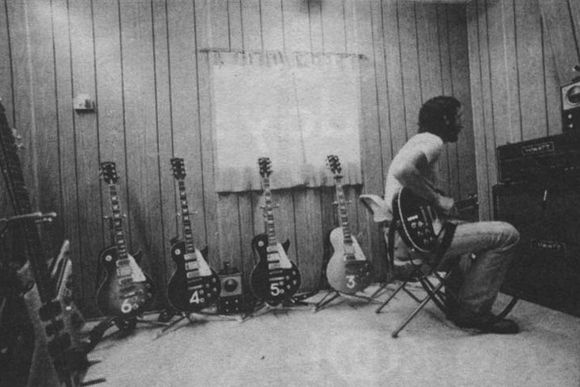 Actually Gibson offers a Pete Townshend model derived from his 76 Goldtop Gibson Les Paul Deluxe, which he has smashed in 1976 at Boston garden.

I choose a Live-track from the 70s for this post 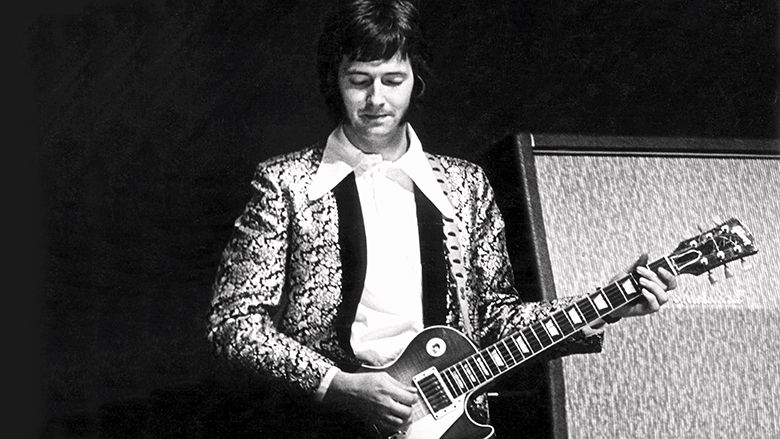 Maybe it had been better to publish this post right after the initial post about Les Paul, but somehow I forgot it. Eric Clapton, nowadays known as a Strat-player, has also used a Gibson Les Paul back in the 60s and did not less than to create a highly influential standard for the Les Paul tone. When he came back to England in 1966 he joined John Mayall and the Bluesbreakers for the second time and purchased a Gibson Les Paul Standard, probably built in 1959 or 1960. He plugged it into a JTM45 Marshall-amp with 4x12 Box. turned all knobs on 10, rolled back the tone-control of the guitar and ... ka-ching ... there was the famous "woman-tone". This sound introduced the Les Paul guitar to the world of Rock.

The Les Paul, which Clapton used for "John Mayall Bluesbreakers with Eric Clapton" would be the holy grail for every player and collector, but unfortunately the iconic instrument was stolen at the first rehearsals of Clapton's new supergroup "Cream". Afterwards generations of guitar-players decorated the story about this guitar. It is called the "Beano" Les Paul. Of course Gibson build a replica in 2010:

In 2016 Joe Bonamassa, master of the Blues and collector of vintage guitars, announced, that he knew, where the "Beano" is stored and he is sure, that it's a 1959 and not 1960, so Gibson modeled his replica after the wrong year.

John McLaughlin, the elder statesman of Jazz and Fusion guitar, used a 1958 Gibson Les Paul Custom with bigsby on the first album of The Mahavishnu Orchestra called "The inner mounting flame" from 1971. This album was highly influential for the further development of Jazz-Rock and the tone, which he achieved on this album, the combination of the Les Paul and a Marshall amplifier, was often named as one of the best electric guitar tones ever recorded. It's raw and wild. John's flashy lead-lines, the use of odd measures and poly-rhythms were groundbreaking. The Mahavishnu orchestra created a perfect blend of Rock-power and Jazz-Sophistication. 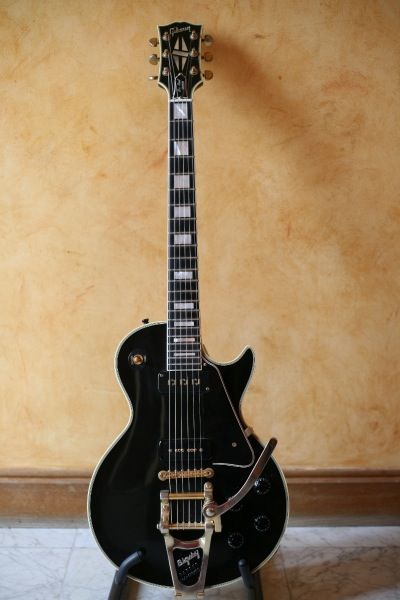 I don't know, what happened to the original guitar of John, but nowadays he has replaced it with a Gibson Reissue model.

@heartscore i'm loving the depth and quality of this thread! 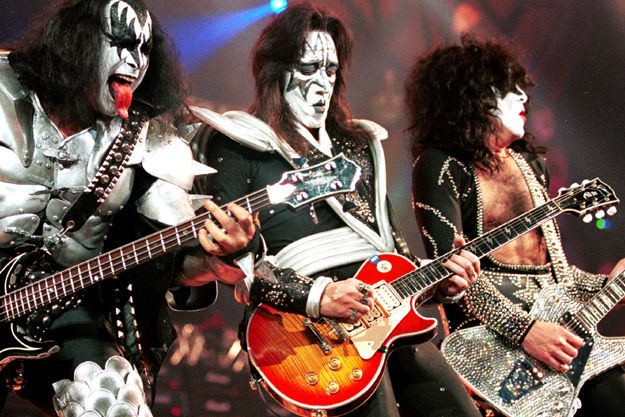 Ace Frehley is known as the guitar-player and founding member of "Kiss". His style is influenced by the three gods of the British Invasion: Eric Clapton, Jeff Beck and Jimmy Page. He also uses older Rock'n Roll style licks and phrases as good old Chuck Berry. So though the band "Kiss" looks like a bunch of spacemen from Mars the guitar-work is very traditional and down to earth. Ace or "Space-ace" used Gibson Les Pauls throughout his career. According to acefrehleylespaul.com he used a modified 1973 Les Paul Deluxe, a 1974 Heritage Cherry Les Paul Custom  and a 1959 Gibson Les Paul (!) called "The Frehley Burst". The two latter ones are the most interesting instruments in his career. The 1974 Les Paul Custom was heavily modified by Ace Frehley. He installed a third Pickup (because he liked the look of a three Pickup-guitar, the sound was of secondary importance) and changed the hardware. The resulting guitar became his standard instrument and gave distinction to his stage performance. Gibson dedicated a signature Les Paul to him basing on this modified 1974 model.

But while he was identified on stage with this modified Les Paul, he recorded most of his classic tracks between 1977 and 1985 with a 1959 Les Paul. If you are an attentive reader of this thread you should know meanwhile, that a 1959 Les Paul is something like the holy grail. Unfortunately Ace Frehley sold this instrument in 1985 for 6000$ to a guitar-store. I want to cite again the very informative acefrehleylespaul.com where I found an impressive history and worth-development of this particular guitar: 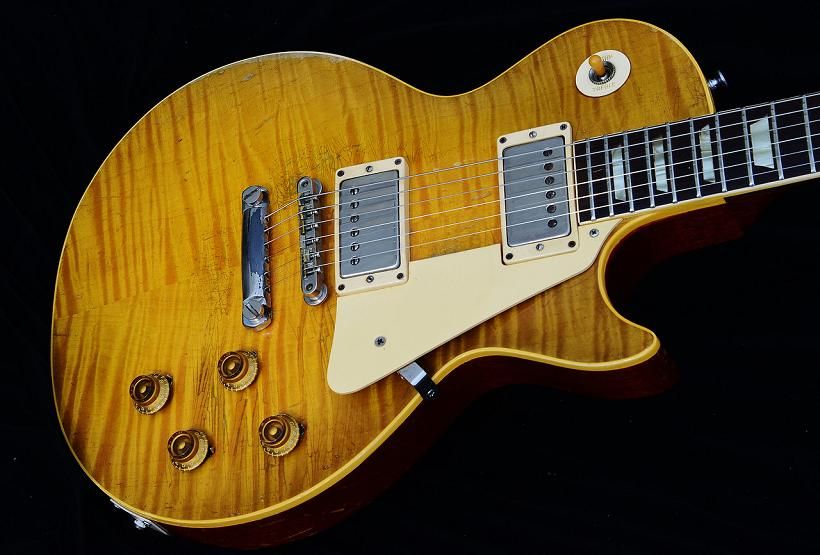 1959 Les Paul "The Frehley Burst"
I am sure Ace Frehley misses this Les Paul ...
Ace Frehley influenced many other guitar-players and often they say, that they started to play guitar because of him. Though Frehley was never known as a virtuoso many shredders are big fans of his style, for an example Marty Friedman, Paul Gilbert and Dimebag Darrell. Most influential might be his playing on "Alive"
spotify:track:1v8dUmTUsO7GVV3Xfv1Ssh
And here is a classic studio-song, probably recorded with the 1959 Les Paul
spotify:track:5MFYMGpELNHIRng8WblNCr
Reply
2 Likes
Highlighted

@crematedman Thank you, it's a solo flight so far, but I have fun and will finish it 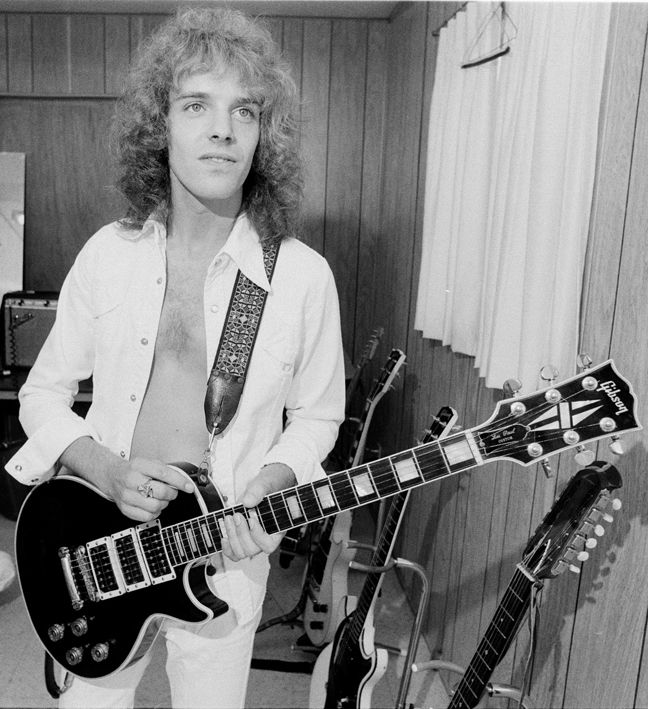 Peter Frampton, ex-member of The Herd and Humble Pie, experienced the peak of his career with the solo-album "Peter Frampton comes alive!" in 1976. He introduced the Talk-box effect and made it his trademark. Though Jeff Beck had already used it in 1974, Peter Frampton became famous with it. A Talk-box feeds the signal back to the mouth of the player, who can change the resonance of the sound with his tongue and lips. It is even possible to apply words to the sound, therefore the device got its name.

Besides the Talk-box there is also a thrilling story about Peter Frampton's guitar, a 1954 Gibson Les Paul Custom: 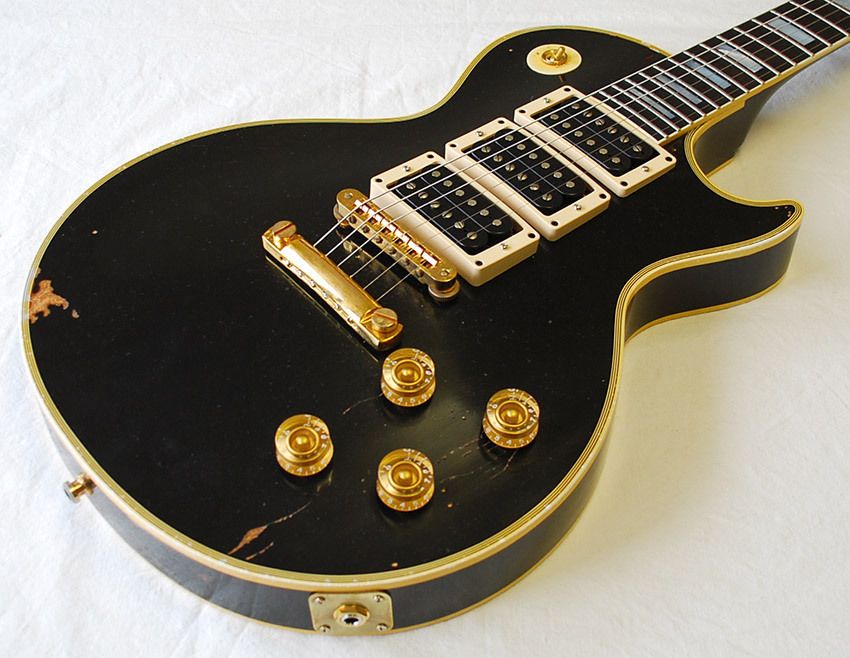 In 1970 Peter was very frustrated by his guitars until a fan had mercy and donated him the Gibson Les Paul Custom. The instrument had been modified to a three Pick-up layout by the fan. The guitar became immediately Frampton's favourite and he played it until the guitar was lost during an cargo airplane-crash in Venezuela. This happened in 1980. Frampton was sure, that he would never see the it again, but like a miracle the guitar was relocated in 2011 in dutch island Curacao. With the help of the government of Curacao and a local luthier Frampton and his beloved Les Paul were united again. Because of this story the guitar got the nickname "Phenix". This is a Happy End, isn't it?

Of course the Gibson company launched a reissue model. In the following track from "Frampton come alive!" the Talk box effect is very prominent. The second track features more blues-orientated playing on the famous Les Paul. 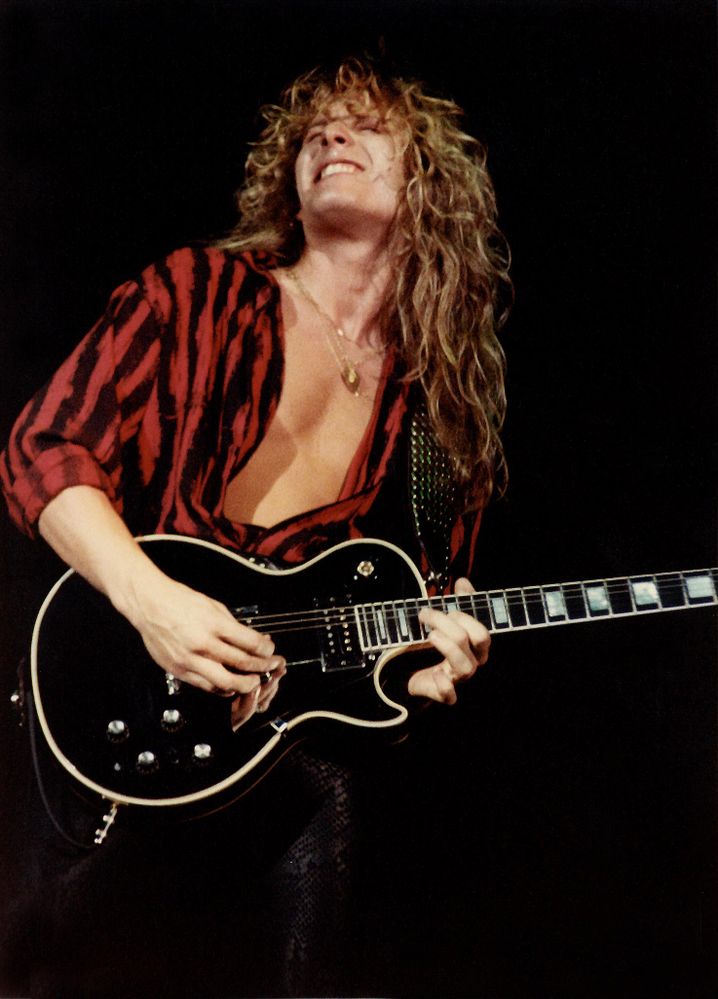 Now this thread gets more interesting, because I want to introduce some less known Les Paul-players to you:

John Sykes started his career with the Tygers Of Pan Tang, a good example of the New Wave Of British Heavy Metal (shortcut NWOBHM). Next he joined Thin Lizzy for the album "Thunder and lightning", but in my opinion the highlight of his playing can be found on the self-titled album of Whitesnake published in 1987. The immense success of this particular album can be explained by the clever blend of old-fashioned Hard-Rock with modern Metal and a very polished production. Whitesnake was often bashed as a pale copy of Led Zeppelin (Robert Plant himself called him "David Cover-version", when Coverdale "betrayed" Plant with Jimmy Page on the "Coverdale/Page"-album.) But on "1987" Whitesnake sounded like a modernised Led Zeppelin, maybe without the finesee, but with a lot of power.

However John Sykes recorded his guitar-part with a Gibson Les Paul Custom from 1978. This guitar was heavily used by him and shows many signs of wear: 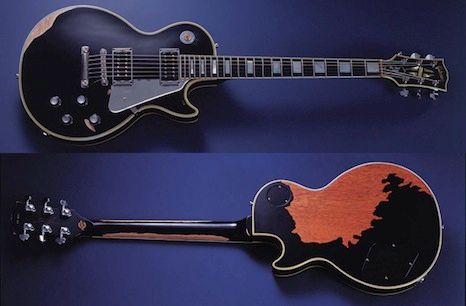 It was slightly modified with Metal-frames for the Pick-ups to achieve a unique look. Compared to this axe modern attempts to get a relic or distressed appearance seem ridiculous.  Now listen to a track with this hard-working guitar on Whitesnake's "1987": 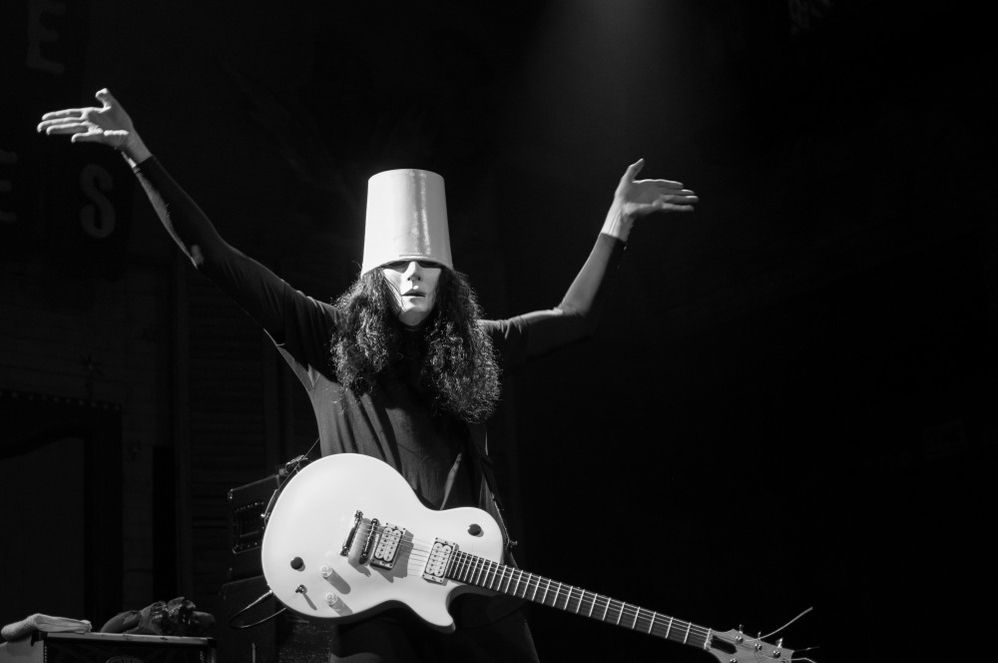 There is no doubt, that Buckethead aka Brian Patrick Carroll is a phantastic guitar-player. As one of the most respected guitar-heroes of the presence he has collaborated with other artists like Bootsy Collins, Bill Laswell, Les Claypool, he composed soundtracks for major hollywood movies and he was a member of Guns'n Roses from 2000 to 2004. But he is also a bit weird:

1. He is known for wearing a KFC-bucket and a plain white Mask ... not just on stage.

3. The mask is inspired by the classic Horror-movie "Halloween"

"Death Cube K is a separate entity that looks like a photographic negative version of Buckethead with a black chrome mask, like Darth Vader. This apparition haunts Buckethead and appears in his nightmares."

5. In 2010 Buckethead's buddy Bootsy Collins told on Twitter, that the guitar player had gone into therapy for a few months.

6. The thirteenth album, which Buckethead published in 2013 called "Pike 13" shows the artist unmasked for the first time.

Buckethead is known for his excellent technique and is one of the fastest guitar-players in the world. His style includes all elements of the modern e-guitar: Ultrafast picking, Legato and Tapping.

Surprisingly the honorable Gibson company published a Signature Model for Buckethead in 2010. It features a chambered body, a "Killswitch" (If you push this button it interrupts the sound), an extended scale of 27" and a custom white finish. 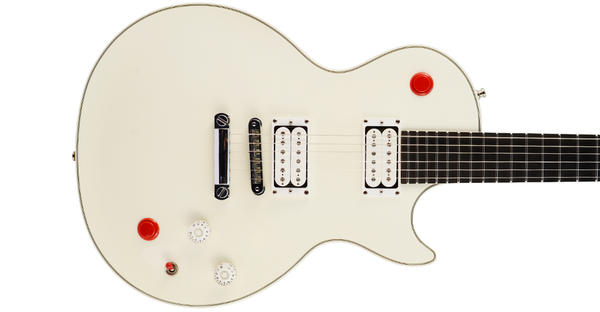