Sounds like repetition, but it’ s only partially. I’m gonna start searching for the blue 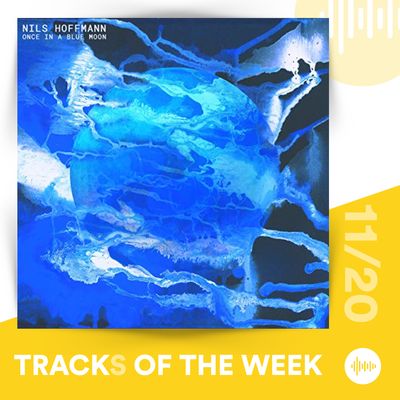 moon again. Will you join me on the quest?

Hahaha, I’m kidding. Granted: …I didn’t know the phrase and I just learned it by researching this article.  Once in a Blue Moon:

Once in a blue moon is something that happens rarely.

You can find more information on this topic here. Nils, should the title have a more profound background, I apologize. Let’s focus on the music.

Once in a Blue Moon was already the track of the week last year when it was released as a single. So why feature the same track again? The reason is 1.16699016 x 10^-8 hertz.

Much is written about the fact that the album format is dead and has been replaced by playlists. I have already expressed myself accordingly, too. But if I look at the recent releases, I have to revise this statement. If you only consider the progressive house & deep house genre, Ben Böhmer, Luttrell, Fritz Kalkbrenner and even Nils Hoffmann have released great albums recently. Probably I have forgotten a notable release as well. Something that used to be there a lot in the past and unfortunately I really miss now is an intro. Luttrell has one on Lucky Ones, Nils on Once in a Blue Moon. So, when you get right down to it: My track of the week isn’t actually Once in a Blue Moon, it’ s 1.16699016 x 10^-8 hertz AND Once in A Blue Moon together. I haven’t heard such a perfect interplay between intro and the real first track for a long time. A terrific tension, the main theme is clearly recognizable, what more could you want? I am very happy that Nils also chose the intro for the takeover. Thanks a lot Nils. And now, enjoy the music: