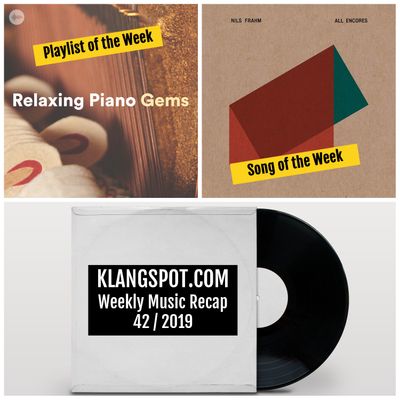 There’s a little change this week. The focus of the Weekly Music Recap will be the song of the week and automatically the playlist it is on.

Nils Frahm… the idol of so many composers & producers who seek their fortune in the wide classical, study and relaxation music genre. How many hours have I spent copying his sound until Nils, in collaboration with Native Instruments, finally released me with ‘Noire‘ for Kontakt. But I don’t want to call myself in the same breath as him. That would be blasphemy.

Nils Frahm’s music emanates a magic that is hard to resist. He has redefined piano music. It was his joy in experimenting and his sound that opened up classical music to people who would otherwise reject this genre. He made noises socially acceptable and a stylistic element. The same is the case with the song ‘To Thomas‘, which can be found on ‘All Encores‘ on the latest release. Originally the song appeared on the album ‘Encores 1‘ last year. In my opinion the song can be heard in the background to relax or very consciously. You don’t dare to breathe in order not to run the risk of missing a sound or an elementary noise.

You can hear the song on my playlist ‘Relaxing Piano Gems‘: