If you have to choose one song for the last 17 year’s which one would it be and why….

If you have read me constantly enough you already realize that I always interested in the why of the things, I love to read and know your experiences and the way you feel y thing about music and life in general, so that’s the reason that I want you to share we all of us your 2000’s song and Why….

In my case it this song that to me it’s one of the best mainly for the lyrics   (“Don't waste your time or time will waste you”), so full of truth and the guitars that almost seems to be singing, and its pure good Rock and Roll, love to play it every once in a while.

I'm going to let this Playlist with some good options for this Thread...

Wish you only the very best!!!!

JpgchiefRock Star 14
Help others find this answer and click "Accept as Solution".
If you appreciate my answer, maybe give me a Like.
Note: I'm not a Spotify employee.
Labels:
Reply
3 Likes
8 Replies

This is my genuine answer. This band were one of my first obsessions, and this track might have been my first experience of them. Released in late 2001, It's the White Stripes' best single** ever released:

(**NOTE: All White Stripes singles are the best singles, so that's a difficult one to decide on, too)

Hotel Yorba is one of my favorites but we can’t forget Seven Nation Army!!!!

This is a very difficult choice...

But both statistically (last.fm) and soul-wise that title would go to Slowly, a track by Amon Tobin.
I'm not old enough to say that oh, I listened to Amon since he first came around (I was born when he first emerged with his little vinyls). In fact it was just some years ago when Spotify's algorithms decided to let me hear an audio version of my soul.

So, it's a strictly personal choice, but I love this track forever and beyond...

SebastyRock Star 18
Help others find this answer and click "Accept as Solution".
If you appreciate my answer, maybe give me a Like.
Note: I'm not a Spotify employee.
Reply
2 Likes

rossi1911
Community Legend
It's a difficult choice but I'm gonna pick a 2005 song by KT Tunstall. I have never listened to a beautiful pop song as beautiful as this one.

This is a great thread, @Jpgchief!

I’d say that my current favorite track from 2000 to the present is probably “Dead Roots Stirring” by Elder (from their album of the same name, released in 2011). According to Last.fm, I’ve scrobbled it 100 times since discovering it last year. I really like the hypnotic rhythms, thundering bass, and majestic riffs, as well as how the song has multiple “movements” and changes considerably over time.

TreyAnastasioRock Star 6
Help others find this answer and click "Accept as Solution".
If you appreciate my answer, maybe give me a Like.
Note: I'm not a Spotify employee.
Reply
1 Like

I'm glad you like it @TreyAnastasio and that's a fantastic track surely one of their most streamed and by the way what do you think about their album released this year IMHO is one of the best albums of the year...

But let me know your opinion as an expert and true die-hard Elder fan please.

Hi @Jpgchief, I think that Omens is a wonderful Elder album as well; thanks for reminding me about it, as I hadn’t listened to it for a while and have been really enjoying it today. I’m not a music expert or even a long-time Elder fan per se (they are currently my favorite band other than Phish; however, I discovered them just last year). I’m glad to share my opinion regarding Omens anyway, though:

It’s definitely a change of pace towards more of a progressive rock/metal focus (which Elder hinted at on previous albums, but hadn’t expanded upon to such an extent as they have on this release). Perhaps what I like most about this stylistic shift are the evocative soundscapes that take the listener on a journey throughout Omens; it sounds both more melodically lush and contemplative than previous releases. I also like the use of keyboards in this album, which play more of a more central role here than on other releases of theirs; the Rush-like synths in “In Procession” sound really cool to me in particular, as they complement the guitar and bass nicely. However, I think my favorite song from Omens is “Halcyon,” especially the relaxingly repetitive instrumental beginning part (which sounds comparable to their The Gold & Silver Sessions release) as well as the epic guitar riff that joins the keyboards towards the conclusion of the track.

I think that the range of musical styles that Elder can play really well attests to their versatility as a band (their songs are in Spotify’s Stoner Rock, Neo-Psychedelic Rock, and Prog Rock playlists); I’m curious what their next album will sound like, since their sound has continually evolved with each new album.

TreyAnastasioRock Star 6
Help others find this answer and click "Accept as Solution".
If you appreciate my answer, maybe give me a Like.
Note: I'm not a Spotify employee.
Reply
2 Likes

Thank you @TreyAnastasio for your commentes, I have always loved the way people talk about their love for music and definitely, they have great soundscapes in this album, I can remember previous the release of their lead single was a big thing, and a monster track over 10 minutes a thing of beauty, in fact I did added the release day (February 25 2020) to my Playlist Hot Stuff Metal . 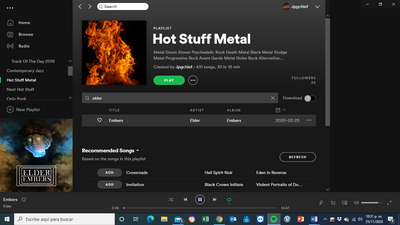 After that, I was counting the days for the album Omens to be release.

JpgchiefRock Star 14
Help others find this answer and click "Accept as Solution".
If you appreciate my answer, maybe give me a Like.
Note: I'm not a Spotify employee.
Reply
2 Likes
SUGGESTED POSTS
Log In