I'm asking this question out of pure curiosity.

Also trying to be understandable because making hay for a week in the baking heat has left me poorly coordinated.

For instance, has music or perhaps a specific artist changed the way you choose your clothing or influenced how you speak?
Do your favourite artists have any power over what other music you like (in terms of what they listen to / recommend)?

Do you feel your life would be very different with less or more of music listening?

All these little things and more, feel free to discuss below ✨ 🙂

SebastyRock Star 18
Help others find this answer and click "Accept as Solution".
If you appreciate my answer, maybe give me a Like.
Note: I'm not a Spotify employee.
Labels:
Reply
2 Likes
5 Replies

Actually yes. My style of music has changed when I discovered Jay Eskar songs but I've never changed my way of clothing or talking to people.

I think music and artists can control ourselves when you actually fall in love with what they're doing, and...what do you think?

I can't give a specific artist who had any power to my music preferences, in fact, every artist more or less make you appreciate certain genre or style of music and their individual approach to that.

I can't even think of a possible scenario of my life without music, as I told, every person is used to listening to music from a very young age. It would be indeed very different without your favorite tunes. I don't think there is a person mad enough in the Community here, who will try to stop listening for even a week, to tell us what it feels like 😄

MartinStoichkovRock Star 11
Help others find this answer and click "Accept as Solution".
If you appreciate my answer, maybe give me a Like.
Note: I'm not a Spotify employee.
Reply
4 Likes

During the past couple of years, I’ve mostly been listening to stoner rock/doom metal and heavy psych/space rock, which is a change from when I used to listen mostly to jam bands like Phish and the Grateful Dead. However, I don’t think that this has changed the clothes that I wear (aside from occasionally buying merch) or the way that I speak to any discernible extent. Nor do I often enough listen to interviews of band members to find out what music they like or recommend, and most of the artists that I like don’t have public playlists on Spotify such that I can see what music they’ve been listening to.

There are exceptions, though; for example, I’ve been listening to more of Black Sabbath in recent months, since reading about their strong influence on stoner rock and doom metal, and noticing how so many bands that I like in these genres praise Black Sabbath’s music. More recently, I noticed that a band that I listen to called Mountain Witch put up a few public playlists on their artist page, including (unsurprisingly) a Black Sabbath playlist, but also a playlist of music from a band that I hadn’t heard of before called Pagan Altar (which I ended up really enjoying and added some of their tracks to my library).

If I listened to less or more music, I’m not sure what would happen. I would guess, though, that if I listened to less music, I would probably play guitar more often in my free time instead. And if I listened to more music than I do normally, I imagine I might get more picky about the music in my Spotify library, but I might also discover more music by spending more time on Spotify; so in this case, I would imagine that both additions and deletions of songs in my library would become more common, and my playlists would therefore probably become more dynamic.

Another way that I think music has influenced my life is by informing what comes to mind when I play my electric guitar. I used to mostly play whimsical, extended single-note improvisations, similar to the music of some jam bands; however, now I mostly play slow power chords interspersed with bluesy soloing that sounds more similar to stoner rock/doom metal. Occasionally I’ll put on a Phish or Grateful Dead concert and (try to) play along with the music; however in recent months, more frequently I find myself looking up the chord progressions or tabs to songs that I like by bands such as Fu Manchu, Kyuss and Dopelord to practice. I’m also considering downtuning my electric guitar, since it seems like most guitarists in these genres that I enjoy use some sort of drop tuning.

TreyAnastasioRock Star 6
Help others find this answer and click "Accept as Solution".
If you appreciate my answer, maybe give me a Like.
Note: I'm not a Spotify employee.
Reply
2 Likes

When I like something, I become OBSESSED with it. I was a huge fans of boybands growing up, and thus fandom internet circles surprisingly exposed me to a ton of other music was pop-adjacent that I wouldn't have delved into otherwise (Alot of more indie/folksy stuff and then R&B stuff as well). Music fandom helped me become more aware of  history in some cases, my own emotions, other cultures, etc... It helped me have a more "worldly" view from my computer screen.

My current partner is in a mathcore band, and so now I'm learning more about heavy music, metal, prog rock, math-y music. Music plays a big part in our relationship even though we have different tastes ...It allows us to share tracks that we wouldn't normally listen to and constantly share new things! Also they tour with their band so that is helping them see the world and have all these awesome experiences. Music is so powerful!

Thank you for commenting! 😁

Uh, true @MartinStoichkov, doubt there is anyone here that would go for weeks at a time without music.

To answer the question myself...

I remember the wide-eyed stare at a radio playing a CD containing Atlantic Ocean - Waterfall. That was the gateway to house genre.. and onwards, to drum&bass.

I started incorporating music into all sorts of things when I first got the sound system as a birthday gift.
All the parties I wrote stories about with my self-created characters would have awesome music, but very specific songs
My 'website' was about my favourite songs.

The intense fan period of listening to nothing but Empire of the Sun was when I really wanted to speak English better to speak to other fans, and I also wanted to draw portraits of the guys and make some apparel.
First serious dabbling in oil paints. Graphite portraits that would be reminiscent of the guys. Introduction to beading and sewing.

When I went onward and got my laptop, I got into Sebastian Roth's music (Sin with Sebastian, Deva Sangeet) and I.. painted him. He saw it and was impressed beyond any limits. We talked a lot.
He influenced me a lot with the spiritualism (he is buddhist) as well as other aspects. I 'borrowed' some of his phrases and I also ended up using the 😉 emoticon a lot.

The ongoing love for the artist refined my graphite drawings a lot.

And obviously I'm using this repository of endless love for Amon Tobin for that too.

It seems that... if I hadn't gone into loving music as much as I do, I don't know how well I would draw. Would I even care about painting portraits in oil, I simply don't know.

Same goes for dabbling with beads and crafting in general. Making apparel has given a rather solid foundation of wins, fails and how to fix the fails.

It also seems that music is a very reliable link for solid friendships for me. Doesn't have to have matching taste. Just a love for music is enough. : )

Tl:dr - with the power of music, this was possible: 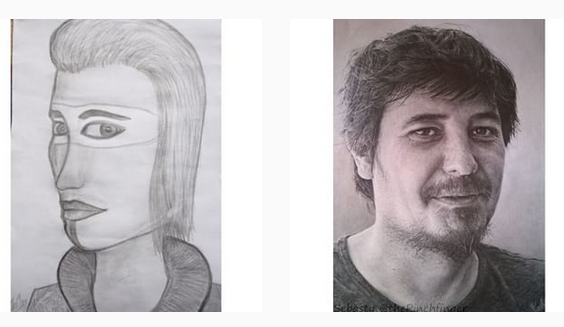 Oh, and about artists influencing me to listen to other artists - I love it when they create "curated by [artist]" or similar playlists on Spotify, eg Thys has one called "A Short History of Decay" that he updates regularly.
Occasionally I would try open-eared listening to something I would have had no interest in earlier because it was mentioned by Amon Tobin.

SebastyRock Star 18
Help others find this answer and click "Accept as Solution".
If you appreciate my answer, maybe give me a Like.
Note: I'm not a Spotify employee.
Reply
1 Like
SUGGESTED POSTS
Log In