Your musical self 10 yrs ago vs now

Your musical self 10 yrs ago vs now

I have a fun little question, so here it goes!

Imagine you met yourself from 10 years ago. You give them your playlist of current favourite songs, or if you have last.fm, your top10 artists, albums and songs of the decade.

What do you think they'll say once they give all this a look / listen? 🙂

Looking forward to your replies 😁

SebastySpotify Star
Help others find this answer and click "Accept as Solution".
If you appreciate my answer, maybe give me a Like.
Note: I'm not a Spotify employee.
Labels:
Reply
3 Likes
Reply
Topic Options
12 Replies

This is a great question, @Sebasty!

I think that if I gave my past self from 10 years ago these listening statistics from the past ~1.66 years since I’ve had a Last.fm account, 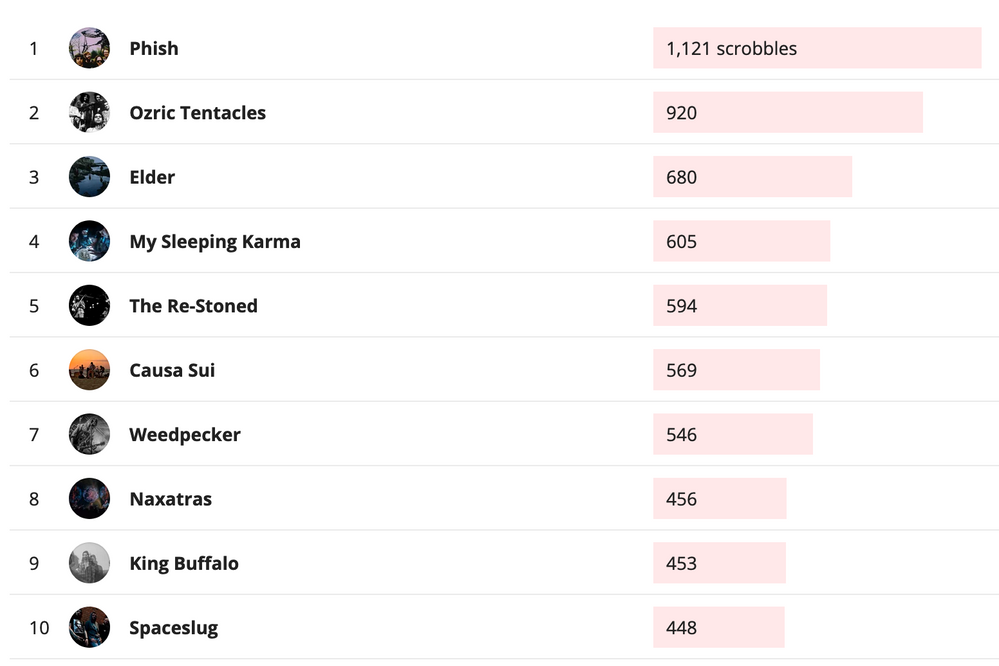 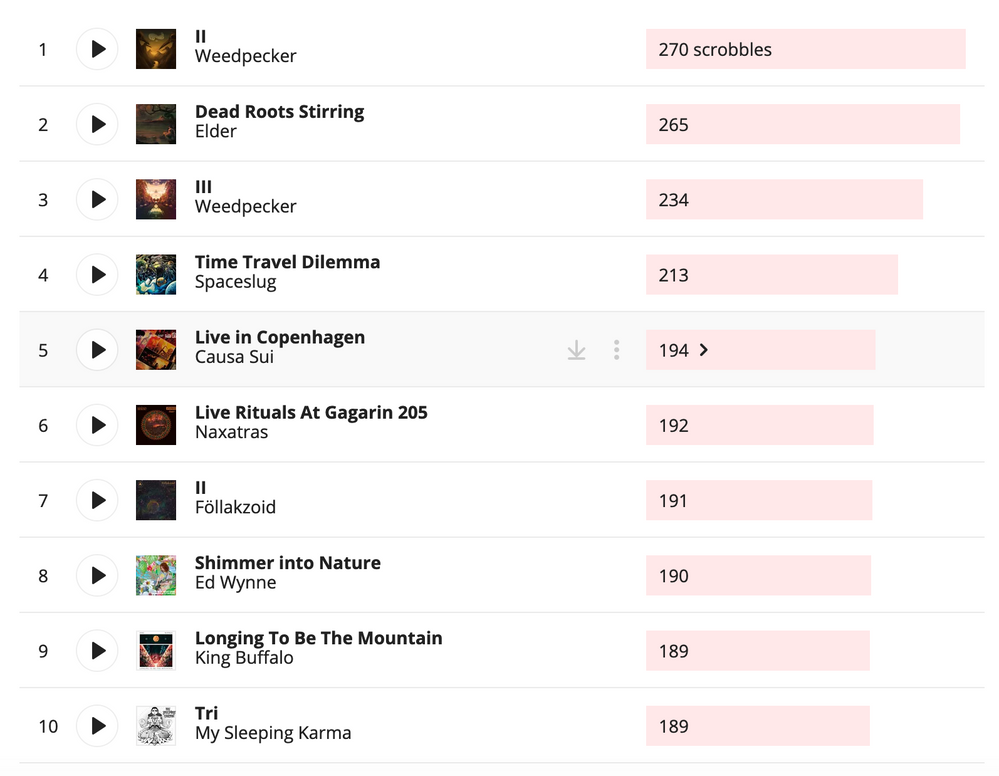 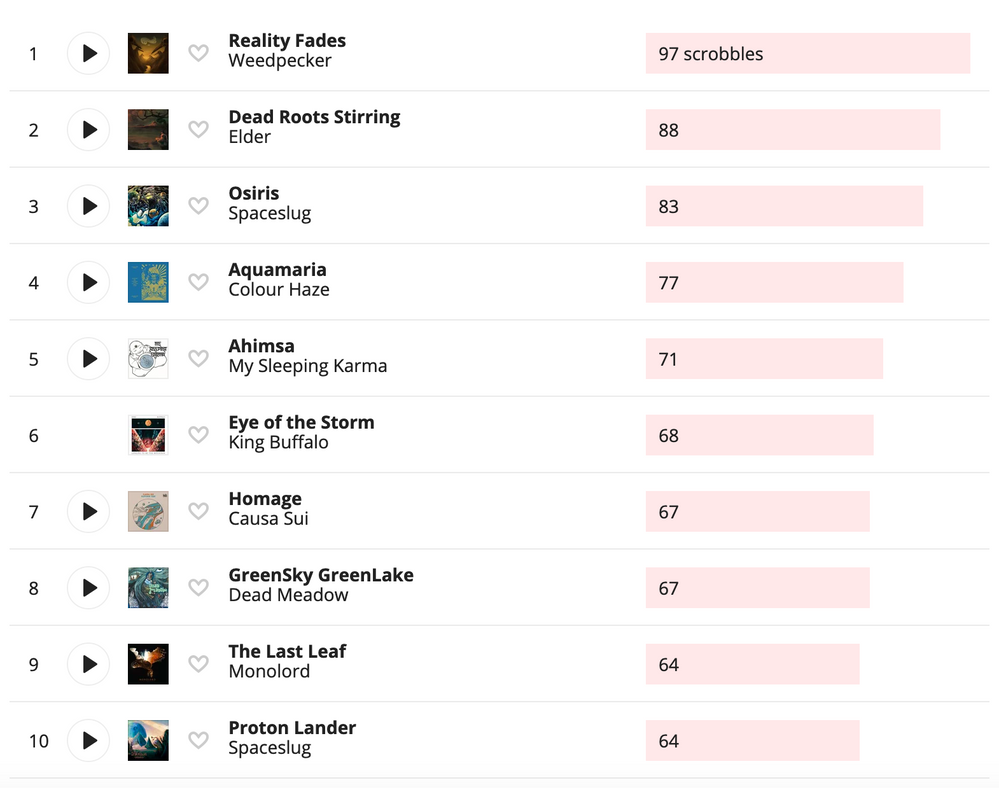 my first thought as a 20-year-old in college would be that I only recognize Phish and Dead Meadow in the lists (though I would discover Ozric Tentacles soon). I’d probably say to my future self, upon seeing Phish at the top of the artists list, something like “Great job on keeping up the Phish fort!” since I think I discovered Phish when I was 19 and was just getting into their music at the time. I’d also probably wonder why I haven’t been listening to the Grateful Dead as much in the future, since they’re not in my top 10 artists list (they’re 11th).

Then I’d probably try to look up the other artists in my top 10 lists to check out their music, and probably really enjoy the music of most of the bands that I could listen to back then (Ozric Tentacles; The Re-Stoned; Colour Haze; My Sleeping Karma; Causa Sui; Föllakzoid; Monolord; and Elder, who had only released their self-titled debut album (I’d probably be really impressed by their Dead Roots Stirring album when it would be released on January 1st, 2011!)). I say that I would probably like these bands that I hadn’t discovered yet at the time, since I enjoyed listening to other psychedelic rock and metal bands when I was 20, genres which these bands are representative of.

For the other bands (Spaceslug, Weedpecker, Naxatras, King Buffalo, and Ed Wynne’s solo project) that I presumably wouldn’t be able to find any music from online at the time, I’d probably be grateful that I knew about them before they existed; and I’d look forward to hearing their music once they would form as bands and start releasing albums.

TreyAnastasioSpotify Star
Help others find this answer and click "Accept as Solution".
If you appreciate my answer, maybe give me a Like.
Note: I'm not a Spotify employee.
Reply
5 Likes

Your past self would have embraced your current favourites 😄 That's somehow so lovely to see.

I was a fan of Empire of the Sun approx 10 years ago or so, drawing my first portraits and listening to this band a lot, whilst also (re)discovering some club music and artists like Enya from my parents collection of CD's and the radio.
I would give that past me the following lists:

I imagine I'd be rather shocked seeing these lists as I'd only recognize Gorillaz and Robbie Williams from the first list. Even more shocking would be the fact that NOTHING of Empire of the Sun is featured in any of these three lists.
How could I betray Luke Steele and Nick Littlemore like that?? 😧 lmao

Also, who in the earth is Amon Tobin and why are my lists full of this artist?

I suppose I would be into Darkside and perhaps Two Fingers a bit. I would like Metatron because back then I was also into rich lush sounds, considering how much I used to love Country and The World by EotS.

And Two Fingers... because it's bass-driven beat stuff. Way beyond any of the stuff I had heard from the radio, but I might be into it.

Also, since I found out about LTJ Bukem and Makoto a little later, I might have liked Bricolage and Supermodified by Amon Tobin, Cujo, and likely also Boards of Canada. 1969 by BoC could have been a favourite back then too.

However, I am pretty sure ISAM and Fear in a Handful of Dust would have weirded me out quite properly. Odd Nosdam even more so. Same goes for that Gonjasufi track, probably. Bu who knows, maybe I could have liked these back then too. I'm sure my mother would have appreciated me blasting stuff other than EotS for a bit 😄

I wish I had any idea what I would have thought about the Melodrama tune.
It's such an incredible audiodrug...
At the same time it doesn't have a dancefloor beat as much. I don't know.

Another thing that the small me would find weird is my current liking for psychedelic folk and experimental (bass) music. : )

SebastySpotify Star
Help others find this answer and click "Accept as Solution".
If you appreciate my answer, maybe give me a Like.
Note: I'm not a Spotify employee.
Reply
4 Likes

My current Last.fm top artists of all time:

So it has not changed that much, I guess. 😉 Maybe less classical music back then.

And thank you @Sebasty for the original question - took me some time to do my research before replying to the thread 🤣 📉 I thought I was more familiar with the Last.Fm features.

Looking at my Last.Fm stats, you can first see my all-time most scrobbled artists here. Focusing on the challenge, these are my favorite artists if I look back 10 years ago.

Checking them again now, this is what I see. Turns out I kept my passion for electronic genres accompanied by female vocals, but also tested out some new taste possibilities over the years.

Mine hasn't changed much, but I'm only 17 so ten years ago I wasn't listening to much radio. 😊

Nice one @Ivan! Didn't know you were such a Lily Allen fan - I think she's great, and I have a much better appreciation of her music and career after reading her autobiography last year - My Thoughts Exactly.

This thread actually reminded me that I'd unlinked my Last.fm Scrobbler from my Spotify account. I've now rectified that - I'll make sure to check back in 10 years' time and give you all an update 😉

Man imagine changing your musical genre from Hip Hop/Rap to Country Music. Two totally different taste. Yet some how it happened to me

Keanu_CSpotify Star
Help others find this answer and click "Accept as Solution".
If you appreciate my answer, maybe give me a Like.
Note: I'm not a Spotify employee.
Reply
3 Likes

@Peter I love Lily Allen and I'm not surprised you appreciate her work!

Her videos gave me first impressions on how the UK looks like in "street view" before my first visit there in 2016.

Thanks for sharing the book title. Maybe it's time for me to have look at it as well if it's so inspiring. 📚

Can't wait on your update in ten years 🤣 ⌛

I'm looking through your list of current year's favourites, @Ivan and I recognise quite a few artists I used to listen to as well before 2015 and Amon Tobin.

As of my last.fm.. my account is only 5 years old, but i kept a list of my favourite music on a website and i just happened to print it out in 2010...but there is also a working wayback machine link to that thing - see!

As for my tastes in the current year, i guess this last-fm listing gives a fairly good idea. You can switch between artists, albums and tracks tabs.

It is quite clear I listened to a lot of radio back in 2009 and so, and my current tastes are much more electronica-oriented and ..containing quite a lot of obscure stuff.

I was proud of my 'obscure' musical taste back then, so I just imagine the current state would make the small me quite excited, even if I listen to some really odd stuff.
I am on a bollywood wave right now. : )

SebastySpotify Star
Help others find this answer and click "Accept as Solution".
If you appreciate my answer, maybe give me a Like.
Note: I'm not a Spotify employee.
Reply
4 Likes

This discussion made me think of my passion for music back in the days when I was in my late teenager years. When I had the chance to communicate with people slightly older than me in terms of exchanging music and recommendations I was always so filled with respect towards them and their knowledge and felt so inspired and enlightened. And this is how I managed to collect my broad listening experience by far.

No idea why, but I always imagined music taste as a vital part of one's lifestyle. I guess this is a matter of personal values after all, but the examples are everywhere among friends and relatives. I was always impressed if someone recommended me music that I'd stick with after trying it out. So years passed and I became this experienced older person that can give you amazing and precise recommendations on what to try next.

@Sebasty I went through your Last.Fm stats as well. I can share the adoration for Amon Tobin and Cujo - saw him live in Sofia back in 2008 and left me speechless. Thumbs up for Technical Itch and Noisia too, bringing me back to my D'n'B-period. I started the day with some Ed Rush and Optical while on the subject 📻  🎶

By the way, you can also import your complete Spotify streaming history in your Last.fm account with the free Last.fm Scrubbler desktop tool for Windows if you request it per email from Spotify in your Privacy account settings (the automated request will only include your last 365 days without album info).

The drawback is that the imported scrobbles will get the current date due to necessary restrictions in the Last.fm database, and you can only import up to 3k scrobbles per day, so large Spotify streaming histories will take a while.

The reason for still doing this might be to increase the scrobble counters for artists, albums and tracks in your Last.fm library, so your recommendations will benefit from that increase, especially if you're a new Last.fm user with an empty account.

Ten years ago I was graduating college.  If I listened to the music that I am listening to now, I'd say that these are great and be amazed at the amount of music I have discovered because I have been focused on finding as many good songs as possible.