Hi, y'all guys.  This is one of my oldest threads and also one very successful, the whole idea here is to give all these artists an audience trying to help them out to reach more people and get on your Spotify stage, the keyword for me here is SUPPORT so join me and share your newest discoveries (remember the newest the better nothing older than a month please).

Updated, with more or less than 150 recent tracks!!!

With this Playlist not only we are going to enjoy this music, but also it gives the opportunity to these new brilliant talents.

I believe the selection is pretty good, I hope to enjoy it. Each song/artist won't be here for more than 28 days!!! 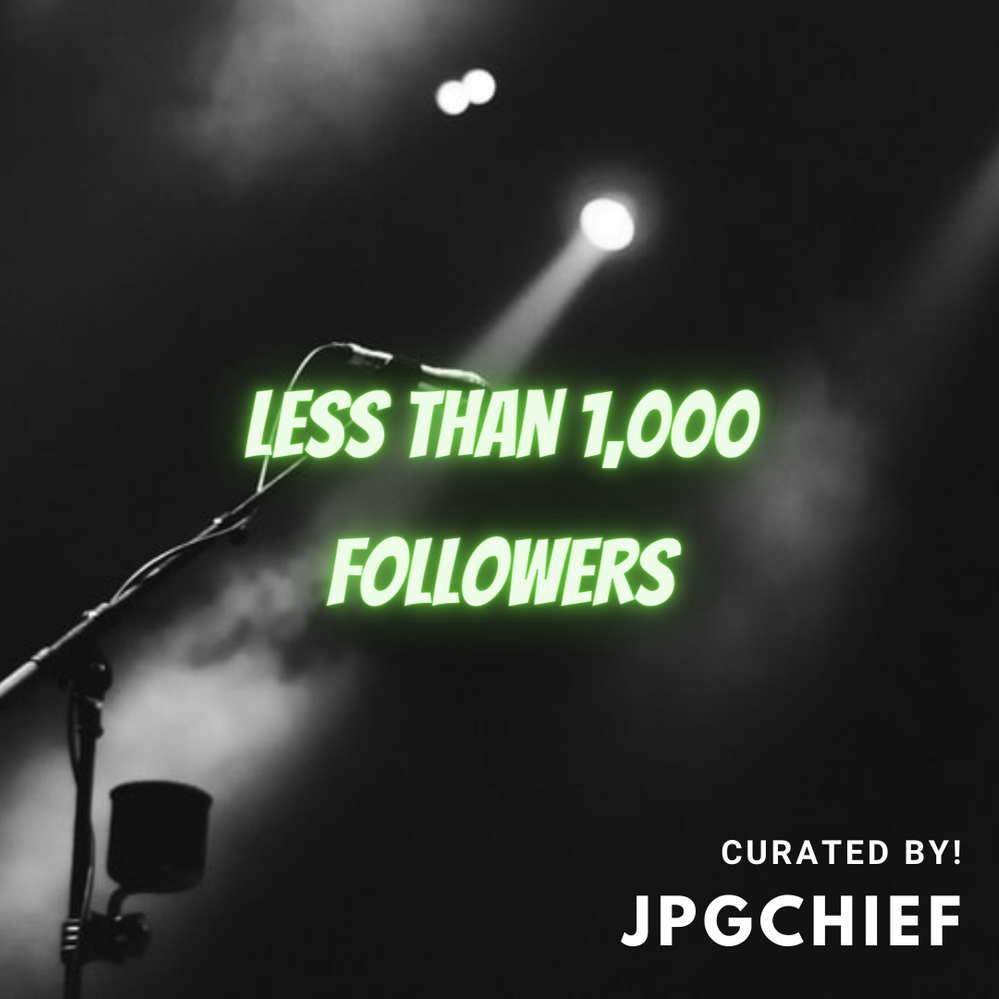 JpgchiefRock Star 14
Help others find this answer and click "Accept as Solution".
If you appreciate my answer, maybe give me a Like.
Note: I'm not a Spotify employee.
Labels:
Reply
58 Likes
Reply
Topic Options
474 Replies

New music added to the playlist

Support the ones that you enjoy the most!!!

Hey, I hope you're having a great week, I want to share with you a cool story about this band, I chatted with Melissa last week about the release and the story behind the song, and she opens her heart about it and is better you to read it, if you are a fan of "The Who" you are going to love it, here you have it:

"Basically, when I met Strontium, we were just friends but I liked him instantly. I was with another fella at the time, but I wanted to impress Strontium and I found out he liked The Who. So I bought a compilation CD of theirs to listen to and then eventually started seeking out full albums. When I was no longer with the other guy, I sent Strontium love notes with obscure Who lyrics to woo him. They have become a band that we both really like, he is still the more hard core of the two of us, but even when I started playing years ago, he directed me to Pete Townshend's unique rhythmic playing as a way to develop into a better musician. And I try to emulate some of his rhythmic accents in this song, as well as others.

The song itself is one of our few where the majority of the lyrics were written by Strontium, not me. I had the initial idea of the chorus/bridge being Pete and Roger when we were in the early stages of just jamming because I keep hearing those names in my head and I had the chorus melody figured out, but it was a very different song then. Strontium decided it should be about Pete Townshend and Roger Daltrey and I reluctantly agreed because I didn't know he planned to write the lyrics and I didn't feel up to the task. He did a great job of it, and I only made a few minor edits to help improve the flow of the song. This is also one of the few songs where our daughter contributed some backing vocals to it. She and Strontium are singing Pete, Pete, Rog Rog in the background as well as ukulele! (We added that because I play an electric baritone ukulele instead of a guitar - I have small hands and had a bad finger injury years ago, so I have always felt like a better player with 4 strings rather than 6."

Support these bands, at least the ones you enjoy the most, follow, stream, and add them to your playlists.

This is my new melodic house and cinematic music EP. Greetings from Lithuania! 🙂

My new song is out now! This one really came from the heart (no pun intended) so i would appreciate a stream or two. https://open.spotify.com/track/0xzZQFGF8HkYnzpcg87PF1?si=549f0f824bc144d1

hope you can all help us out - here's the first track from our upcoming 5th album ! really appreciate any support ! https://open.spotify.com/album/4TVJ2LliINBLnicWufEXou?si=vB5_2EQ1Tj6w3qcmIUzkLg

This is the second track off of our recently released debut instrumental surf album, and it has a fun and upbeat vibe. Thanks for listening!

Hey, I hope you're enjoying your day, no matter when you read this, I'm happy to be here sharing parts of an interesting conversation that I have a few days ago with Charlie Edwards aka "I've Tried Sleeping" a veteran having his debut only a few days ago, he already released 3 track of his debut self-titled album, the last one this past Friday

Talking about the album Charlie said "This is a Clash record. Urgent, bristling. It puts a foot on your throat from the start and never relents. It is album rock. A 45-minute piece of music meant to be listened to from start to finish. It is not a 14-second soundbyte to be dismissed. At some point along the way, I was so overcome emotionally by each song that I was unable to make it through singing it. This became the bar or standard for the ones to keep and the ones to throw back."

You can find this newest track on this playlist but I suggest you listen to all his tracks released.

Cocktails at 6 is an “indie artist that creates Chill, Ambient, Electronica, Rooftop, Lounge, Poolside, Sunset Music for the 21st Century.”

Hey, here you have a few tracks added to this playlist, check them out and if you enjoy them, support the artists, one way is to follow them, also you can give them a green heart, add them to your favorite playlists, and stream, stream, stream.

The first two albums dropping soon, stay tuned (The Brouhaha is due out September 24 really dope album, and The Baker's Basement September 30th and is a thing of beauty)

And you can find more in the playlist, don't forget to leave a follow to stay updated.

Support your favorites, and them to your playlists.  All the best!!!