It's a super useful feature and without it it's just painfully long to add each track individually.

Thanks for the information you gave us and for your patience!

We're happy to announce that this issue has now been fixed! Please do a clean reinstall to make sure you're using the latest version of Spotify.

If you're still having troubles, don't hesitate to let us know in the Help Boards. We'll be happy to lend a hand.

Fresh news from customer support, hopefully true and not me just being fobbed off, that it's an issue being worked on... 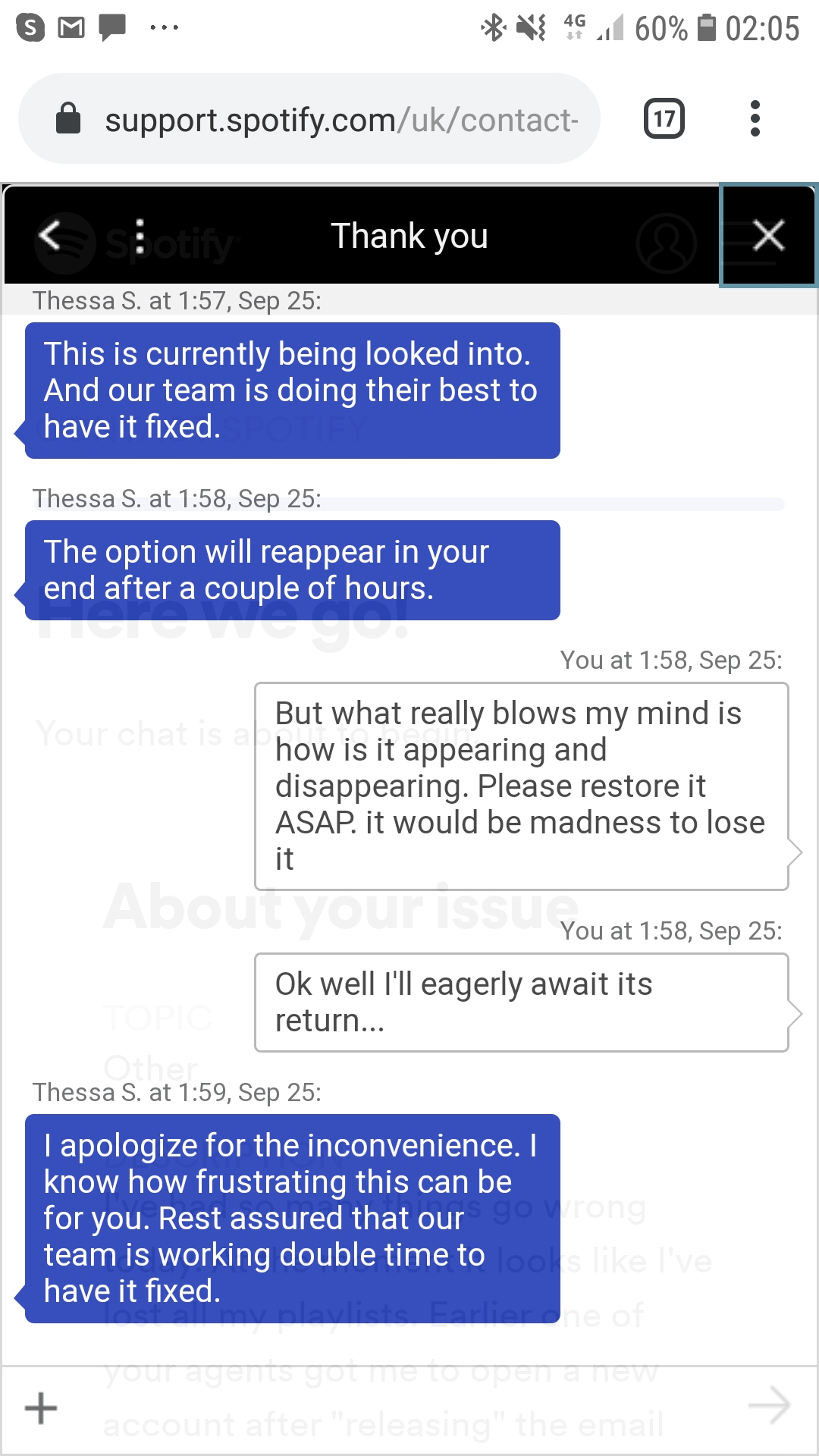 You can like the album, go to the albums menu in your library and add the album to a playlist from there.  It's clunky but better than adding one song at a time.

Spotify needs to bring back the feature to add full albums to playlists. I literally came here just to see if anyone mentioned this. This is why I have automatic updates turned off. I accidentally clicked update, while trying to update another app. I've had spotify for 10 years, and have had premium the entire time. I got it while it was in beta, before it blew up. This is extremely frustrating! Why take away stuff that isn't a problem? I'm all for adding features, but why take away features? I don't continually pay money to gradually get less features. I even upgraded to the family plan. This is pretty shitty! Definitely not a happy customer right now!

Is this a bug or was this intentionally removed? The fact that this feature was removed is pretty bizarre, since clearly the functionality has existed in the past and has been useful for many. Forcing people to go through the "search" function to find this feature is pretty terrible UX. Very disappointed and confused as to why this has been removed, please add it back as soon as possible.

Spotify is always making changes to their software, the only thing we can do is hoping that they listen to our requests and respond 🙂

This would be awesome, I like the way you sort your music! Maybe try to put in a feature request on the ideas page! https://community.spotify.com/t5/Ideas/ct-p/newideas

Edit: Actually it looks like there already is one!

To add on to Andrew's response, here's a recent suggestion that you can add a vote to and leave a comment on: https://community.spotify.com/t5/Idea-Submissions/Mobile-Playlists-Bring-Back-quot-Add-Full-Album-to...

Let us know if there's anything else we can help with!

Just found out that there is an idea submission requesting exactly what you mentioned! Might be worth taking a look at, hopefully the changes are made soon 🙂

I have been a Spotify subscriber for over a decade. That's a long time and a lot of money to give to a company who make the only app I listen to music through.

So why has a feature which has been around forever been removed? Granted people listen to music differently, but for those of us used to creating playlists and adding whole albums - not just queuing them up or listening to song radio - this is a major annoyance.

It feels like sometimes you are trying to change how we listen to music, instead of just letting us have free reign.

Is it really that hard to bring back that functionality or rather let us have what we have ALWAYS had?