With other apps running, "More Apps" menu is shown in the BMW Connected Drive Menu to switch to other available Apps. 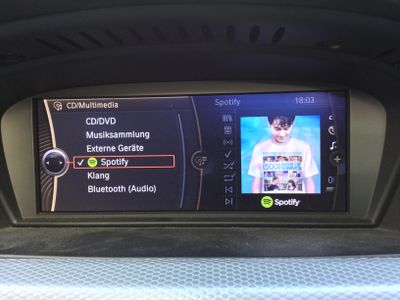 With Spotify 3.9 both devices have been running ok, so it' not related to iOS update but due to Spotify update: 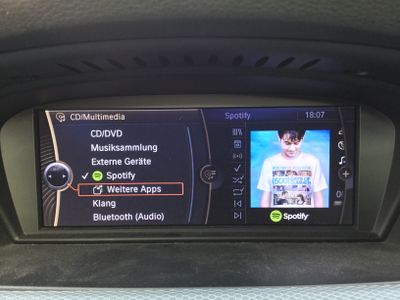 I have removed some info off your post, if you would like i could tell you more about what i removed via PM, which you seemed to have deactivated 🙂

HOw do we fix this? With IOS 9 Spotify stopped working on the BMW 😞

looks like we've to wait for a fix from BMW to get this working again ... anybody else having a workaround yet?

Hi, same issue here... but its not just spotify, its all the Apps system.

Whenever a call comes through, any app playing will stop resuming sound.

Therefore, I'm not sure it's an iOS issue.

In my iDrive menu, when I go via Main Menu -> Connected Drive -> Apps it will still show the "More Apps" menu item when Spotify is running.

The "More Apps" menu item is only missing in the "CD/Multimedia" menu on my car with Spotify 4.0.0.919 running.

This took me a while to find out since I normally only use the "CD/Multimedia" menu, not the Main Menu / Connected Drive Menu / Apps Sub-Menu.

Please report this bug to the official Spotify support to help get it fixed soon !

Additional issue I noticed in my BMW when using Spotify connect. When browsing into the favorites playlist I noticed that the sorting of tracks has been reversed. I now get 'oldest to newest' tracks instead of 'newest to oldest'. This means I have to browse through several pages of tracks to get to my most recent ones. Very annoying. Happens since app version 4.0.0.919

Does this issue only happen with the Spotify app?

If not, it's likely the issue is with the iDrive firmware.

@twcoolen If you're using Spotify Connect, you can rearrange the order of your playlist. Head to the top and tap the filter options below the 3 dots. Sort by recently added to reverse that order 🙂

mlansky
Music Fan
Adam, as already written in my initial post, this bug only happens with the Spotify app. Napster Deezer, or Amazon music app are not affected. Spotify app used the work until 3.9 version only since update to 4 version this bug appeared. There was no uodate to iDrive firmware.
0 Likes

I am also having the same issue as @tndwcoolen. Track sorting has been reveresed to showing oldest first when displayed in BMW Connect. In the Spofity app itself sorting shows correclty, but if I plug in to my car tracks on my favorites playlist are only shown in "oldest to newest" order regardless of how I have actually chosen to sort them in the app.