Status: Under investigation
Submitted by

First off, try to do the following troubleshooting steps on your end:

If nothing of the above helped, then could you also make sure to provide us with the following info, if you haven’t already:

All of my downloaded songs, podcasts, and  audiobooks are not playing offline. All audio would just suddenly stop playing whenever I get disconnected from Wi-fi/data connection.

Note that all of the songs/playlists still has the downloaded icon (green circle with down arrow) beside them stating that they were downloaded but for some reason whenever I get disconnected from the internet, all of them will just have a greyed out title (shown on screenshot attached). I've been experiencing this for months now and I even created a new account to

I've already done all of the suggested fix online such as clearing cache, redownloading the songs/playlists, doing a clean install/reinstall of the app, and making sure that the "Offline Mode" is switched On. Yes they will work for 1-2 days max but will always revert to the issue.

This honestly gets tiring so please let me know if there is a permanent fix as the main reason I got a subscription is to listen offline as there a couple of places where I need to be where data connection is limited. If there's none then I don't think there's still a point on continuing my subscription as the app is not working as promised and I'm not getting my money's worth. Thank you! 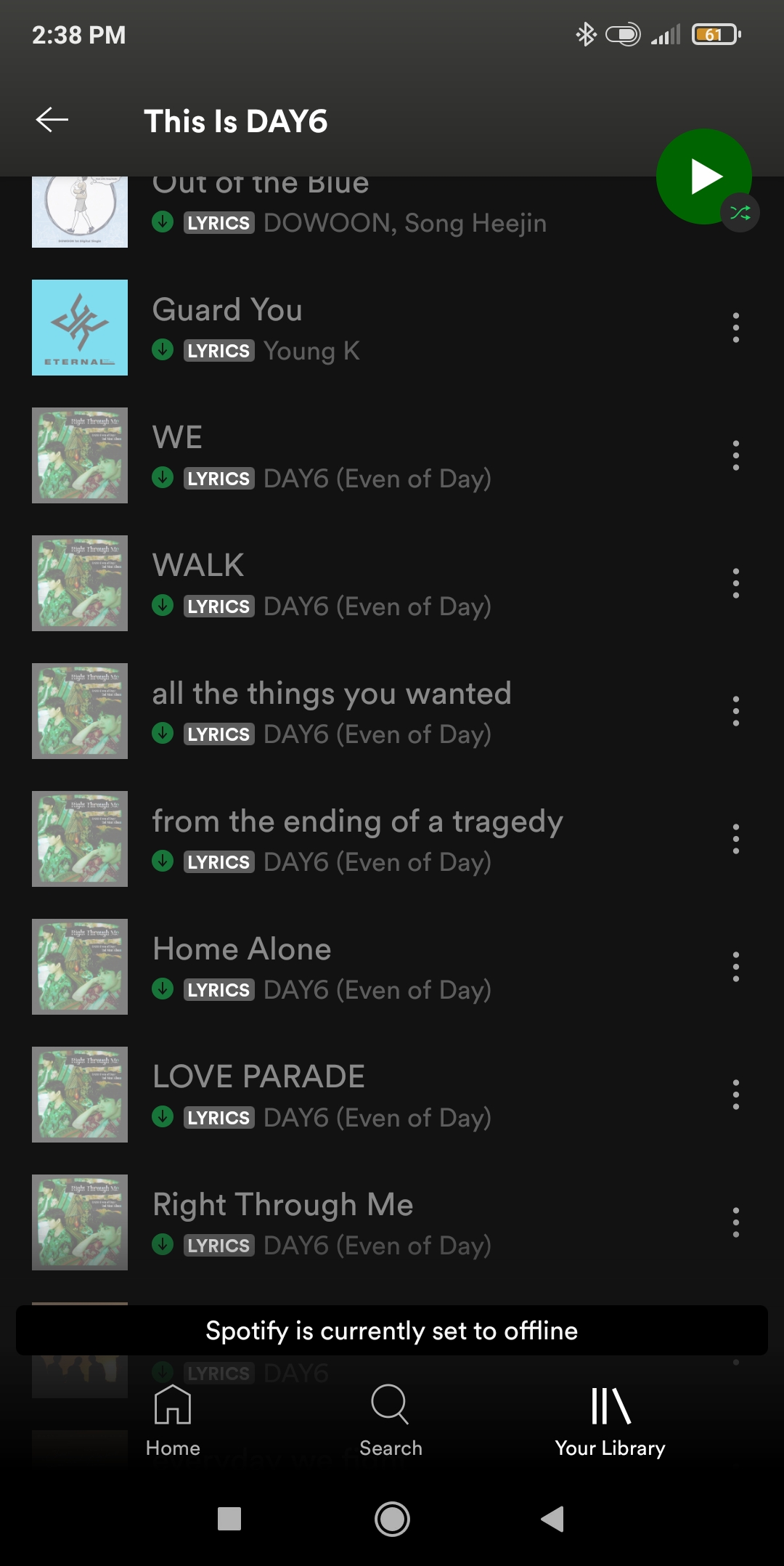 Thank you for sharing your post on the Community.

Great troubleshooting so far, there are other things we can try here to help you sort this out.

To start, please let us know if you're using an SD card to store your downloads, or if you do it directly on the internal memory.

Also, please check that there are no cache clearing apps running for Spotify. Keep in mind that even if you didn't install such apps, some devices have them preinstalled.

Appreciate the response. Apologies on missing this, I had everything downloaded directly to my internal storage. With regards to the cache clearing apps, I don't have any 3rd party app doing this and I also removed all of the restrictions (i.e. battery/power usage, memory and storage permissions) on the app to make sure nothing is interfering it from working.

If it's possible, you can ask a friend/ family member to log in with their account on your device, so that you can check if the same issue occurs with another account. This will help us understand if the issue is account or device related.

I have the same issue. I can't play downloaded music offline even with a premium account. I tried all the suggested fix I could find here in Spotify Community but nothing seems to work.

Thank you for posting on this thread!

In order to better assist you, we'd like to have some more information about your case. Please share with us the make, model and OS of your device, as well as the Spotify version you're running.

Also, let us know if you're using an SD card or the internal storage. Lastly, some screenshots of your playlists can come in handy, this way we can take a closer look at the issue.

Had my brother login using his account on my phone, gave it 2 days and it seemed to be working fine for him. In return, I also logged in on his phone (Samsung A50, Android 11) downloaded my playlist on his phone using the memory card and it worked perfectly as well.

I went back on my phone and redownload my playlists, but it is not working again after an hour.

First off, try to do the following troubleshooting steps on your end:

If nothing of the above helped, then could you also make sure to provide us with the following info, if you haven’t already:

Hey I can't play half of any songs I have on different playlist. This has been going on for over three weeks now. I've did everything to fix this issue but it's nothing on my end. Can this be fixed soon an very soon. If it can't be let me know and I'll make other arrangements. Cause the songs I wanna hear will start playing then after 6 seconds they stop. Help please

I can't play most of my downloaded music on the app, and it's been that way since August. Re-installing and logging out/back in haven't help, nor have updating the iOS of my phone or updating the Spotify app. Please debug.