Connection Issues for users with the ISP Windstream

I've been trying to get into my Spotify web player on my work PC.  (Work PC - hence the web player and not the desktop app)

The entire screen shows as white with all of the menu options mashed to the left just under my profile picture.

I have cleared the cache.  I have tried on a few different browsers.  Other co workers do not have the same issue.  Help.

Thanks for all the reports.

We can confirm this has now been fixed.

If anyone's still having trouble, we'd recommend a quick reinstall for the desktop app, or a clearing of browser cache/cookies for the web player.

Thanks for bearing with us,

I'm having the same problem Sebasty. Could you tell me what to do for a Mac?

I am on a mac. I've tried safari, chrome, incognito, cleaning out caches for safari and chrome, don't have any antivirus running, have put exception for [*].spotify.com.. nothing works. I'm not even able to log in. I'm at a total loss.. 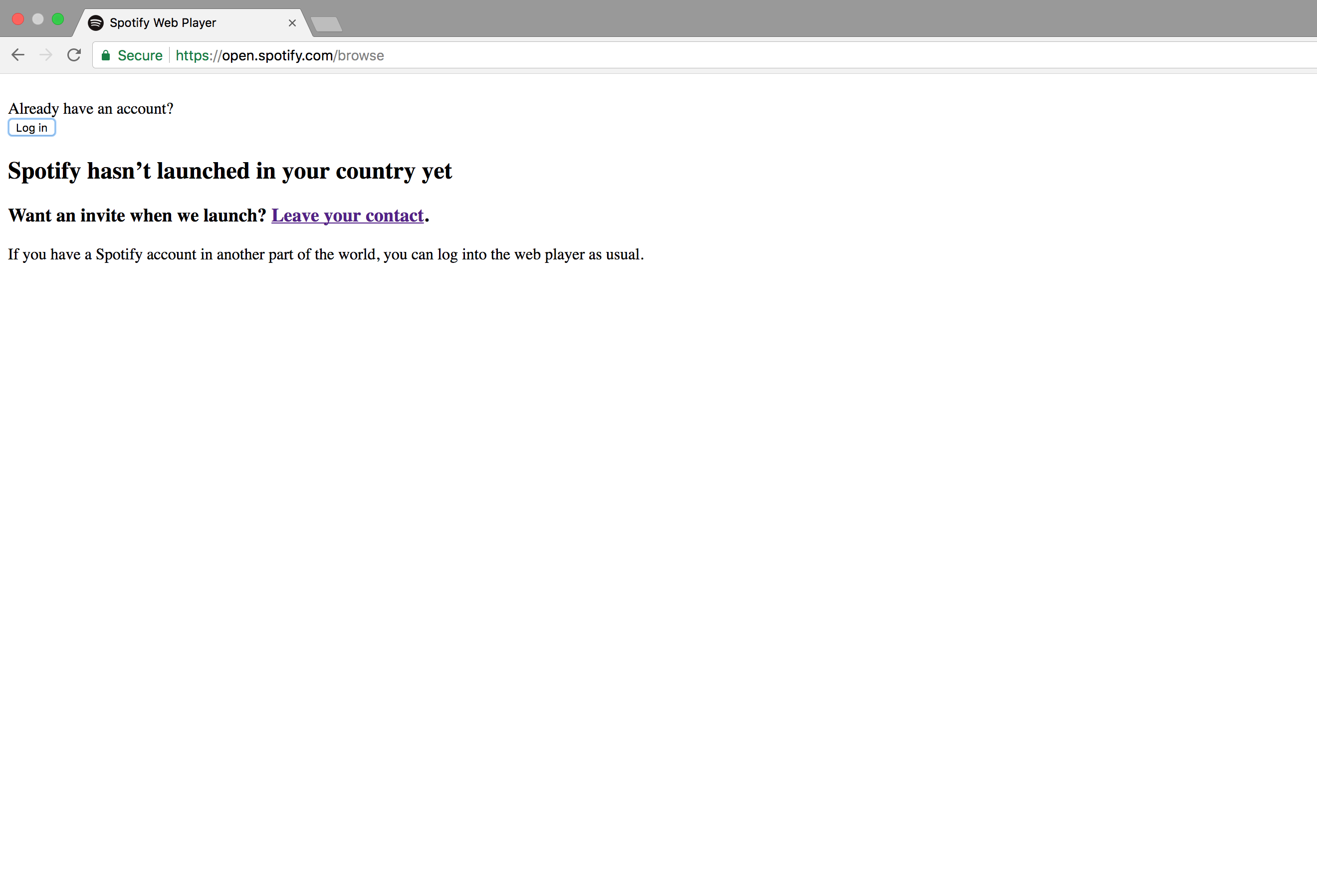 I have the same issue. I thought it was just me. I cannot get artwork on my phone, on my home pc, or my work pc. Music plays fine, but no artwork whatsoever. It started late last week.

I think this may have to do with it..... a few links sent me to this, her eis the screenshot that led me to this: 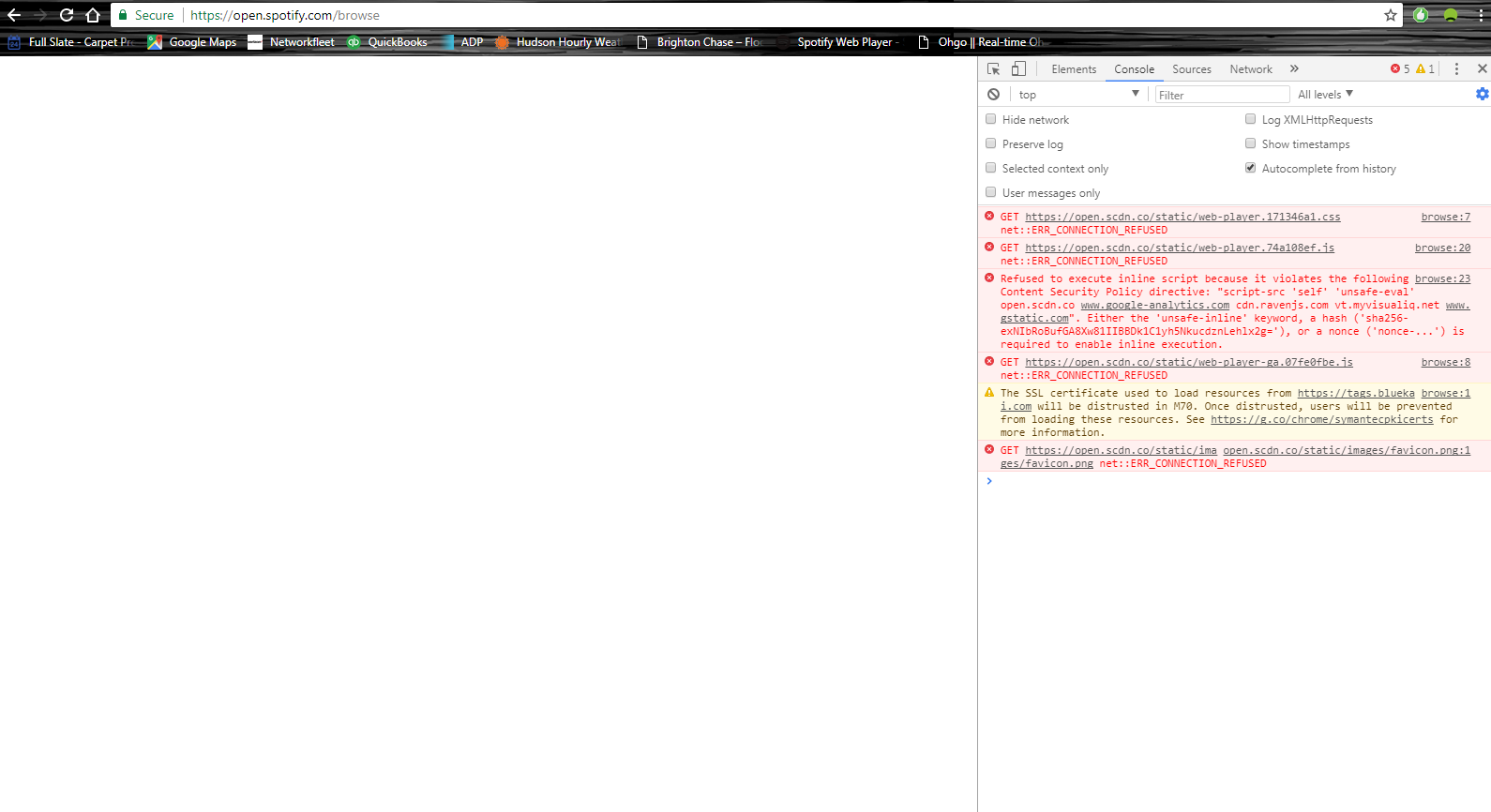 I'm obviously not the most tech-saavy but ya know, I found this as well:

http://www.certificate-transparency.org/
Google's Certificate Transparency project fixes several structural flaws in the SSL certificate system, which is the main cryptographic system that underlies all HTTPS connections. These flaws weaken the reliability and effectiveness of encrypted Internet connections and can compromise critical TLS/SSL mechanisms, including domain validation, end-to-end encryption, and the chains of trust set up by certificate authorities. If left unchecked, these flaws can facilitate a wide range of security attacks, such as website spoofing, server impersonation, and man-in-the-middle attacks.

Because it is an open and public framework, anyone can build or access the basic components that drive Certificate Transparency. This is particularly beneficial to Internet security stakeholders, such as domain owners, certificate authorities, and browser manufacturers, who have a vested interest in maintaining the health and integrity of the SSL certificate system.

Yes, web player still does not work for me. ISP is run by our corporate office; not sure who it is but occasionally I'll receive ISP errors filtered by windstream.net, so maybe Windstream Holdings, Inc. I supposed it's possible the ISP just implemented some changes, but odd so many people are having the same problem in the same week.

Fortunately and thanks to methodair06's suggestion, I did find a download and have the stand-along player working. Perviously I needed Admin rights, but I found one that partially installed with Error 17, but found another forum link that got around that. So I'm actually much happier with the desktop player!

I've tried looking for the program file, but i've noticed that when you donwload stuff of the microsoft sotre it doesn't have a file. Plus i can't even change the settings in it anymore as the app is stuck in an endlessly loading screen.

I also can not download spotify from spotify.com since this happens. I've deleted my cookies, turned off hardware acceleration, disabled proxy, disabled extentions, ect...

But nothing seems to work. Could this be on spotify's end or is it just me?

Interesting. I have this problem myself on my home network and I also have Windstream as my ISP. If they are the problem, God help us. Their support is horrible. At this point I do not believe it to be a browser or OS problem.

On my home network, my windows app and android phone doesn't display any images.  But when I switch my phone to the mobile network, it works just fine.

On the website no images display and when I attempt to download spotify, it says "download.scdn.co refused to connect"...

Almost seems like my ISP is blocking elements of spotify, I don't know...