My Daily Mixes have long been quite good, but now at least one of them is clearly looking at music that I have never listened to (many of the songs appear to be in Hebrew)

Is it possibly related to this issue I was having? And is it possible this is still happening but just no longer visible to me in Recently Played?

While I'm no longer seeing the strange songs in my Recently Played, Daily Mix 6 (screenshot attached) is completely foreign to me. And my Daily Mix 4 also appears to be affected (I listen to songs in that genre but most of the songs are not songs I have listened to or would listen to). 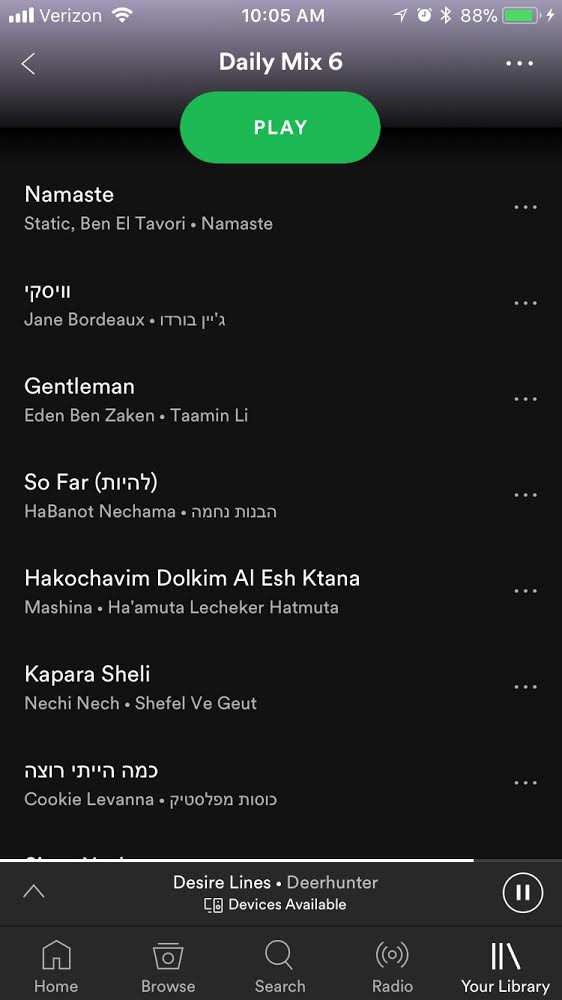 Got it! It might take a few weeks for your Daily Mix to adjust to your listening preferences again. I recommend checking back on this Daily Mix in about a week. Let me know if it hasn't changed after that.

It sounds like someone might be using your account. The steps from this article should help, could you give them a shot? Let me know how you get on.

Thanks and have an awesome day! 🙂

It doesn't appear that you read my initial post fully.

I went through this multiple times for the previous issue which was resolved several weeks ago and which I linked to. Spotify account support removed all my offline devices, unlinked all accounts, and had me create a Spotify password. I've made no other changes to the account since then and have not re-linked any of my other accounts. I have one device for offline usage (my personal phone).

Unless you are saying that I need to go through this process every three weeks, despite keeping the account as secure as possible, then this is not helpful.

Got it! It might take a few weeks for your Daily Mix to adjust to your listening preferences again. I recommend checking back on this Daily Mix in about a week. Let me know if it hasn't changed after that.

I'm having this problem as well. I reset my password, assuming that maybe someone in another country had hacked my account, but my Daily Mix is still full of songs that have nothing to do with what I typically listen to!

manifested0
Casual Listener
@magpie_63 I would check your Recently Played. I was seeing all kind of
songs that I hadn't played show up in there. And several times the other
user and I were fighting over what was playing via Spotify Connect (if you
see the issue I linked above I could even see their device in the list of
Spotify Connect devices).

There was never any explanation as to what happened, but after securing my
account several times on my own to no avail, (log out everywhere, set up
two factor authentication on my Facebook Account, etc), I eventually called
Spotify support and had them unlink all of my accounts which included some
apps like Bands In Town. Then they sent me a reset password link via email
and I set up a password independent of my Facebook account. That seemed to
have fixed the immediate problems (Recently Played, Spotify Connect) but
the Daily Mix is a lingering one as it's still creating lists related to
the music this other user played while our accounts were linked.

Basically, where previously I had Spotify linked to apps to let me know
about shows and share music I was listening to with friends, I keep Spotify
in it's own isolated, walled garden now. There's clearly a problem with
over-linking Spotify accounts so I haven't connected any apps (not even
Facebook) until I get some indication that they can prevent this from
happening again.

No changes. My Daily Mix 6 is still entirely populated with music that I've never listened to.

Thanks for keeping me posted! I recommend reaching out to Spotify here, or shoot them a DM at @SpotifyCares. Feel free to mention this Community post as reference for the steps you've already tried. Let me know if there's anything else.

I have a similar problem that didn't really fit in with other problems being reported. Here's the issue. Every night I listen to a podcast with the sleep timer set to "end of episode." Sometimes when I wake up, I find that my phone was paused on a song by an unfamiliar artist called Zryorc that I have never listened to. This has occured enough times now that Zyrorc has entered my heavy rotation and now my Spotify thinks I like indie music. Can someone help with this problem?