Liking songs doesn't sync between the mobile and the desktop app

We’re happy to say that this should now be fixed for everyone! Just make sure your app is updated to the latest version.

If you're still having trouble, make sure to post a new thread in the relevant help board here.

Here's something you can try out to force a re-sync between the desktop and the mobile app:

Let us know how it goes. Cheers!

Playlists seem to be fine, newly created ones or edits made to them sync immediately.

Hi everyone, in the last few days I've experienced the following issues:

I've tried to log out from the apps and to reinstall them but nothing changed. I would like to know if someone else has the same problems, thanks in advance.

I am also having this problem. Very, very, annoying. Initially, reinstalling the desktop app seemed to work, but the problem has reverted again.

First up, we suggest that you try logging out and then logging back in to your account on your PC. This will trigger a sync between your account and your device.

If this doesn't do the trick, would you mind logging in to your account on a different PC to check if the issue persists?

I have the same issue, I've tried with logging out and even with deleting the apps from the devices but nothing changed

I noticed this on friday when I moved between two computers. I liked and added a song to a playlist, and checking my 2nd device the song was in the playlist but didn't show as liked. I re liked it and moved on, but then the next day noticed the same experience on my mobile device. The song was in my playlist but not appearing as liked.

I decided to check my "liked songs" playlist on my phone and noticed the songs were actually here, and showed as liked. Interesting! I selected the option to view the album directly from the song here, and the song was still not showing as liked. I know sometimes songs/albums can be moved/reuploaded, but this is different since it is the exact same song/album. Especially since the "older" version would still show as liked in that scenario.

So it seems like something is happening where it is still syncing playlists and if a song is liked, but the display for if a song is liked is not syncing when viewing it in a playlist/album/artist page. just my 2cents from troubleshooting it a bit over the weekend.

Hello! Unfortunately that didn't help. I logged out of everything and tested it on two other devices. Albums/songs added on desktop don't show up on mobile and vice versa.

I recently added about 100 songs to my Liked playlist on mobile. However, I am not able to play them from that playlist. Additionally, all newly added songs are missing from that same playlist when viewed from desktop. I reinstalled the desktop app in hopes to force a resync but the problem does not seem to be fixable on my end. Any help would be appreciated, as I do not want to readd all those songs at a later point.

This is the view from my desktop app. Note it only lists the 11 songs I had in there before.

And this is the same playlist on my Android. Here, all 112 songs are listed, but only the same 11 songs from the picture above actually play (I can however play the songs from any other playlist). It seems, the Liked playlist is still considered empty. 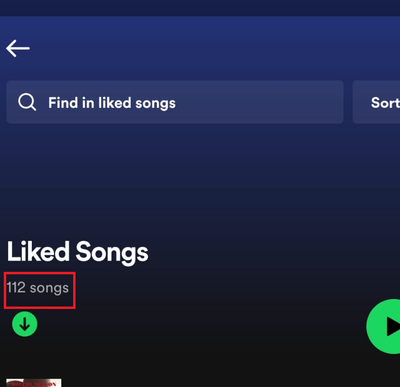 I just realized that this bug is even a little more convoluted than I thought. I was connected via WiFo to my Yamaha MusicCast. If I disconnect, I have access to the whole playlist again (on my phone), but I cannot reconnect. If I reopen the app and reconnect, I once again can only play the same old 11 songs from before. The issue has not been resolved on my desktop, as well.

The same thing happens to me