I have four mixtapes, three work correctly but if I want to open the other one, it just shows an error message (on iOS the german message „Leider ist ein Fehler aufgetreten“, in the mac desktop app „Dein Mixtape lässt sich nicht aufrufen. Bitte versuche etwas Anderes.“).

How can I fix this? AFAIK there is no way to delete a mixtape and let it be regenerated?

We're closing this thread as we haven't heard from you in a while. If you're still having the same issue, just give us a shout.

That's odd. Just to confirm, this is happening on all your devices? Also, could you let me know the Spotify and OS versions of the devices you're having issues with. Last but not least, if you have any screenshots that might be helpful, it'd be awesome if you could attach them.

Hi @Hubo, yes it happens across all my devices (one iPhone, one iPad and two Macs with the desktop client) and already for a couple of months. I had hoped that time will make it go away, but that did not happen until now. During the whole time my other three mixtapes work flawlessly.

Just when I was writing this and taking screenshots I noticed that there are some variations without me being able to reproduce what leads to them: somtimes this mixtape shows an error messages, sometimes it shows up complete empty and sometimes with a single song (but even when I play that song, no other songs are added).

Here are some screenshots from iOS: 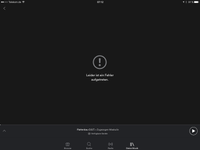 And here are some screenshots from macOS, also some showing an error, other with an empty or almost empty mixtape and a last one showing that other mixtapes work just fine: 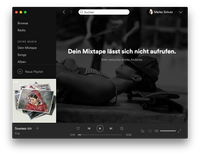 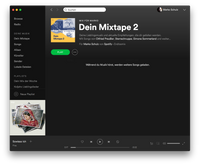 Thanks for the info @datenreisender!

I suggest you try a clean reinstall on all your devices and see if it helps. This usually fixes most problems 🙂
Note: This will remove any saved offline tracks and cache.
Let us know if this make things better.
0 Likes

As it happens across all my devices I don't believe it can be fixed purely with a client side reinstall. Nevertheless I did it on a single device (my iPad) and as expected it did not change anything.

I did a clean reinstall on my iPhone last year to fix another problem and the hassle of having to reselect which playlist I want to have offline was so large, I will rather live with a broken mixtape now.

It's odd that this happens. If possible, try to use a different account in your device and let us know if the same occurs. Just to confirm, you have a total of 4 Daily Mixes but only one is not working?

Let us know if this started to happen recently or after an app update. We'll gather some more info and see what else to suggest.

We're closing this thread as we haven't heard from you in a while. If you're still having the same issue, just give us a shout.