Playlists not showing on Roku

You should be now able to view and search for playlists from Spotify directly on your Roku device.

If you're still having troubles, we'd suggest trying these steps first. If the issue persists, we'd recommend posting about this in the related Help Board. We'll be happy to lend a hand there!

I have the same problem on my Roku Tv

I have the exact same problem

I've been having the exact same problem with my Roku Stick, everything worked fine until a couple days ago. I've logged out and logged back in, even did a factory reset. Still won't load my playlists. 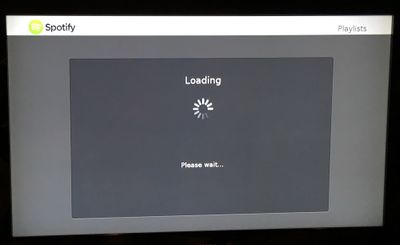 I'm having the exact same problem with my Roku stick. Everything was working fine until a few days ago. The Roku OS says it is up to date (version 7.5.0) and I removed and reinstalled the Spotify app, so it should be the most recent version as well. The search function works fine (and plays music just fine), but when I try to load my playlists, I get the 'Loading' screen. I've tried waiting for at least ten minutes, but nothing ever loads.

Having the same problem with my Streaming Stick Model 3600X, software version v7.5.0.

This is obviously a problem with Spotify - please ask a single engineer to take a look at this godawful app and do something about it. This is definitely not an issue with individual consumers.

Hey @TyronesFrogs! Thanks for writing.

Could you let us know the make and model of your TV, along with some screenshots of how you see your playlists? We'd also like to know if what@Aimee_T suggested worked for you.

(following up from a comment I made yesterday) ...Now I can't even play music through the Search function. Found an album I wanted to listen to, tried selecting it and got the unending loading screen again. 😞

If you can't fix this I am going to cancel my subscription and inform everyone I know how primitive you really are, Spotify. If you can't update the roku app to the point where it's even functional, you shouldn't be forcing people to get a premium account just to use it. I am having the same issues where the page says I have no playlists or starred music. Ruined my night since I was trying to use it as background music for a small gathering. Fix. It.

Have been having this exact issue for ~3, 4 days now. I click on Playlists or Inbox, the loading notification comes up but the app just hangs. I left it overnight once, no effect - it was still "Loading" the next morning. Here's what I've tried and the results:

I would add a video, but OKmamaJ's video shows exactly what I'm dealing with, down to the tracks listed in What's New.

The only thing I haven't seen mentioned is the one issue I found when removing/re-adding my account: Inbox still won't load, and the only playlist that loads is Starred, which registers no starred tracks for my account. This issue is solvable (reinstall app) and definitely overshadowed by the issue of playlists/inbox not loading.