There is no shuffle, and the playlists are much smaller than what I thought a radio station would be working with.  Is nobody else having this problem?  Radio does not seem to be working at all.  If you think I've changed a setting that might be causing this, please tell me.  Thanks.

I'm having the same issue. Quite annoying when you're paying for a service that hasn't worked right for the past week.  Please fix! 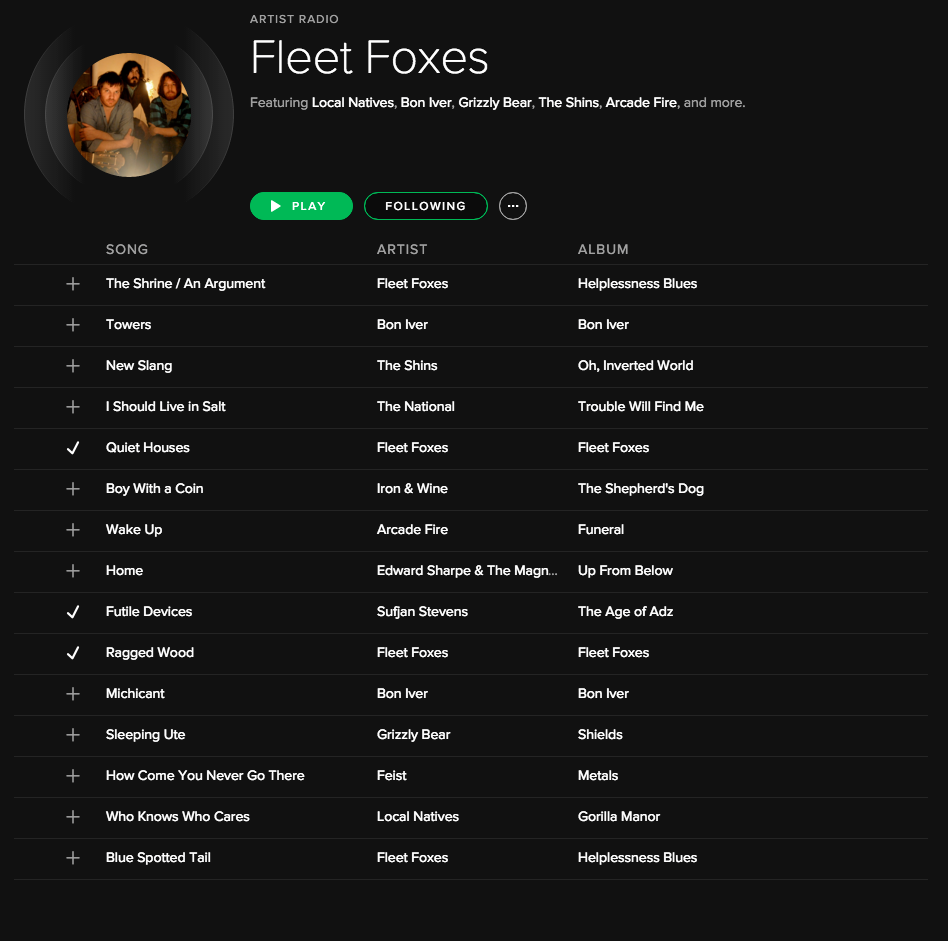 Yes!!  I'm relieved to hear it's not just me.  Thank you for posting the screenshot.  This is the same user-interface that I am talking about.

These pages absolutely do not serve as radio stations.  The songs seem to be limited to just 30-50, and there is no shuffle.  They are basically just playlists of related artists, not radio stations.

Spotify, please fix a.s.a.p!  I use radio stations every day to listen to music at work (and I have to, because I sit next to customer support agents who answer phone calls all day).

I am seriously annoyed by this as well!!

I really hope this isn't an intentional "update" to the way artist radio functions...

Please bring back the old artist radio stations, not just a linear, shortened playlist with no shuffle option!!

Steph_B
Roadie
Status changed to: Not An Issue

@Steph_B "some changes" that resulted in it being broken. But you marked it as "not an issue".

It's broken. It's very broken. Could you point to an explanation of how it works now? Because it worked for the same for years: make a playlist, hit "Start playlist radio" and you get hours of songs that are similar to the songs in the playlist. Now you just get the same songs over and over gain.

Saying it's not an issue is simply incorrect.

Radio is still an available feature, but the way it's presented has changed.

You'll be shown a playlist, that displays 15 songs at a time. As you progress through the playlist, more tracks will show.

When listening to a track of the playlist, you'll be able to see the thumbs up/down icon. When thumbing down a track, it will stop playing and move on to the next one on the playlist, just like before.

We hope this clears things up and we'll make sure to pass your feedback along to the team.

chizdippler
Gig Goer
That helps. If I thumb a song down is it less likely to play next time?
Sometimes I just want to skip a song but would want it to stay in the
rotation in the future.

Okay thanks for clearing that up.

I'm still not 100% confident in this new interface, because the start of the radio playlists still seems to be completely static.  It's only at the bottom of the playlists, when you "progress through the playlist," that you see new songs starting to pop in.  So it seems like I'm going to h ave to move to the bottom of my radio playlist every time I want to hear new songs...?

Is playing thumbed-down songs repeatedly a feature or a bug? I am tired of thumbing-down "Overlove" by Dio, but it still appears on my custom radio a few dozen of songs later. I wrote Overlove just to give an example, but this happens with many more songs. It is not clear how radio works, and what influence, if any, thumbs have.

I have a playlist of 77 songs, in which there are different 77 artists (from Spanish musicians like Sabina and Loquillo, to Beyonce, Rolling Stones, Judas Priest, et.) The radio from that playlist only has like 20 artists, and one out of every 5 or 6 songs is an Iron Maiden song, no matter how many times I thumb down their songs.

I thought Google Play Music radios were aweful, but they are miles better than what Spotify has.

Please give us back old radio station.

Over three years of premium using radio function exclusively i have lost a lot of my choices, I have no interest to pay for the premium to these conditions .