Shuffle is broken. Ignores recently added artists, or always buts them at the bottom of the list.

Windows 7 & Samsung A5 (and every other instance where Spotify exists)

Shuffle in playlists completely ignoring an artist, or always putting some artists in the end.

This error needs more than 1 or 2 sentences to explain, so I'll begin.

I added Rasputina to that playlist and thenattempted to play it with shuffle on.

The amount of songs related to artists are now as follows:

However... if I check the Play Queue where I can see the next upcoming 50 tracks I couldn't find Rasputina. At first I just thought it was bad luck with the shuffle algorith, so I shut Shuffle off and turned it on again to shuffle a new list. Same result.. all the songs were shuffled around, except that Rasputina still didn't appear.

This was redone well over 100 times with not a single track of Rasputina ever appearing... so I turned of Spotify, restarted my computer, andtried again. Same result. It was as if Rasputina never existed in the playlist at all, except if I turned shuffle off.

No matter how many times I reshuffled it always turned out the same result.

Rasputina did appear, but... ALL the First Aid Kit songs went first, and after that all the Rasputina songs came.. no matter how many times I shuffled and shuffled,, always First Aid Kit before Rasputina... ALL First Aid Kit that is.. nothing mixed... the only thing that shuffled around was the individual artists songs, but they never mixed with eachothers.

Tried it again with 4 artist.. 5 songs each... and this time it really tried to shuffle.. but 9/10 times it clumped the artists together.. 1/10 it managed to shuffle like 1-3 songs around in between the other artists... nothing more.

A fried of mine tried to reproduce this problem, and found the same thing...  He made a list with Adept and some other random songs and it always placed all the Adept songs at the top... after like 20-30 attempts it placed 1 Rasputina song in the middle of the Adept-clump and all the other random songs still left at the bottom.

Right now the only manual workaround I've found is to either manually shuffle the songs around and turn of the shuffle-function.. or sort it after songtitle or track-time or something.. with shuffle turned of ofcourse..... but that's not really a workaround.

As it is right now this function is clearly broken as seen by both me and several friends have noticed.

And... as you might notice this is not the typical "Uuuh my shuffle played the same artist 2 times in a row" complain. because, that could happen, and that doesn't bother me.

What bothers me is that an entire artist that by the way is the 2nd most songs in the list... is completely shunned by the shuffling.. after hundreds of resets, reinstalls of Spotify, restarts of computers, and so on.

Aaaaand this happens on the phone aswell!

(I've chosen to include my friends screenshot of his Adept-attempt. Worth noticing is that, while yes, 2 random songs in between a clump of 1 artist can ofcourse end up in the bottom... but... this is the result he got every single time. They ALWAYS ended up in the bottom, and it was ONLY the Adept songs that shuffled around.) 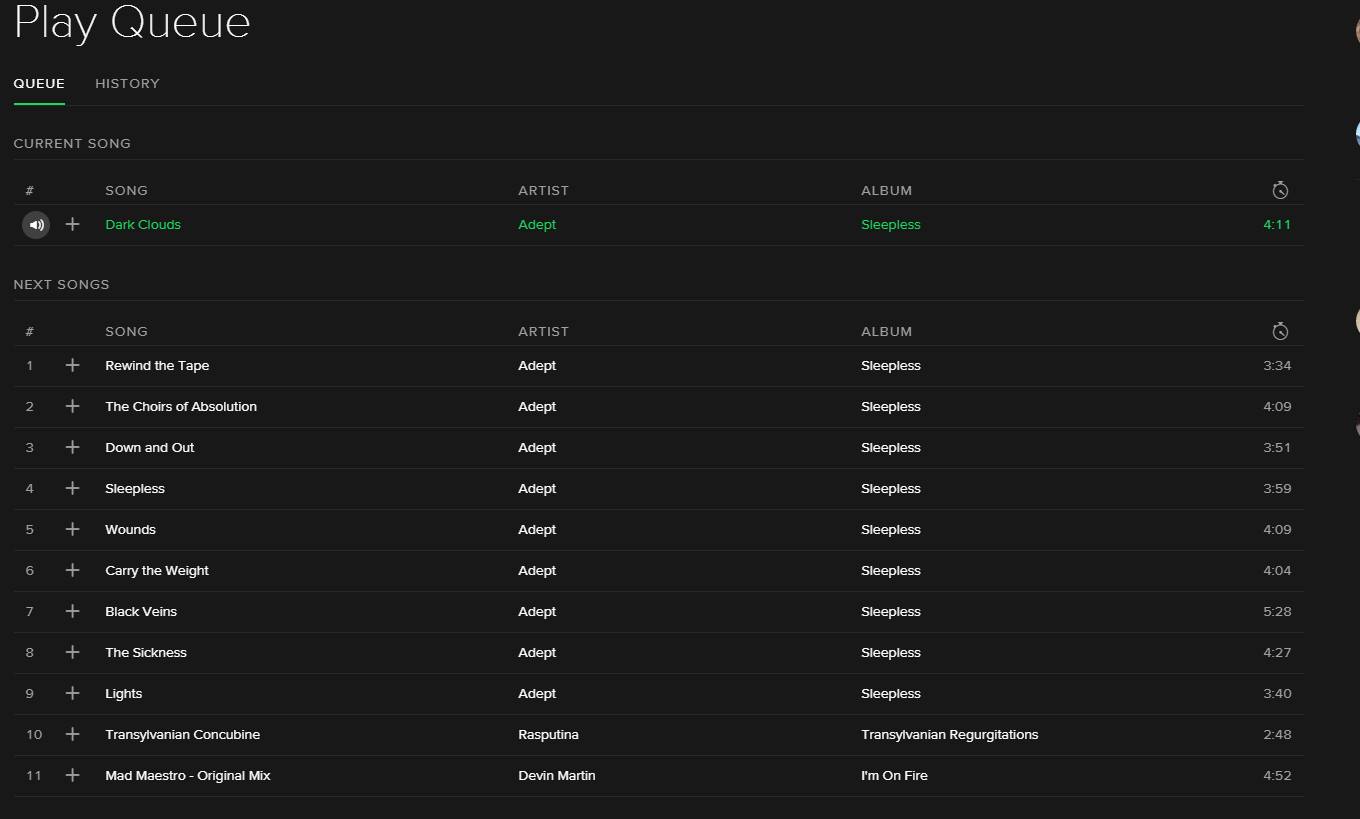 Thanks for your comments.

We’ve recently made some improvements to our shuffle algorithm. We’d love to hear your feedback here: https://community.spotify.com/t5/Implemented-Ideas/Implement-an-actual-shuffle-function/idi-p/27607.

In the meantime, we'll set this as closed but we'll continue to look into it.

I can add to this, i was the one that tested it with the adept playlist, and they songs always ended up at the bottom, but just swapped places occasionally, after playing something else and then going back to play through double-tapping the playlist, and shuffle again, the songs managed to get bumped up to the middle of the playlist, but the two non-adept songs were always next to eachother and never close to the top. This is extremely strange. I'm sure others have this problem as well.

Just create a playlist, put in one album or two from one artist and then throw in some other random songs, shuffle and look at the play queue.

Just to make sure, if you change the sorting setting on the playlist, does shuffle work better?

It gets a bit weird when I change the sorting. If I do change the sorting the shuffle and then looks at the Play Queue, then Rasputina is in the queue and it seems to be shuffled properly with all the artists, so that's great. A functional workaround, sorta.

However, if I do that, and then after that want to change the shuffle, and thus turn Shuffle off, and then on again to reshuffle..... Rasputina disappears again.

So it seems like the actual Shuffle button is broken in some kind of way, with the only possibility to actually properly shuffle right now seems to be to sort the playlist in different ways everytime.

So yay for workaround, a bit annoying thou, but atleast it's something until the Shuffle is properly fixed!

(So not resolved, just a kinda working'ish workaround)

I take that back.

The workaround only worked the first time, now it adds 1-5 Rasputina songs into the top'ish of the shuffle, aaaand after that they never appear in the list again just like before.

Thanks for your comments.

We’ve recently made some improvements to our shuffle algorithm. We’d love to hear your feedback here: https://community.spotify.com/t5/Implemented-Ideas/Implement-an-actual-shuffle-function/idi-p/27607.

In the meantime, we'll set this as closed but we'll continue to look into it.

This should not be closed. I am experiencing the same problem a year later, is there a fix for this yet?

I'm also experiencing this problem. Shuffle is excluding whole artists and placing all of their tracks at the END of a playlist. Why is this happening? Do we have any sort of resolution?

Also, reordering the playlist doesn't work. Shuffle still ignores one whole artist and puts all their tracks at the end. Seriously guys, this is infuriating and so silly. Why is this still an issue?

it's been over a year and the problem still persists.

I've suddenly started getting the exact same problem, the three artists I've most recently added to playlists won't play on shuffle in any of them.