Whenever I shuffle play an artist, tracks are constantly duplicated. I'm not sure when this problem appeared, but it's been within the last month or two. I've read some other answers (eg this one) that seem to suggest it's a known issue (ie Spotify has broken and is adding popular songs to the full playlist). However, I haven't seen anything that talks about how pernicious this problem is. I was able to play an artist, shuffle the tracks, encounter a double, unshuffle, and repeat (scroll down to see this visually). If that's the intended behavior that makes absolutely no sense.

I threw together a quick video to illustrate the issue. Swapping from shuffle to plain and back consistently shows the same broken behavior.

We really appreciate all your reports regarding this!

We've passed on all this info to the right teams and they're looking into this.

Keep in mind that while we don't have an exact timeline for a fix, we'd suggest keeping an eye out for updates in the app by enabling automatic updates.

We'll make sure to let you know here in this thread if we have further updates for you.

Thanks for reaching out. Welcome to the community!

This can happen if you're trying to shuffle songs from an artist with a low number of tracks on Spotify. As the app is trying to create a reasonably sized queue for you to listen to, it may duplicate some of the songs. But rest assured, Spotify is working on improving this.

Let me know if you have any questions. Have a great day 🙂

I've got the same problem and it's not a "sometimes" issue. Based on the forum people have been showing constant duplicates with artists with low-ish song counts.

We're not talking occasional duplicates. With bands like Crumb, Middle Kids, Swimming Tapes, or Kera and the Lesbians 80+% of the time the song is a duplicate when shuffled. It's not a "may duplicate some of the songs" issue - something is absolutely broken with the shuffle algorithm for low song counts.

I understand occasional duplicates, but something else is funky here. It seems this is not an isolated incident either. 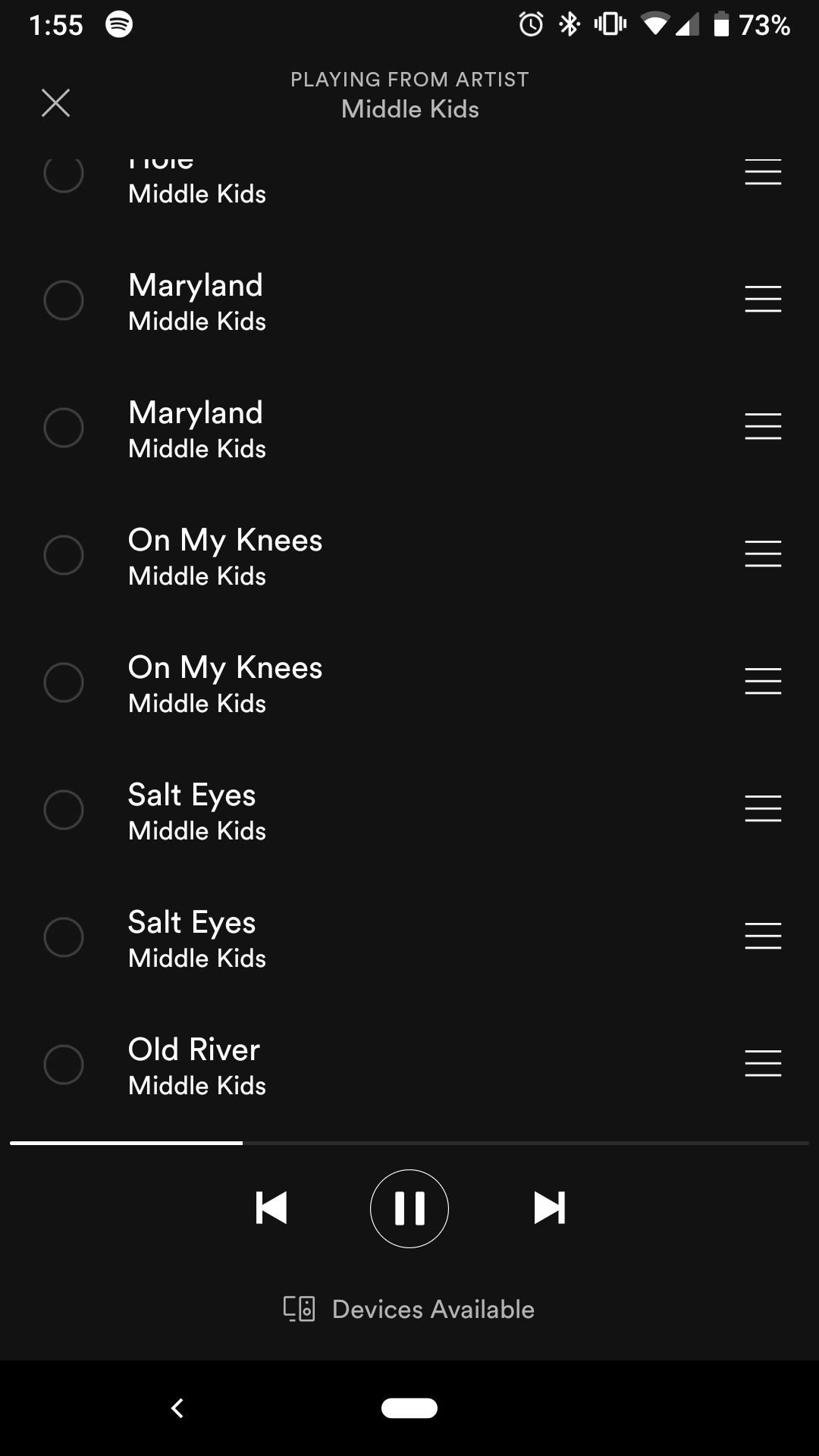 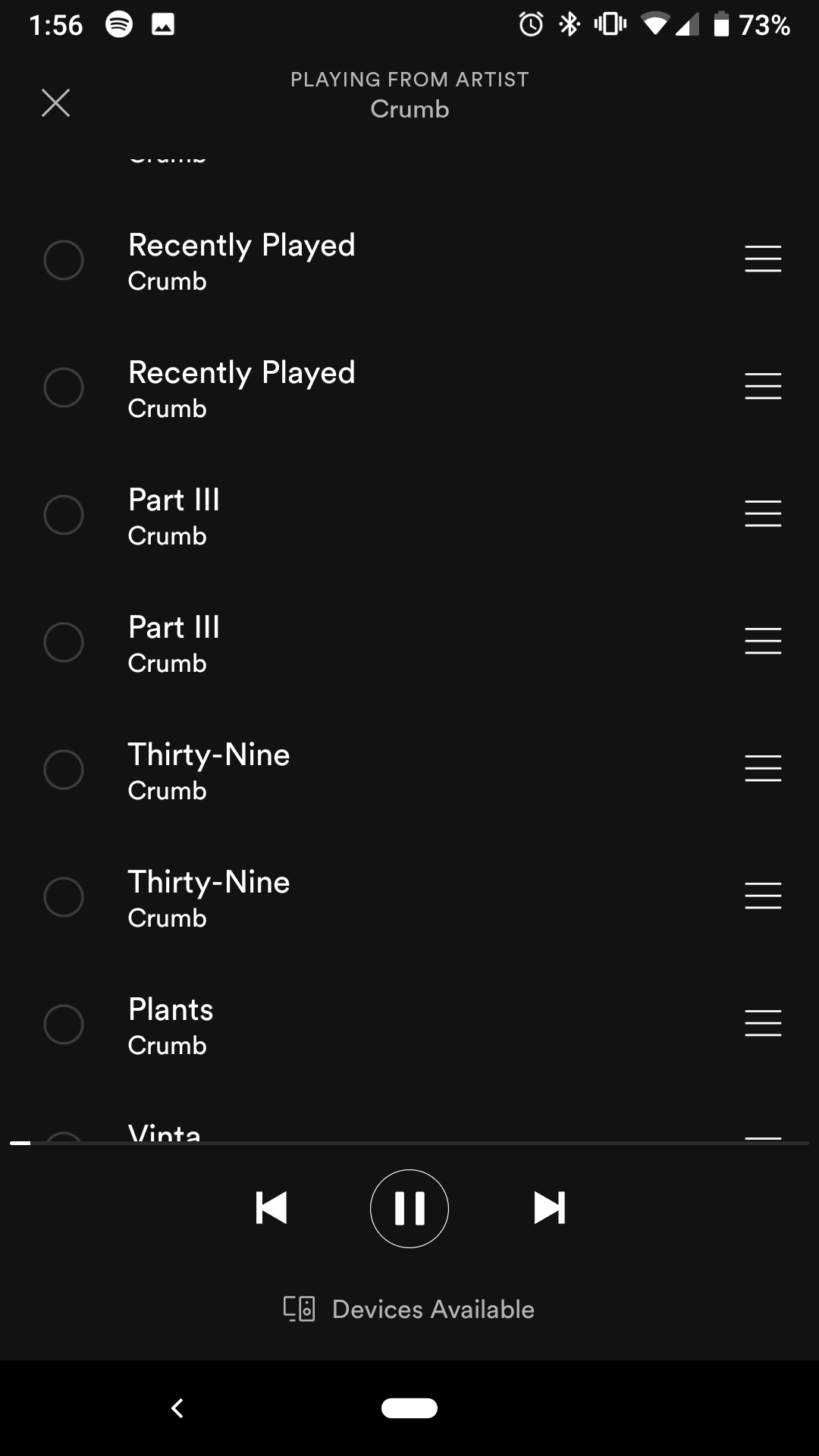 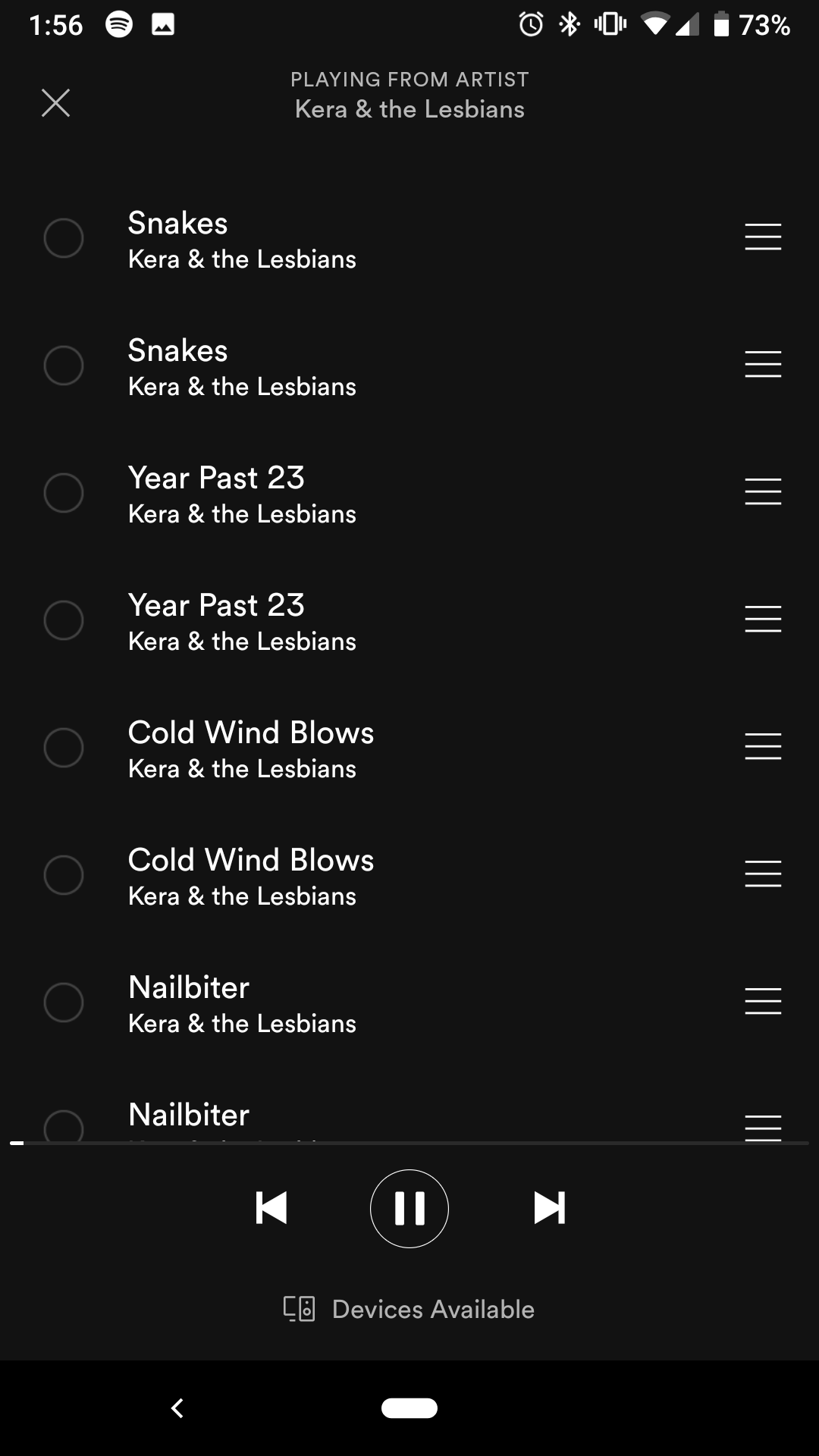 Thanks for reaching out. Welcome to the community!

The thing with many of these artists is that they have albums, and then they have singles with the same song that can be found in the album. You can check this if you play one song, then press the song title to see where it leads (album or single), and then when the next "duplicated" song comes, press that song title and you should see that it leads to another place (album or single). This behaviour tends to become more evident when the tracks are in the popular songs section of the artist as well. This is how shuffle works right now, but Spotify is working on improving this.

Let me know if you have any questions. Have a great day 🙂

I also encounter this issue on literally every artist every time I want to shuffle play all there songs and it's frickin frustrating. And there is no way that this is due to the songs being uploaded multiple times. Because first of all, this also happens with songs that appear only once in the discography (eg Overseer in the attached screenshot), and even if there multiple versions of them, the chance of all of them constantly getting queued in pairs is just waaaaay too small to be considered a possibility. This is 100% a bug! And not a nice one.

Also, I tried to do what Noah suggested and encountered either a different bug or a different symptom of the same bug. I clicked on shuffle play on an artists page, checked the queue for duplicates, clicked on the first song to play it and then clicked on the title to check where the song is from (was from a regular album). Then I went back to the queue to check the second song of the duplicates, but clicking on it didn't actually start the next song but rather restarted the one that was currently playing. So the second song was still the first in the queue.

Thanks for the add Jarvick. I agree it is with tracks that only appear once in their discography.

It's also not isolated to very low track artists. I'm having the same issue (though slightly less) with unknown mortal orchestra, an artist with over 60 songs in their discog. The repeats are from the same album, not the single/album version

Can we get this flagged as a bug?

Hi, I also have this problem.

It appears when I'm using spotify from mobile, I go to any artis and, when I select any song from the 5 featured and I have the shuffle actived, alot of them are repeated two or three times.

I attach 2 images although it seems like it's only one playlist, but no. 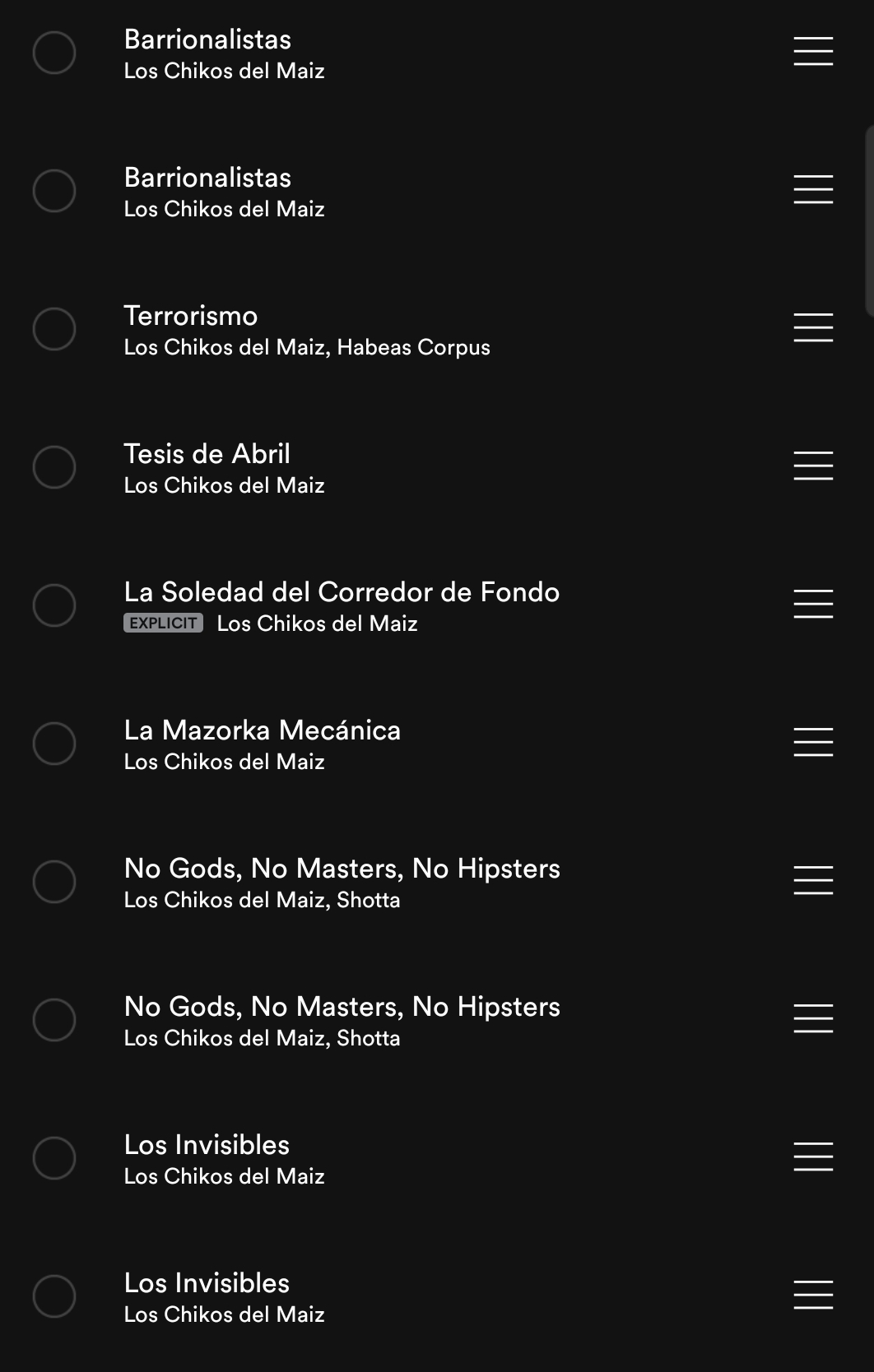 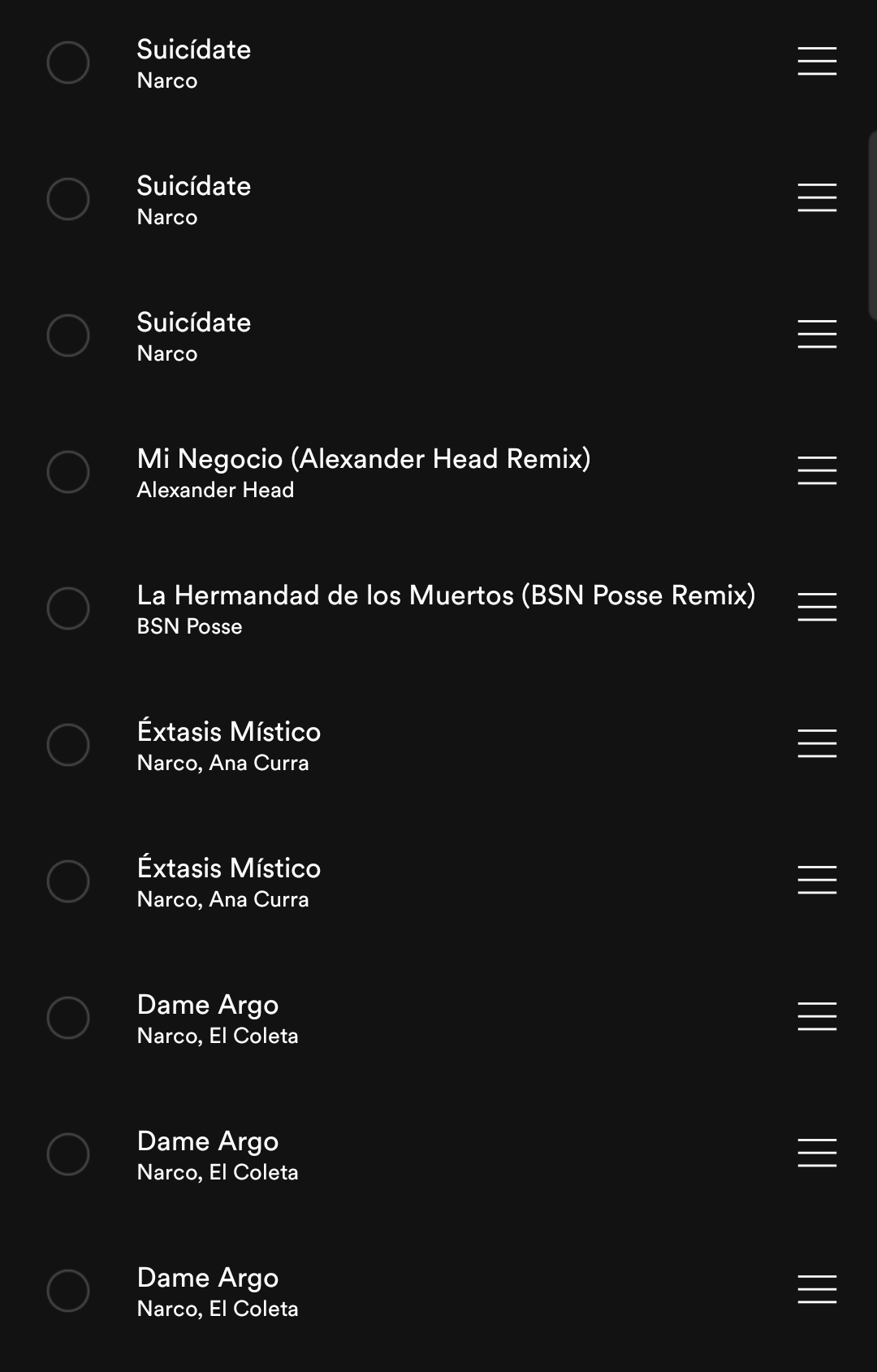 I agree this seems to be a bug as it's developed recently and the duplicated songs appear in consecutive pairs.

This is something that I've brought up before but was ignored as "expected behavior" when it is clearly not. (see https://community.spotify.com/t5/Android/Shuffling-an-artist-constantly-duplicates-tracks/m-p/474961...)

As attached, shuffling an artist doubles up on songs constantly, which is unacceptable behavior for shuffle.

Note that these repeats are not 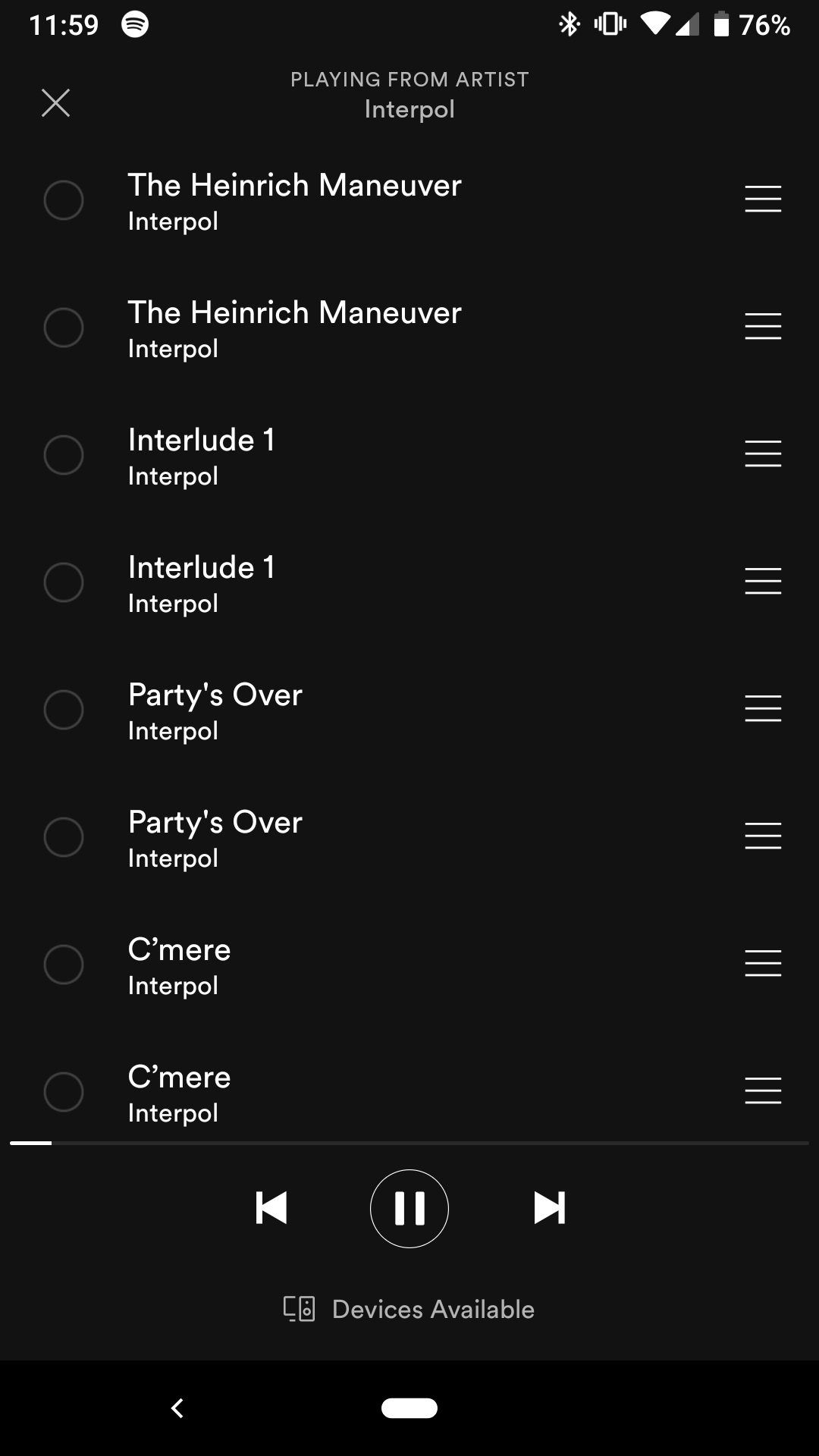 Created another thread because of the inadequate response to this one.

Hey @jaycmiley thanks for reaching out to the Spotify Community,

I would actually recommend doing a clean reinstall on your device. It might also be beneficial if you can restart your device, although it sounds simple, it can help from time to time.

Finally, if none of those work try clearing your cache and data by following these steps:

Step 1: Head to the Settings menu.
Step 2: Find Apps (or Applications, depending on your device) in the menu, then locate the app that you want to clear the cache or data for.
Step 3: Tap on Storage and the buttons for clearing the cache and app data will become available.

Here is a video to help with that.

Let me know how it goes,