There's something pretty alarming going on right now with Spotify Free. This started a several hours ago. If you have Spotify Free open, it will launch - and keep on launching - the default internet browser on the computer to different kinds of malware / virus sites. Some of them do not even require user action to be able to cause harm.

I have 3 different systems (computers) which are all clean and they are all doing this, all via Spotify - I am thinking it's the Ads in Spotify Free. I hope this has been noticed and Spotify staff are fixing it - fast. But it's still puzzling something like this can actually happen.

From what I have read so far I have understood this issue has been happening with Spotify Free before. Nevertheless, it's really dangerous for users and amazing how it has not been fixed. These malware launches probably happen during showing certain ads but malware / virus sites have nothing to do with the advertisers. Tells how big of a problem it seems to be (hacked server, spotify admin accounts etc)...

We've identified an issue where a small number of users were experiencing a problem with questionable website pop-ups in their default browsers as a result of an isolated issue with an ad on our Free tier. We have now identified the source of the problem and have shut it down. We will continue to monitor the situation. If you see this issue again, please let us know the exact date and time in this thread.

Thanks as always for bringing your reports to the Community!

Thanks for that info.

@illoria, we had a little trouble opening the link. No worries though, can you let us know what Spotify/OS version you're rocking?

@eetuholopainen and @OssiKultalahti, are you still having issues? Also, does the app get unresponsive after the ad?

@luhlibeatzz, that's great to hear. Did you do anything odd for it to work? It'd be super helpful if you could give us some info regarding that 🙂

2. You mean whether the ad is always the same? It opens the same ad every few minutes, but if I relogin, then it starts opening different one. So it changes between sessions. The pages have long URLs (just like the yu0123456 one) and a lot of redirects before landing on something, usually promoting some browser plugins I've never heard of.

Hey this just happened to me for the first time, too.

I do not know if it is a coincidence, but it happened soon after I clicked on a playlist with a strange name: "z+jh */".

Even more strange is that this playlist is among the ones I'm following, but I do not remember I ever selected it. I know the music it contains, though, so maybe it had a different name before.

Anyway, I just clicked on it and was looking at it - not even listening - when a couple of ad tabs opened in Chrome. The tab name showed something like "pop-under ad...". I cannot tell which ads were they because I closed them immediately.

Another two opened some minutes later, closed again by me.

I suspected Spotify because I didn't have anything else special open, apart from my usual apps and web pages. And I was indeed using Spotify in that moment.

Then I started having issues with the internet connection, again it seems strange this can be related, but you asked if Spotify started being unresponsive... It actually lost connectivity, but also other apps on my Mac did it. I quitted and then restarted Spotify, and now everything is working fine.

Yeah still having problems. Spotify doesnt get unresponsive after the ad

Yeah, the "pop-under ads" are back as of today. They stopped appearing for a couple days, like other users said. No harm done, but they're kinda suspicious-looking sites. I only now realized it was linked to Spotify, earlier I thought I had an infection in my computer, so tried with practically every scanner and disabled browser add-ons. Now I started Spotify and the ads are back opening randomly.

I am having this issue since a few weeks now. Spotify keeps opening ads in my web browser every 5-10 or so minutes. After I close spotify the pop-under ads stop.

If the representatives have no real answer to this, I take it this is their new way of monetizing users which is completely unacceptable, in which case it would be time to move onto other services.

1. OS X
Spotify version 1.0.38.171.g5e1cd7b2
This version of Spotify had not shown this problem before (unless Spotify has started to auto-update without my permission).
Browser: Chrome.

2. The ads only open if Spotify is open and open every few minutes. Without Spotify running, the problem never appears.
Ad opened differs. Once it was bet365.com after a redirect url. Another time it was a less "legit" site. I don't remember the sites opened the other times because I killed the tabs as soon as they opened. The ad opened seem to differ from the ad displayed in the player - the ad displayed in the player when this happens seems to vary and be legitimate ads, e.g. Svedbergs (Swedish manufacturing company) was showing before and after the Bet365 ad opened. The currently displayed ad had been showing for a few seconds before this happened.

http://appless.store/mk/indexse.php?s=244519388
Which popups this dialog with fake info (in incorrect Swedish that I've translated to "correct" English for you here):
"appless.store says:

Last time you visited the web you received a trojan virus that has infected your Mac.

(Edited to provide more information)
Also having this issue. I'm from Canada.

Not the most helpful input, sorry, just wanted to throw some extra attention on the issue.

At first I thought some browser-extension went crazy, but it also opens when the browser isn't open and spotify is running.

/edit: got another one while a banner with "Ads by REVERBNATION" was shown, just like before

Having the same problem with the pop under ads

2. The ad that appeared in the spotify player when it occured should be shown below 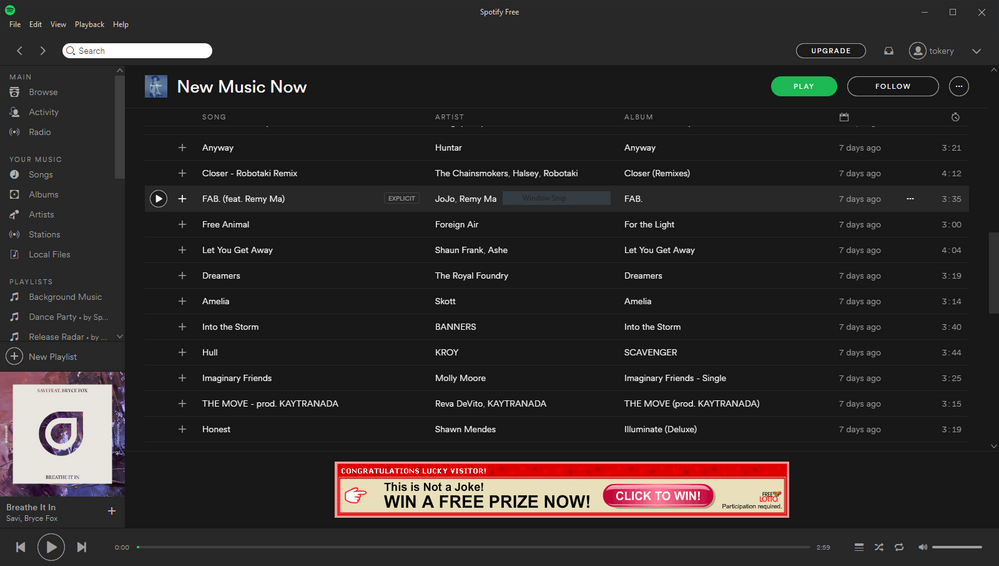 No events occured in the last few days that could have caused this problem.

Seems to open ads through the default web browser; in my case Microsoft Edge.

Anti-virus found nothing, never clicked the ad in spotify