Status: Fixed
Submitted by dustler27 on ‎2016-09-04 02:40 AM
Options
My spotify just started doing this last week. For months and months and months I've had no problems whatsoever. Then all of a sudden the songs stop after an ad and won't resume. Have to shutdown spotify and open back up. Then repeat every 10 minutes. I've uninstalled and reinstalled but with no luck. Annoying. I love spotify but as of now it's closed.

Sorry for the delay, and thanks for sending that info over.

We passed it on to our tech folks who have now fixed the issue. If you're still experiencing any hiccups, make sure you're using the lastest Spotify version by following the steps here: https://support.spotify.com/learn-more/faq/#!/article/reinstallation-of-spotify/.

After playing a specific ad, spotify pauses itself. Pressing play would restart the ad, and pressing it again will pause it, and any other button won't do anything. A message will show up once the ad has finnished by first time, stating that "it's not possible to play the current song" (you can see it in the attached picture). This happens everytime that ad plays.

Trying to play another song or list won't work either, as Spotify is playing an ad.

After some time, like 30 or 40 minutes, the music will start playing again, but the play button, as well and next, prev and the timeline, will still work as if it was playing the ad, so pressing play will start playing the ad (on top of the music), and the other options won't work. Other ads will also play with the music, as if there was another instance of Spotify running in background (thought Spotify itself prevents this from happening).

The ad which causes this bug is labeled as "Spotify" by "Spotify", and consist on some music and a video asking me to buy premium. The text shown in the video is written in english, while most ads I find are fully translated to spanish (though some others are also in english). There aren't any voices in the ad itself.

I just noted that the little buttons on the minimized version of spotify (the ones that appear when you put the mouse over the taskbar icon in a small window) don't work either. I can only click the play button, but that doesn't even restart the ad.

It's really annoying, as this ad shows up every 3-4 songs.

Close Spotify and open it again, and hope the ad will take longer to show up.

Alternatively, wait until music plays by itself again (30 minutes or so) and forget about the pause, next or previous buttons, as well as timeline.

I use Spotify in spanish. I don't know if that has something to do with the issue, but as the troubling ad is in english and most other ads show up in a translated version, I thought it may be relevant.

In the attachment you can see the troubling ad while some music is playing. I included the built-in window's sound equalizer in the screenshot so you can see there is sound actually playing, an that it's the song marked as playing in the playlist. The timeline shown is the one for the paused ad, so there's literally no way to control the music unless I close the program. Clicking in the playlist just makes Spotify ask me to wait while the ad is playing.

Also, I'm sorry for any spelling and/or expression mistakes I may had while writting this. I tried to find an official spanish forum for troubleshooting in Spotify, but couldn't find any. 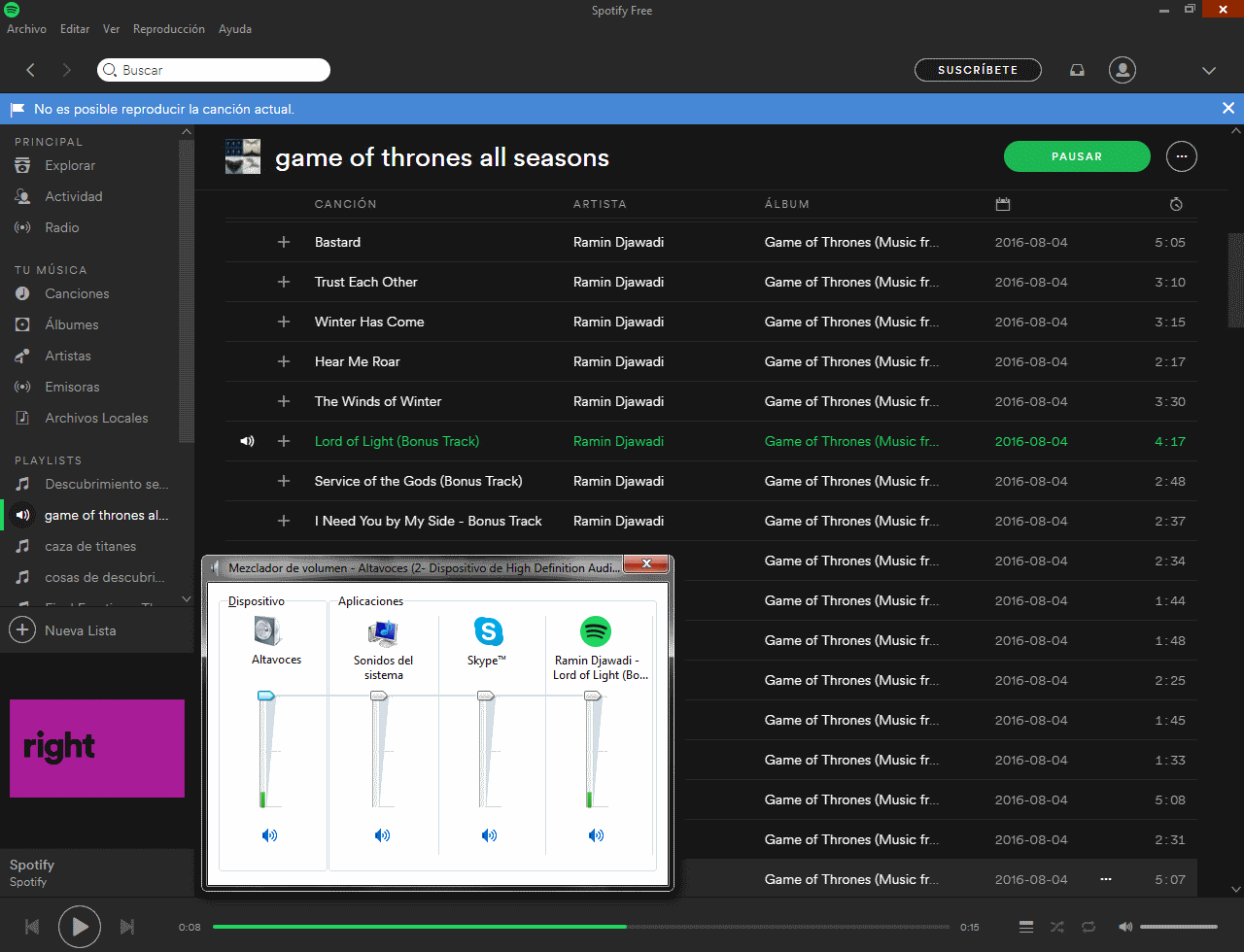 Happening multiple times, while having a choppy internet connection.

Right to the progress bar, the message "Infinity:NaN" is shown.

When every an ad for Spotify Premium runs, Spotify stops playing music and will not continue on.  When I chouse a different song or playlist, the Spotify program tells me that the as has to play through before the next song will play.  I press play on the ad, but it does not play any music, even the songs that i have selected after the conclution of the Spotify premium ad.

Welcome to Spotify Community and thanks for the heads up!
If you could confirm the following I can keep investigating:

I am having this exact same issue, i have been having it for a few days now, how can this issue be resolved, i really love using spotify, i don't mind the ads but it will not continue after the ad for the premium upgrade and a few other ads it stops as well too

i have a desktop pc

it is running windows 10

also tried the clean reinstall yet still having the same issue

Spotify, what is the real fix?

Yes, this similar thing has been going on with my Spotify (free desktop version) for a couple of weeks now.  Gets stuck on an ad.  All you can do is play the ad again but won't go back to playing the music.  Best fix is to reboot Spotify.

Hey @Dabra, welcome to the Community!

Thanks for reporting it. Our technical team is currently looking into this.

Hey @Ryuha16, welcome to the Community!

Thanks for reporting this. Our technical team is currently looking into it.