Description: The iOS app drains the battery far too quickly! Even with offline playlists, flight mode enabled and no background app refresh, my phone will still die completely from 100% after 5-6 hours of listening and that's if I use no other apps. My iPhone 6 is brand new! In the battery usage Spotify is always ranked as the most draining app and generally shows something around 50% (unless I use any other battery-intensive apps, the lowest I've seen it drop is around 30% - still far too much). My phone never lasts a full day, without Spotify running it's fine! On iOS 9.0.2 I used to easily get around 10 hours from my year-old 5s with exactly the same usage (also now dies after 6 hours). It's shockingly bad but I dislike all other streaming services.

1. Play any music (including offline playlists) 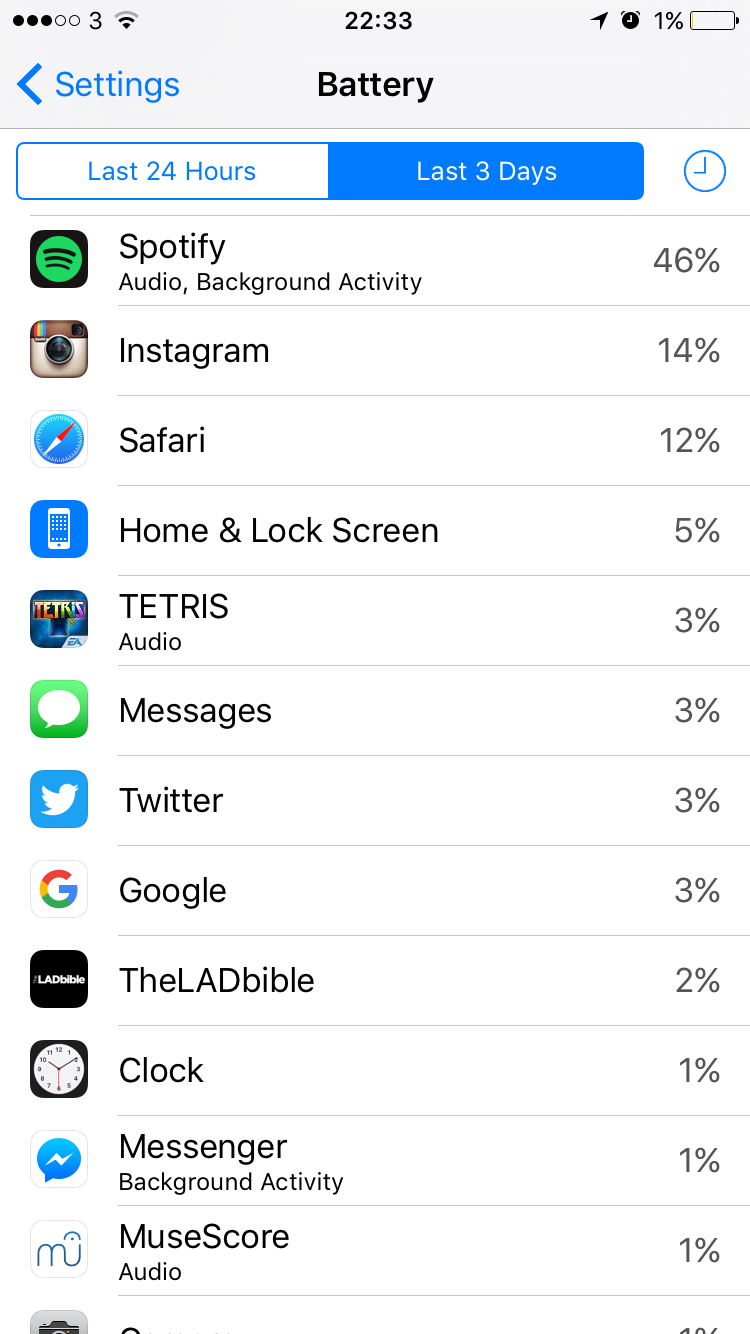 gnovella16
Roadie
Status changed to: Not An Issue

chris951021
Newbie
I'm having the same problem and I'm running on iOS 9 .2 with an iPhone 5 is this being fixed As so far as the workaround on Spotify
0 Likes

I've reinstalled the app more times than I can remember. I've tried offline music, online music, EQ off, normalisation off, feedback sounds off (all in sequence) and background app refresh is also turned off for Spotify - none of those have made a difference. Also, I've reset my iPhone around 3 times (back to factory settings each time) and I've tried installing a previous version of the app that I had in iTunes. I've also tried logging in with my device password instead of via Facebook.

NONE OF THESE WORK!

As regards the "not leaving it running in the background" suggestion, how else am I supposed to listen to Spotify? Personally, I believe it's an issue that lies with iOS 9.1+, I always used to easily get 10 hours from my old iPhone 5s when it was running (jailbroken) 9.0.2 and I had exactly the same usage pattern as I do now.

The Mac app had appalling battery usage until some recent updates fixed the issue, I refuse to believe that my usage pattern is to blame. Whether it's lazy coding or bad integration with the OS, something is clearly wrong with the Spotify app - the iOS music app used around 5% of my battery in the same amount of the time that Spotify would chow through 30% (and that's in flight mode).

How can you justify this?!

Dangrove98
Regular
I don't recall having the same issues with 9.0.2, there's been several Spotify updates recently but none of them have fixed it. Oddly, I've noticed that playing Spotify *to* my phone from my laptop via Spotify Connect whilst it's locked etc means the battery will drain MUCH slower. No, I have no idea why this works either and it's essentially useless seeing as everyone tends to use Spotify on the move. But there are ways the app can not drain battery
0 Likes

I will join the group , spotify consumes the biggest percentage of battery than any other app. And that with only 1 hour of usage per day.

Dangrove98
Regular
I've submitted a bug report to Apple as well, I think from iOS 9.1 onwards it's simply unbearable
0 Likes

50% usage of my batery in brand new iPhone 6S is Spotify with Premium subscription.