We’ve received some reports that newly added Local Files aren’t syncing with the phone and either do not show up at all in the playlist or even if they do appear to be correctly downloaded they still don't play.

We can confirm the right team is aware of this and is looking into it. If you’re experiencing this issue, make sure to follow the instructions in the Status Update below, add your +VOTE and subscribe to this thread so that you'll be notified as soon as there are any updates.

Thanks for reporting this and providing us all the relevant info.

We've passed your details on to our developers and they have already rolled out a fix to improve the experience reported.

We are aware that some users still have trouble syncing their local files with their iPhones, but this seems to be affecting specific devices or setups and requires individual troubleshooting - It'd be great to follow the steps you'll find here under Didn’t work?

We’d also recommend you try a clean reinstall, which will remove any corrupt data from your device. Just a heads-up, this will remove all your downloads and you'll have to download everything again.

If that doesn’t do the trick, you can post in the relevant help board and we’ll see if we can think up some other things to try.

Same issue here, adding local files to a playlist breaks it on mobile.

Same issue for me, just started recently. I've had lots of syncing problems but I've always been able to solve them as I'm a Software Dev and have lots of troubleshooting experience, I strongly suspect a recent update of spotify is causing this.

I'll just follow this up with saying that I have done a clean reinstall on both devices, but the main issue seems to be the desktop is simply not updating playlist contents. I have some songs that are grayed out on the web client and mobile and I have the setting to "hide unplayable songs" off, but despite adding local files to my desktop version of spotify I do not even get the grayed out version of songs on either the web player or mobile so it doesn't seem to be an issue of syncing known content, but rather that spotify can recognize when I make new playlists but cannot recognize the addition of songs to it on desktop.

@spotify get to fixing this issue please!

its clearly not user error! so many people experiencing this at one time? spotify fix your app! this is very frustrating!!!

Thanks for all your reports so far!

Just to double-check you haven't missed out a step that might fix the issue, could you make sure that you have:

If all of the above checks out but the local files remain unplayable on your phone, it'd be great if you could share with us the following details:

We're eager to get this sorted out quickly, so we'll be looking forward to your replies 🙂

Troubleshooting steps done: Try to add new local files to an own created playlist on desktop --> Files show up on playlist only on Desktop Spotify but won't show up on the phone at all. @Xenia

This problem seems to be mostly fixed for me as of this morning. But I'll include info below so that you can diagnose in case there's still any long-term problem.

Just for the record, this was NOT exactly an issue of local files not sync'ing (at least not for me). In fact, local files that were ALREADY in playlists seemed capable of sync'ing fine (though they seemed to be disappearing occasionally). Rather, the issue was that if I ADDED a local song to a playlist, the ability of that playlist to sync broke ENTIRELY (not just for that single song).

For example, I had tried experiments like this on my computer:

After this, the playlist would show up with 6 songs and a changed name on my computer, as expected. BUT my phone would still only show the first 2 songs, and would NOT reflect either the 1 local file OR the subsequent 3 songs (or even the playlist name change). So I don't think that the troubleshooting steps for just local file sync'ing would help, though I tried those too.

To answer your question: I tried all the troubleshooting suggestions there, have the latest version of Spotify on both my phone and my computer, and tried multiple clean reinstalls.

The screenshots below (taken yesterday) show an example discrepancy. Note there are 6 songs in one screenshot and only 4 in the other. Song #5 was the only local file, and the other five songs are from the Spotify library. 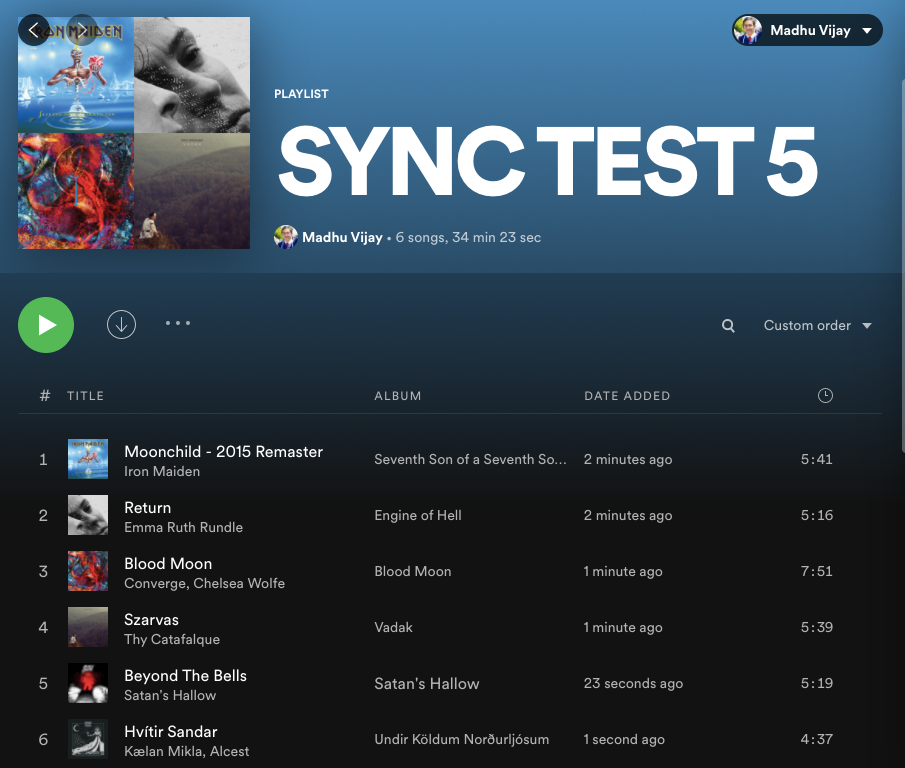 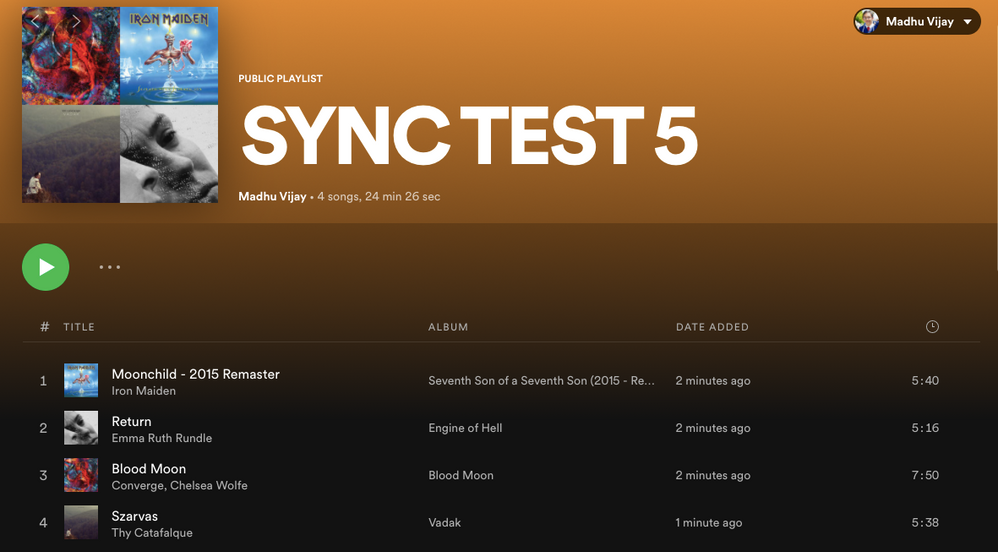 Web player (my phone looked identical to this)

Our tech teams have done their magic backstage and local files should now be able to be added to playlists again without issues. Any files already added should start syncing automatically - If they don't, try restarting your phone and the app to give it a refresh.

Please confirm if this has been resolved for you with a quick post.

If the issue persists, it’d be great if you could tell us the exact Spotify version you are currently on as well as make and model of the affected devices.

Working for me again since last night. Thanks Xenia