I just got done watching the Netflix show "Tiger King", which features its protagonist - Joe Exotic's - own country songs. I liked a few of them and searched them up on Spotify, only to find a profile with his exact name. Thinking it was him, I went into his profile, and saw en EP titled Tiger King, released in 2020. This would not be possible for the real Joe Exotic, as he's in prison. When I actually listened to it, it was just music based on the show, not written or endorsed by Joe Exotic. However, all of his content features pictures and other trademarks related to Joe Exotic (his songs are even written from his perspective, but I can't hold that against him).

I take issue with this, because it would seem this artist is piggybacking off the success of the Netflix show and impersonating Joe Exotic for profit, or perhaps clout. Can something be done about this? I imagine many other viewers like me would be interested in listening to Joe's music on Spotify, but have stumbled upon this issue as well, and been as disappointed and upset as I am. 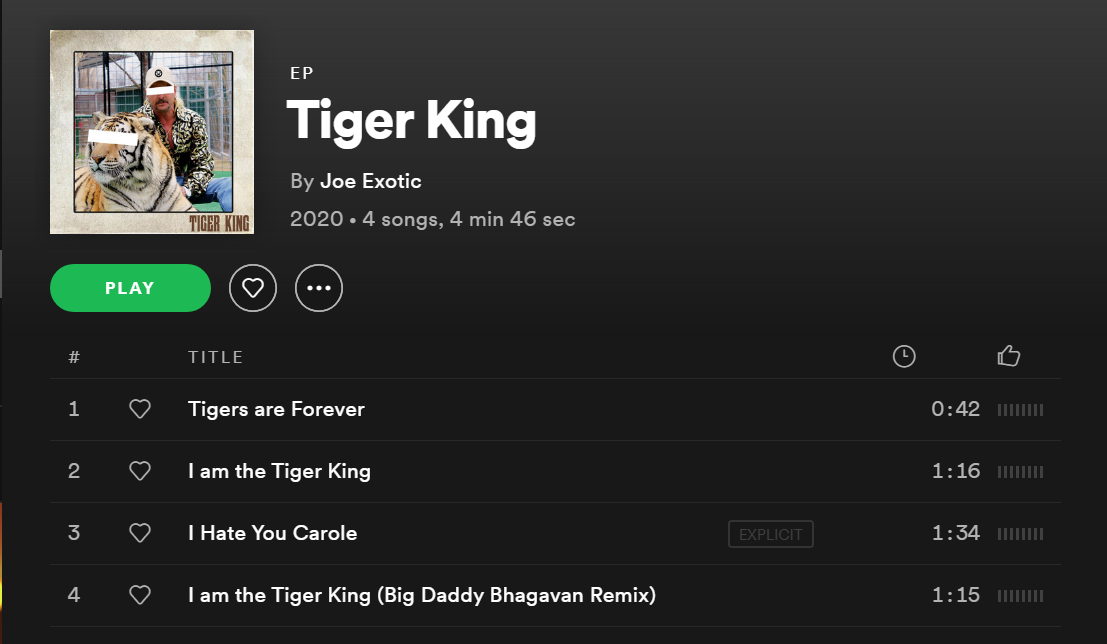 If you notice a track or an album on Spotify isn't playing correctly, or the information (title, cover art, release date) is incorrect, you can report it to us.

We suggest you check out this help page and follow the steps on how to report the issue you've spotted.

IvanModerator
Help others find this answer and click "Accept as Solution".
If you appreciate my answer, maybe give me a Like.
“Music is the strongest form of magic.” Marilyn Manson
Reply
0 Likes
Highlighted

draculasacular
Casual Listener
Hello Ivan,
That doesn't really solve my problem. This is not exactly a content error as much as a copyright infringement, or an impersonation issue.