When I enter open.spotify.com (or play.spotify.com, which redirects me to "open"), there is no web player displayed. Instead of it, there are some tiles and "Show on Spotify" or "Play on Spotify" messages leading to open the desktop app (which I don't even have installed).

It's a Linux desktop computer. I'm using Spotify Premium -- although I don't know why since I can't play anything :-).

The screenshot contains the screen which appears instead of the player (says "Display on Spotify and "Discover new playlists for every mood and occasion"). 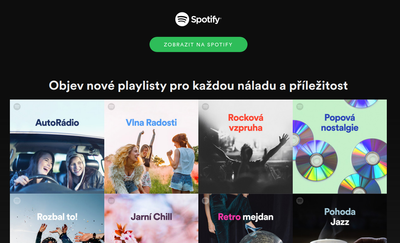 Re: Can't open web player (there's some dummy page instead)

Firedingo
Visitor
Having the same issue but also having issues with Firefox.
Reply
0 Likes
Highlighted

Re: Can't open web player (there's some dummy page instead)

Please, take a look at this ongoing issue.

If that's something you're experiencing, make sure to add your +VOTE there and provide all the information needed. Don't forget to subscribe to the topic as well. That way you'll be notified with all the future updates on that case.

Emilia_8Rock Star 8
Help others find this answer and click "Accept as Solution".
If you appreciate my answer, maybe give me a Like.
Note: I'm not a Spotify employee.
Reply
0 Likes
SUGGESTED POSTS