I have a Bose SoundTouch which I can control from my iPhone or iPad using its SoundTouch app. I’ve never had an issue until a few days ago. Whenever I select a song, it just stays on the blue screen and nothing happens. No sounds, no information of the song or artist. Just blue. It’s the only music service that doesn’t work and Bose customer service says it’s 100% a Spotify issue. I’ve done most of the obvious troubleshooting so far (reset, sign out/in, reinstall, etc...). Does anyone have any suggestions? Thank you in advance!

santeri
Music Fan
Hey, thanks for the education! We've changed it to 255.

MoRiley50
Casual Listener
We FINALLY fixed ours by taking our pool O/S off of WiFi and hardwiring it
to the router. The pool O/S (Hayward OmniLogic) seemed to be interfering
with the other systems trying to use WiFi.

I recently created a thread with exactly the same problem, soundtouch has dissapeared from the connect list. Now I read you have a 10 and a 20, the 20 is missing but the 10 is still there? Interesting, as my problem concerns the 2 soundtouch 10's I have. Am considering removing them from my WLAN/WIFI and reintroducing hem to the network. This is a recent problem, about a week ago i noticed they were missing.

Have you tried anything to fix this yet?

Veemaxt
Regular
Sorted. I just had to unplug my bose speakers from the main electrics. Once rebooted they were in the list. I am sure my router is messing about and doing something to mess up the wifi settings.

fringeman
Newbie
Thanks mate! I’ve had same issue and it was solved due to your advice.
Reply
1 Like

MoRiley50
Casual Listener
I found that solution online and glad that it finally worked out. I have a
feeling that I’ll need to do that every once in awhile.
Glad it worked for you, too.
Mo

Thank you for reaching out about this here in the Community.

What you've mentioned was reported here and should be fixed now. Could you give it another try and let us know how it goes?

MarioModerator
Help others find this answer and click "Accept as Solution".
If you appreciate my answer, maybe give me a Like.
"There's more to living than only surviving." - Dexter Holland
Reply
0 Likes

I know it doesn't explain why (some) others have gotten their connection to work and some not. But I've had these issues on and off in the past as well. And now I decided to do some troubleshooting of it, and I think I may have found an issue which probably affects more people that just myself. (And I should perhaps mention that I work as a networking professional and have specialized in WiFi specifically the past 16 or so years (and with that comes a lot of LAN and IP network troubleshooting which is more generic.)
The problem I've found is that when the Spotify app (I'm running iOS 13.3.1 on an iPhone 😎 does a search for the speaker(s) it sends a multicast DNS request on the local LAN to address 224.0.0.251 on UDP port 5353 (multicast DNS, mDNS) asking for _spotify-connect._tcp.local
However, it does so with an IP TTL of only 1. And though the thought behind doing so (which most likely is to limit it to only the local subnet), is good, it overlooks the real meaning of the IP TTL and what the RFC for Internet Protocol says.
The problem arrises in certain networking devices which are having different smart mechanisms to deal with mDNS (aka Bonjour). In my case I have access points from Aerohive Networks, which are enterprise class access points with something they call a “Bonjour Gateway” which is meant do help intelligently re-advertise certain select services across VLANs, based on configurable policy. However, even if not doing any re-advertising they still inspect the IP header (even in bridge mode) to inspect and decide if there is a Bonjour Gateway policy that requires them to do something. This inspection does, in accordance with RFC 791 (Internet Protocol, IP) require them to decrease the TTL before forwarding since they “process the IP header”. (It says about the Time-to-live field: “This field is modified in internet header processing.” and “If the field contains the value zero, then the datagram must be destroyed” (which is what happens before forwarding the packet).
The limitation to advertise only on the local subnet is dealt with through the destination IP address, which falls in the 224.0.0.0/24 subnet, which according to RFC 5771 disallows the traffic to be forwarded off-link (the local link network). Further more, it’s worth noting that mDNS queries issued by Apple apps have an IP TTL of 255 (AirPrint, Airplay etc) and searches for Google Chromecast (not sure what piece of software triggers it in my case, but I see it in my wireless packet capture from my iPhone) has an IP TTL of 2. The ONLY queries observed with an IP TTL of 1 are those for Spotify Connect.
I have also generated my own traffic to test my theory, and whenever I generate traffic to 224.0.0.251 with UDP port 5353 and IP TTL of 1 it does not get repeated out in the BSSID by the AP, but if I change the destination IP or the UDP port it does (which indicates that it’s the Bonjour Gateway functionality specifically). Also, if I change the IP TTL to 2 with the same test method, it get repeated (even if the payload is rubbish).
I think that Aerohive are not the only ones that do mDNS inspection, and therefore I suspect that more people are hit by this without even knowing that they have such a feature.
So in conclusion: If Spotify developers could just increase the IP TTL for these Spotify Connect discovery datagrams to 2 (or why not just do like Apple and set it to 255? (as explained above, the IP TTL is _not_ the way to limit traffic propagation to link local network only) this would likely eliminate the problem for at least some of the users.

santeri
Music Fan
Hey, thanks for the education! We've changed it to 255.

Thanks for the feedback. In what build/version for iOS should I expect to see this change?

I can confirm that it has not been fixed. This issue is still active and is afectinc my ST30 and ST10

Lenskie
Regular
Pls look into ths.. Been having ths
For months.
Reply
0 Likes 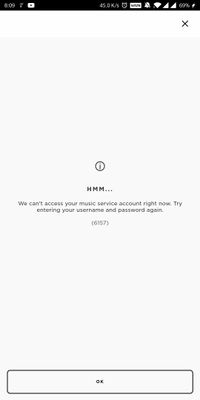 I can't access Spotify via my Bose soundwave 4 system and speakers. Was fine til a couple of weeks ago. Tried rebooting, reinstalling apps, unplugging devices, unplugging router, logging in and out of account  still,  get the above page/ message. Help!

I have been using my Bose Soundtouch system to play Spotify for years.  I don't do that often but I do.  At recent try, when I clicked on a song, the app just go to a blank player and get stuck.  I noticed I can't find my Cinemate from the Spotify app in "Device Available" tab as well.  I can still play other web base service using my Soundtouch App.  I can safely say that it's a Spotify issue.  Please look into that for us.  Thanks.

This also happened to me this past weekend. Soundtouch/Bose tried to problem solve and it is definitely not that system. It has to do with spotify. Looking for answers  too!

AlphaK
Casual Listener
Same thing for me. This last 2 days spotify connect fails to connect to either my SoundTouch 10 or Soundtouch 300. Both were working OK before.
I have restarted both speakers and the wifi, but issue is still there.
It does not matter if I use the Android Spotify App, or Windows client, its the same result.
Reply
1 Like