Does anyone know what's up with this, and how to fix it? 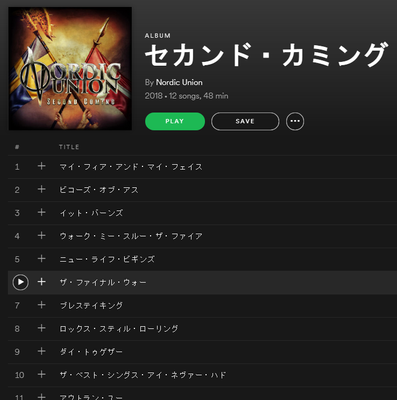 In case it isn't obvious, it's the tracklist for the album 'The Second Coming' by Nordic Union, but the tracks have been replaced by strange characters. The first track is actually called 'My Fear and My Faith'. The screenshot is from an English-language desktop, but I don't think that it's a language problem. I think that what Spotify is showing is not a real language. The same thing happens on a phone. I'm guessing whatever process Spotify has for picking up these names has failed here, but is there any workaround or way to get them to fix it? I have other albums with this problem. It's particularly irritating if you want to play a specific track whose name you know. There's no way to find it that I can see.

Ok I know whats wrong with it.

Check your launguge on spotify and change it to english that will fix it if not check your devices launguge. Also, its japanesse

try messaging spotify about it.

Check out this Ongoing Issues. We are currently investigating this issue and will get in touch with you as soon as we have more info.

Thanks and have a nice day!