Right now, if you go to an artists page on Spotify, it's divided into a certain amount of categories depending on what type of an entry it is. Right now these sections are: Popular, Merch, Albums, Singles and EPs, Compilations, Artists Playlists and Appears On. First of all, a lot of artists don't utilize these fully, which is annoying, but not a dealbreaker. A lot of compilation albums just show up under the normal album section. But I don't think these sorting options are nearly enough.

In my opinion there should at least be a few more sections, my suggestions are: Live Albums, EPs, Singles (divided and not as one category), remasters/special editions/deluxe editions.

This would clean up the artist pages a lot, especially for older artists that have a larger discography where the album section gets really cluttered from all the live albums and compilations. As well as being able to find EPs easier instead of having to sort through all the singles since there, a lot of times, are many singles to sort through without any way to see which entry is an EP and which are singles.

I mean take Nirvana for example, there are 3 versions of both of their most popular releases and 2 of both Bleach and Unplugged In New York. It looks like a mess. Remove the remasters, deluxe editions, live albums and all the sudden you would have three albums under their album section instead of 16. 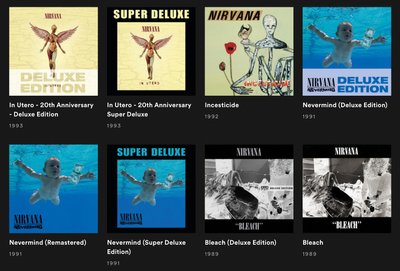 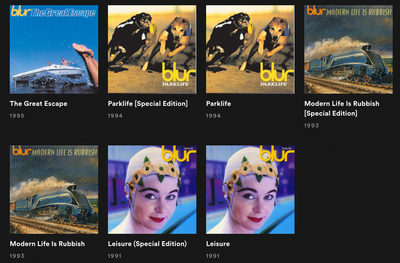 Blur is also a good example with the original release and one special edition for every release in their discography.

Thank you for your post here in the Community.

In this case we suggest that you contact Spotify for artist. You can do it here.