When I try to play music on Google Home from my Spotify app on my Pixel 3 the app is unable to connect to any of my Google Home devices. I select a device in my available device, then it just says "connecting" forever. This issue started last week.

I already tried the following:

It's still not working. Does someone know how to fix this? Thanks!!

user-removed
Not applicable
Can you try a different device?

Here are the steps for reference: https://support.spotify.com/us/listen_everywhere/on_speaker/spotify-on-google-home/

Hope it helps! Let me know if it works.
Reply
0 Likes

Same here with two different phones - since today. It went well for a few weeks, but suddenly stopped working a few hours ago. Both apps (Spotify, Google Home) weren't updated.

One can hear the "connect sound" but nothing happens, Spotify just can't establish the connection to Chromecast.

It still works well with other apps, radio, etc....

I'm having a similar issue.  Can't connect to any of my devices - Denon Receiver, Google Home Mini, nVidia Shield.

The Spotify app is detecting them and showing them as options, but none will connect when I select them.

It was working a few weeks ago with no problems. 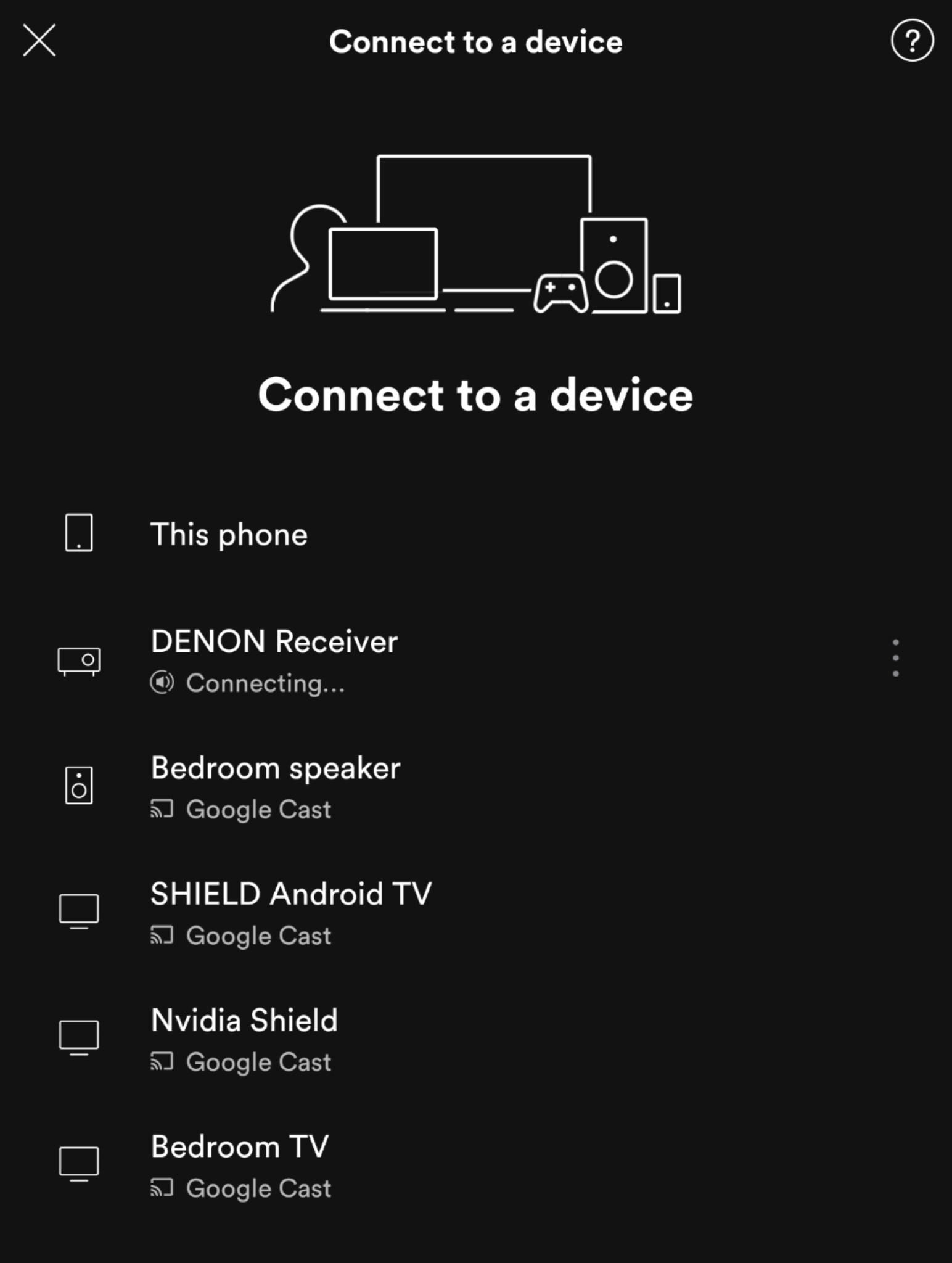 Same issue.  Some songs will connect, about 50% will not.  I've reported this in through customer service.

After yesterday's update to the Spotify app I'm able to connect to devices again , however it's very buggy and as stated above, some songs simply won't play while others will.

Same here. I uninstalled/reinstalled the app on my phone yesterday. Now it seems to be working better.

Install and reinstall used to fix it for me in the past, but has not this time.  I cannot Cast probably 50% of the songs I try.

Just wanted to say both me and my wife now have this issue on two android 9 phones running app version 8.5.33.831 phones are a Huawei Mate 20 Pro and a Moto G6.

The Google home device makes the sound that it has connected and you can control the volume from the phone but the Spotify app says "connecting" continuously.

I have had this same issue for months now, I've done everything imaginable, Spotify is absolutely useless at home now, please provide a fix.

For a few days it's the same behavior with my wifes Spotify account. Two Google Home Mini and a few Google Cast devices (AndroidTV, ChromeCast, Receiver and Google cast enabled media player) won't work. "Connecting..." is showing in the app and the Home devices make the connection sound, but streams won't start. Other apps (e.g. TuneIn or our local media server) are working instantly.

My device mostly works, but sometimes shows the same behavior.

What is supremely impressive is that not only has Spotify not replied to these issues, they are not even coming back to me on my trouble ticket.

If you stuff works, great.  Otherwise Spotify could really give a rip about you.

I'm also experiencing these issues on one of my accounts. I followed this article's advice:

When I logged in on my Pixel 3 under a different user on my family account, I was able to cast to devices on my home wifi network. I've opened a trouble ticket with Spotify for this issue which seems to be associated with my user account.

UPDATE: Seems like this is the issue I've been experiencing: