The New Metal Tracks playlist has been malfunctioning now for at least a month or so. New tracks - if they're added - do not appear in any logical order; half the time there's only one or two new tracks added (again, if we're lucky) while the rest of my playlists (Release Radar, for example) and some of those I'm not following do not suffering from the same neglect. This has already been brought up in a previous thread:

No resolution was reached. In fact, the only contact from anyone affiliated with Spotify was the original from MattSuda at the top of the thread.

My Home screen has become increasingly cluttered with music and playlists in which I have no interest, despite much ado about "taste, data, research, and trends." Speaking of, allow me to direct your attention to Spotify's own research highlighting which genre has the most loyal listeners:

As one of those loyal listeners, and a Premium member for years now, I'm disappointed that this playlist and this genre doesn't seem to matter all that much to the Spotify team. Before the outright neglect that's been reported for weeks now, several songs appeared on the playlist that had no business there, like Nickelback's "Feed the Machine." You don't have to be a metal elitist to listen to that song and identify which genre it belongs to, or at least which genre it doesn't. And if its inclusion was a result of "trends" and the automatic mechanisms thereby hinted at, I can only restate how much disregard and apathy that implies toward the playlist and the genre as a whole (a genre that, you will recall, represents one of Spotify's most loyal demographics).

So with all that in mind, I look forward to Spotify correcting this issue. Or - at the very least - posting an explanation in the interim while a solution is reached.

Lets see if we hear any news.

Come on, Spotify. A lot of people are flagging this as an issue. Just asking for it to be as good as it was just a few weeks ago.

""I use to look forward to Friday's and getting to listen to new tracks and new albums that came out on the "New Metal Tracks" playlist, but for some reason recently you have changed it so that we don't get any new releases, making the name of the playlist not make sense.

It was the best way to discover new bands and new albums, what happened to just uploading the "new metal tracks" to the "new metal tracks" playlist, why does it look like this now just old stuff that’s been on for weeks now, some of them months, just go back to what you were doing before, uploading new tracks to the start of the playlist and the ones from last week below it, easy to see whats new and what was last weeks playlist.""

I will add a screen shot of todays results too later when they update the playlist.

For the sake of convenience/satan: what playlist does anyone recommend to stay up to date with new metal releases (assuming that Spotify won't fix this problem and keep posting the same horrible emocore tracks for underaged drama queens)? Preferably one that contains single tracks from new albums, including singles. Any suggestion is much appreciated!

Honestly not that much now, the best way to keep upto date is follow things on facebook if you use it, like bands, magazines and record labels, but that kinda limits you to not really hearing new stuff unless they mention it in the magazine, ive had some luck with new releases on bandcamp, seem to be switching to bandcamp more now that this playlist thing has happened but you have to look around for stuff and you cant make playlists just browse and buy albums.

things I follow to get some idea of things coming out

And here we are, last weeks "New Metal Tracks" playlist compared to this weeks, don't know how good the quality will be on here but thats a total of 3 new tracks on the new track playlist ..... spotify I give up this is just lazy as fck 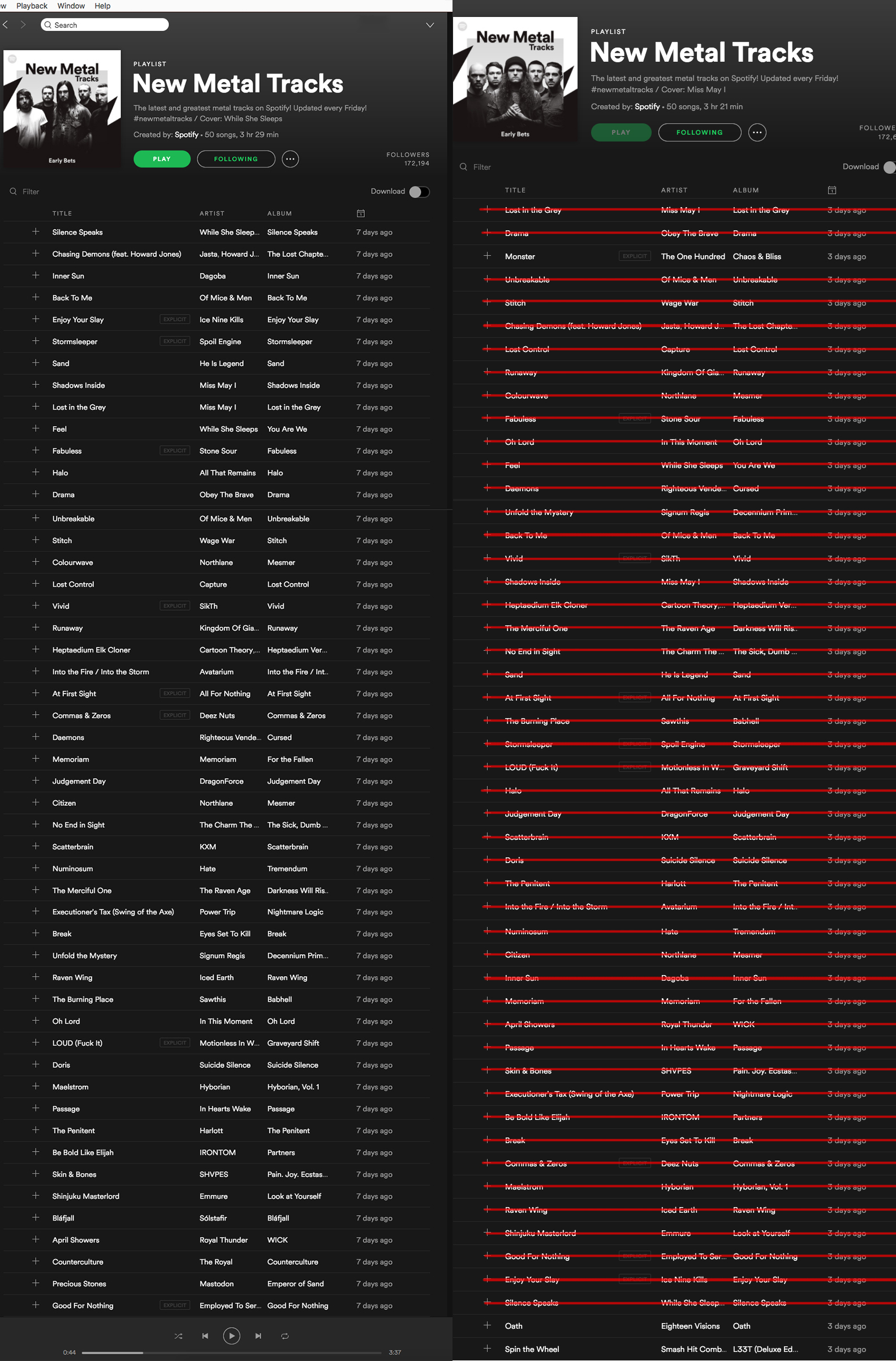 Useless isnt it. I think its just obviously fallen down their list of priorities which is a huge shame, because as someone mentioned in an earlier post, metal fans are big users of Spotify.

Kindly jump in there and reply/rewteet/keep the pressure up (respectfully, as always) until they actually get this resolved. I work in IT and if I took more than a month to fix a problem that multiple users had brought to my attention multiple times (with no updates on my progress in the interim), I might be looking for a new job. So, at this point, either the playlist is actually broken and they just haven't bothered to fix it or they don't care enough about it to maintain it properly. Neither is acceptable.

P.S. My offer to manage the playlist myself or otherwise "be the change" still stands, Spotify. 😉

Let's see what they do today after the complaints, my guess is nothing.

Spotify you had better get on this or I and many others will be canceling our subscriptions.

Still nothing, same tracks just swapped around as 4 weeks ago, I give up.

I'm glad others are as frustrated about this as I am. Bumping this thread in the hopes of an answer

The so-called "Spotify Cares" account on Twitter gave me another empty reply. I'm gonna give it another day or two and just keep hitting them until they get this fixed. Keep up the pressure. Probably won't accomplish anything but I'm too pissed at this point to give up.

Thanks for your comments about this.

We just heard back from the team in charge of this and they've confimed that this playlist automatically refreshes and is based on an algorithm rather than being manually attended to by Spotify staff.

This is the reason the playlist is sometimes jumbled and isn't consistently updated.

I hope this sheds some light!

Respectfully, Grace, that doesn't really shed any light at all.

If machine learning (or lack thereof) is to blame for this, so be it, but the playlist is still malfunctioning. It's called "New Metal Tracks" and hasn't lived up to that name in weeks. I know you're not personally to blame for this, but your reply is just as much of a non-answer as the few dismissive comments Spotify has already thrown our way. This is exhaustingly frustrating.

Will Spotify be correcting this error or not? If you can't answer that, I understand. But why is it too much to ask for a paying customer (going on 4 years!) to speak with someone who can provide an actual solution?

I repeat - I WILL PERSONALLY ATTEND THIS PLAYLIST IF NO ONE AT SPOTIFY CAN BE BOTHERED TO DO IT - the designated algorithm is clearly not up to the task.

myceliom
Music Fan
Thanks for this update. What I am wondering though, is did it *used* to be
updated by a staff member ? The tracks up until a couple of months ago were
all different...and of much higher quality it has to be said!

Your reaction, although understandable, is the reason why people tend to hate big companies: they appear to be responding, but they're not.

As with many things in life, I don't want an explanation, I want a solution. In this case, the playlist used to work, now it doesn't anymore, so we ask for a fix.

A possible fix is the answer 'screw you guys, I'm going home', after which we can make something ourselves (shouldn't be that hard by combining release lists with an algorithm that automatically generates a playlist). Another fix is that Spotify reverts to what the playlist was, which makes perfect sense, since its reason for existence is not the library, but the way it discloses everything.

But atleast give a fix, not a - I have to be honoust here - plain silly answer that helps no one.